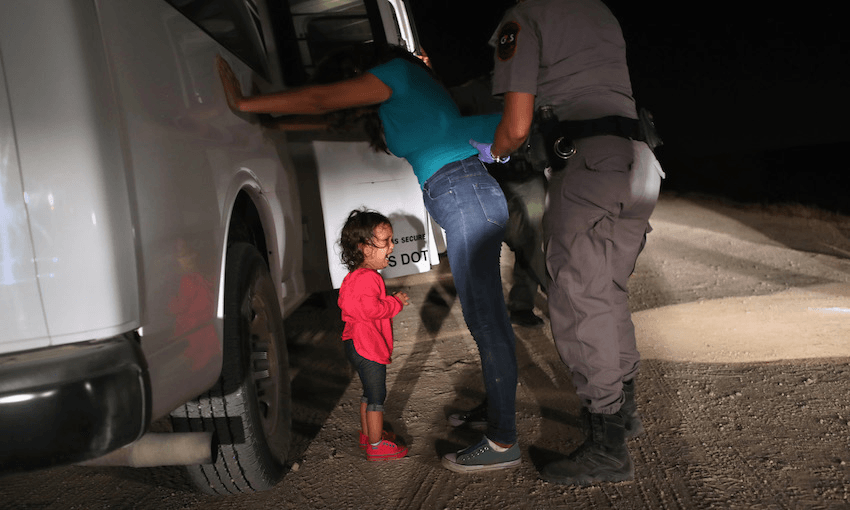 A two-year-old Honduran asylum seeker cries as her mother is searched near the U.S.-Mexico border on June 12, 2018 in McAllen, Texas. The asylum seekers had rafted across the Rio Grande from Mexico and were detained by U.S. Border Patrol agents. (Photo by John Moore/Getty Images)

What can a horrified New Zealander do about children in cages?

A two-year-old Honduran asylum seeker cries as her mother is searched near the U.S.-Mexico border on June 12, 2018 in McAllen, Texas. The asylum seekers had rafted across the Rio Grande from Mexico and were detained by U.S. Border Patrol agents. (Photo by John Moore/Getty Images)

Practical steps to take right now if you’re appalled at the news coming out of the United States.

From the far side of an ocean, we in Aotearoa are watching, horrified, as human rights abuses unfold in real time on the United States-Mexico border. US President Donald Trump has ordered children to be taken from their asylum-seeking parents, held as hostages to get his ridiculous border wall built.

“New Zealand has always stood as a counterpoint to the politics of hate and division. We hold steady to our values and shout them from the rooftops when the rest of the world seems adrift. We speak to fairness and human rights, as we did on apartheid, as we stood against nuclear testing in the Pacific. Now is such a moment.”
– Golriz Ghahraman writes

This week ProPublica shared a recording of children crying for their parents, children who are housed in what can only be described as cages, inside an abandoned WalMart. Over 2000 children in just a month of this new policy, where asylum seekers crossing the border are punished for exercising their rights under international law, by having their children stolen.

The recording captured the voices of kids as young as 4, crying for “Mami” and “Papá” as if those were the only words they knew.

Whether you are poring over Twitter and the New York Times website, gaping at every new atrocity this corrupt and cruel administration embarks on, or avoiding the excruciating sights and sounds of children abducted by the state – a state that is wholly incapable of caring for them – it is hard not to feel helpless if you’re not a US citizen with an elected representative to phone daily.

Starting to get some handout photos from our tour with @HHSGov.

Here’s the Trump mural I mentioned to @chrislhayes inside the shelter for incarcerated child migrants.

Also their beds and the towels they shower with. pic.twitter.com/EPEQ1VGAAF

But there’s actually a bunch of things you can do, even from here. We need not feel powerless. Here are some concrete actions you can take today – World Refugee Day, as it happens – to add your voice of outrage, and pledge what aid you can to these children who are being tortured by a despot who likes to think of himself as the ‘leader of the free world’.

Donate money to those who are helping directly

The most pressing need in Texas right now is legal help for the thousands of illegally imprisoned children and adults.

The leading civil rights organisation in the US, the ACLU, is taking legal action to protect asylum seekers. You can donate to them here.

RAICES is a Texas-based organisation that offers free and low-cost legal services to immigrant children and families. Donate here.

Refinery 29 has a more extensive list of organisations you can donate to who are working with people who have been arrested at border crossings.

Help your American friends and family to exert their influence

As we saw during the attacks on healthcare, one of the most effective things US citizens have done to thwart the Trump administration’s policies is lobby their elected representatives. Hundreds of members of Congress are facing tight election races in November this year, so calling them to urge them to act is a genuinely useful thing to do.

Encourage any US citizens you know, wherever they live, to call (phoning is most effective, apparently) their representatives daily. Right now, voters can urge politicians – especially Republicans, none of whom have signed on so far – to support Senator Dianne Feinstein’s bill to end the family separation policy. Here’s a guide for US voters on how to call their representatives and examples of what to say. You could share this link around your US friends and family, on social media, and by email to make it super easy for them. If you’re on Twitter, share this thread.

Call on our government to protest

Hundreds of people have been tweeting our ambassador to the US, Tim Groser, urging him to pass on their outrage. Great idea, but sadly, not only does Groser not appear to check his Twitter very often, but his role is to represent the government of the day, not us citizens directly, so this may not make much difference, beyond giving him a sense of the depth of feeling over here.

As well as this, then, make sure you call the Minister of Foreign Affairs, Rt Hon Winston Peters (you may have heard of him), to urge him to send a message through diplomatic channels. It might even work!

Call his office on 04 817 8701, and leave a message with his staff, expressing your opinion. Keep it short and sweet. The message will be passed on. You can also email (though phoning is better): w.peters@ministers.govt.nz. He’s not active on Twitter, so don’t rely on that.

Protest to the US ambassador here in Aotearoa

To send a message directly to the US, join the protests in Auckland and Wellington this Friday at 5pm outside the US Consulate and Embassy.

The Office of the United Nations High Commissioner for Human Rights (OHCHR) has told the U.S. that the practice of separating families violates the children’s rights and international law  and the UN Secretary-General has spoken out, too.

By, erm, coincidence, today US Ambassador to the United Nations Nikki Haley announced that the US was pulling out of the Human Rights Council.

The Trump administration’s withdrawal from the UN Human Rights Council, coupled with its abusive use of power at home, only confirms what we’ve always known — Trump is leading a concerted, aggressive effort to violate basic human rights of those most in need of protection. https://t.co/7eDtDQfQV5

Put your hand up, as a citizen of the world, and lend your support to international organisations working to stop US human rights abuses. You can sign Amnesty International’s petition here.

Channel your outrage and energy closer to home

Australia is doing similarly illegal and cruel things in its treatment of asylum seekers. We can protest against this in all the same ways. On the other hand, they take in 20,000 refugees a year, far ahead of our 1500, even on a per capita basis.

Here’s another embarrassing fact: 86% of refugees are currently being hosted by developing nations. Pakistan alone has 1.5 million refugees. Thailand, not even a signatory to the UN Convention, has more than 700,000. The rich world is not nearly pulling its weight.

So how about today, you do something to make Aotearoa a place where many more refugees are welcome.

The news cycle is brutal these days. You’re not alone if you feel bombarded, injured, by the steady barrage of horrors we’re shown each day.

But we need not feel powerless. Turn off the news, follow some of these links, and join millions of other international citizens, each doing their bit.