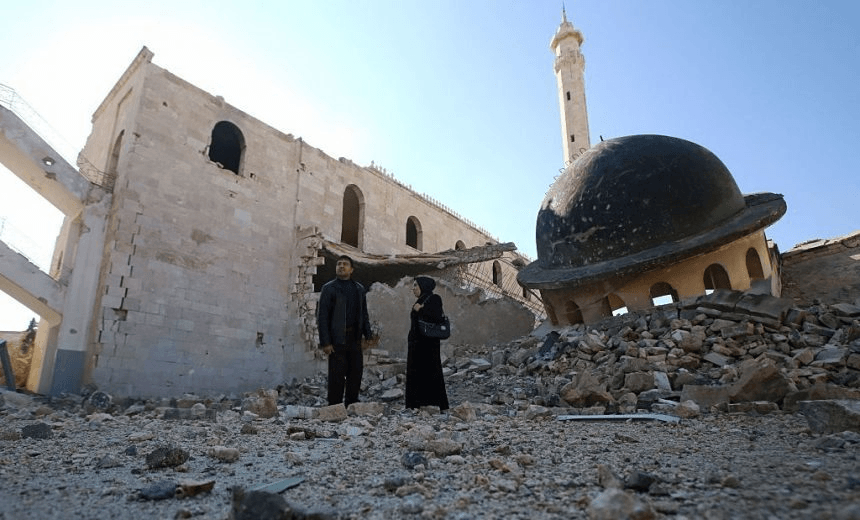 Kefa Jawish (R) and her husband Tajeddin Ahmed walk among the ruins of a destroyed mosque in Aleppo’s Hanano district as they head to check their house for the first time in four years in the city’s northeastern Haydariya neighbourhood on December 4, 2016. Jawish was among hundreds of Syrians returning to east Aleppo in recent days after the army recaptured large swathes of the city from rebels and encouraged residents to visit neighbourhoods and homes they left years earlier. / AFP / Youssef KARWASHAN / TO GO WITH AFP STORY BY RIM HADDAD (Photo credit should read YOUSSEF KARWASHAN/AFP/Getty Images)

When Alan Duff sneers that Aleppo is ‘not our problem’, he does not speak for me

Kefa Jawish (R) and her husband Tajeddin Ahmed walk among the ruins of a destroyed mosque in Aleppo’s Hanano district as they head to check their house for the first time in four years in the city’s northeastern Haydariya neighbourhood on December 4, 2016. Jawish was among hundreds of Syrians returning to east Aleppo in recent days after the army recaptured large swathes of the city from rebels and encouraged residents to visit neighbourhoods and homes they left years earlier. / AFP / Youssef KARWASHAN / TO GO WITH AFP STORY BY RIM HADDAD (Photo credit should read YOUSSEF KARWASHAN/AFP/Getty Images)

I have heard firsthand stories of the atrocities Syrians have witnessed, writes Jay Adams. Duff’s appalling comments are an insult to New Zealanders’ tradition of trying to make a difference in the world.

We no longer grow up in a time when we’re only exposed to problems that affect our immediate community. Instead we all wake up to a newsfeed full of horrors. The scenes from Aleppo in the last two weeks have left me angry and heartbroken. Ignorance is no longer an excuse that we can hide behind. Yet today we saw Alan Duff distance himself from the suffering of innocent Syrians behind the argument that the largest humanitarian crisis of a generation is “not our problem”.

The six years of war in Syria has left hundreds of thousands dead and 3 million forced from their home, fleeing to countries that they’d never even visited before with only the possessions they can carry on their backs. Human beings who share the same planet, just not lucky enough to be blessed with somewhere like New Zealand as a home. And this means it’s “not our problem”?

I’m sure this will sound like more “liberal arrogance” to you, Mr Duff. Some random teenager who gets all their news from Facebook and is only an activist on social media. But I was fortunate enough to be able to visit refugee camps in Jordan earlier this year where I heard firsthand stories of the atrocities people had witnessed.

In a refugee camp I met a 16-year-old boy named Hussam, only two years younger than me. He told me about the day his school was bombed as he sat an exam, and how he found the dead body of his best friend in the rubble. Tell me again how this is “not our problem”. Or better yet why not tell Hussam? Would you be able to tell him to his face that you don’t care about his country, his friends, or his family?

It’s easier to think that it’s not our problem to solve, but where does that end? Do we simply stop caring about anything that doesn’t directly affect us? When you have a weekly opinion column it’s easy to be ambivalent and controversial about any issue you come across. I’ve spent the year volunteering with young people across the country to raise awareness and money for the refugee crisis. I’ve seen just about every type of fundraiser you could imagine: fun runs, lock ins, bake sales, gaming marathons, and the one thing they all had in common is that they were run by young people who care about those in need, who realise that the fact that they can help means they should help.

New Zealand has a proud history of taking a stand on world issues much bigger than itself. David Lange’s brave stance against nuclear weapons was a defining moment in our history, just as this could also be. We must not retreat into ourselves and ignore the world around us. If we don’t help who will?

It’s a different world from the one you grew up in, Mr Duff, and I’m from a very different generation to your own. We know we are no longer just part of a local community but instead a global one made up of brothers and sisters from all parts of the world; real people with real lives who are having everything taken away from them by a war that they weren’t part of. People I now call friends. And I can’t abandon them without a second thought.

Last year you spoke at my school. I even got to ask you a few questions afterwards. I always thought you were a person who used your talents to expose injustice. Once Were Warriors shone a light onto some of the most taboo issues in New Zealand and started a dialogue that still has impact today. It humanised those our society had forgotten. Your column does the opposite, it removes the humanity of the families I met in Jordan. It paints millions of people with a singular brush tainted with racism and apathy.

This isn’t going to go away if we ignore it. The Syrian refugee crisis isn’t going to fix itself if we leave it alone. It’s up to us, all of us, to work together to help those who need it, to lend a hand in whatever way we can. So we can sit back and talk about how it’s “not our problem”, or we can help actually make a difference in someone’s life. It’s our choice.

World Vision has staff on the ground in Syria, Turkey, Jordan, and Lebanon. To contribute to the response please click here.