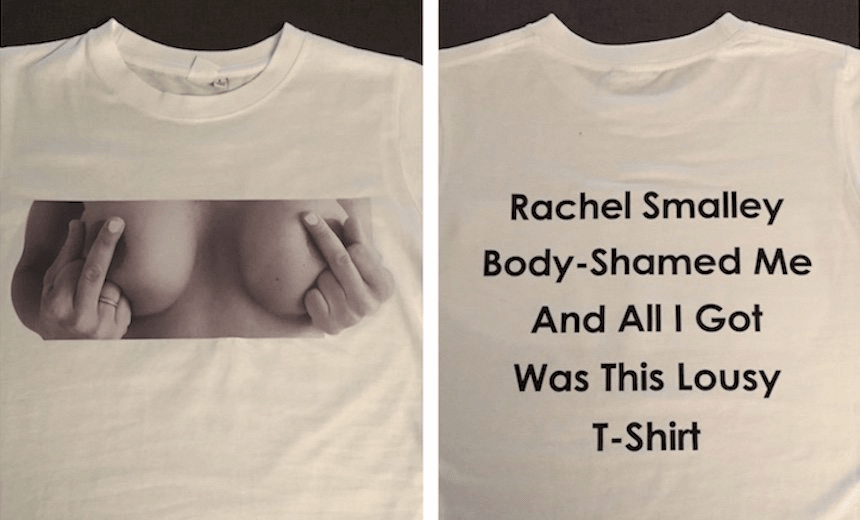 Rachel Smalley’s recent column on the supposed horrors of plastic surgery was a diabolical piece of bodyshaming. For those who’ve recently had surgery, it cut particularly deep. But as Casey McPike explains, a friend of hers found a way to make lemonade out of the bitter column.

Rachel Smalley is intelligent, she’s successful, she supports charities. She’s done some incredible journalism and delivered some hard-hitting interviews. She’s a mother, a committed runner, and a woman who has climbed the ranks in her career. She’s inspiring. Noble.

Rachel is also in the enviable position of being able to reach a great number of New Zealanders, via multiple media forms. She has the nation’s ear. But last week, rather than using her platform to deliver an important and nationally significant message, she used it to take a deliberate bite out of women who’s had plastic surgery. And for my close friend, it felt personal.

In her Valentine’s Day column for the NZ Herald, Rachel set her sights on women who’ve gone under a plastic surgeon’s knife or needle. Boob jobs, in particular, have really gotten Rachel’s natural tits in a tangle. Rachel starts the piece by opining that plastic surgeons like to call boob jobs ‘breast augmentation’. Great sleuthing! Plastic surgeons DO like to call boob jobs ‘breast augmentation’, because that is the medical terminology for the procedure. Enlightened by the first few paragraphs that small nipples are in, and a “B-cup is the new D-cup”, I started getting a bit antsy when Rachel waded into “just be happy with your body; plastic surgery is for weirdos” territory.

“Ooooh, careful, Rachel”, I thought to myself, “Have you forgotten #LardoGate? Remember, that time you accidentally left your mic on during the ad break in your radio show and said that New Zealand women are all a pack of lardos and heifers for having an average weight over 70kgs? People got pretty cross about that”.

So the woman who looks down her nose at any woman who isn’t sub-70 also won’t abide anyone who doesn’t just accept how she is. Then shit got weirder. Rachel, the journalist who has brought our attention to the Syrian conflict and the state of the New Zealand health system, made a cringeworthy leap by suggesting anyone who faffs about with their body is giving up their right to be taken seriously. Equality and a non-natural figure are mutually exclusive, apparently.

I know some highly intelligent, confident and successful women. Some of them have fake breasts, and some of them don’t. Sure, it’s not a flawless, peer-reviewed scientific study, but I’d like to table my theory that the breasts do not maketh the woman. A core component of feminism is the right to freedom of choice. Implying that it’s anti-feminist for women to make decisions about their own bodies is about as anti-feminist as it gets.

There are many reasons a woman may elect to star in her own personal episode of Nip/Tuck. Maybe it’s a breast reconstruction following a mastectomy, a breast reduction to stop chronic neck pain, a spot of Botox so people will stop saying, “why do you look so angry all the time?”, a bit of filler to pad out wrinkles caused by a past life of smoking or sucking on sipper bottles (watch out for that one!), having ears pinned back, a breast augmentation to reclaim a bit of pre-motherhood pertness. Or a breast augmentation just because she fucking wants one.

For my friend, who recently had breast augmentation herself, had shared post-surgery photos on Facebook, and felt self-conscious about how they looked, Rachel’s column felt like a slap in the face. At first my friend felt hurt and angry. But then she decided that she’d take this particular lemon life had lobbed at her, slice it up, and pop it in a gin and tonic.

Since that column, my friend has commemorated Rachel’s sanctimonious drivel with a custom printed t-shirt. She’s had two made, and has sent one to Rachel in the hope she’ll remember to use her privileged platform to build women up instead of picking them apart. Here’s a photo of her wearing the t-shirt to SPQR this afternoon.

That Woman is an awesome woman indeed.