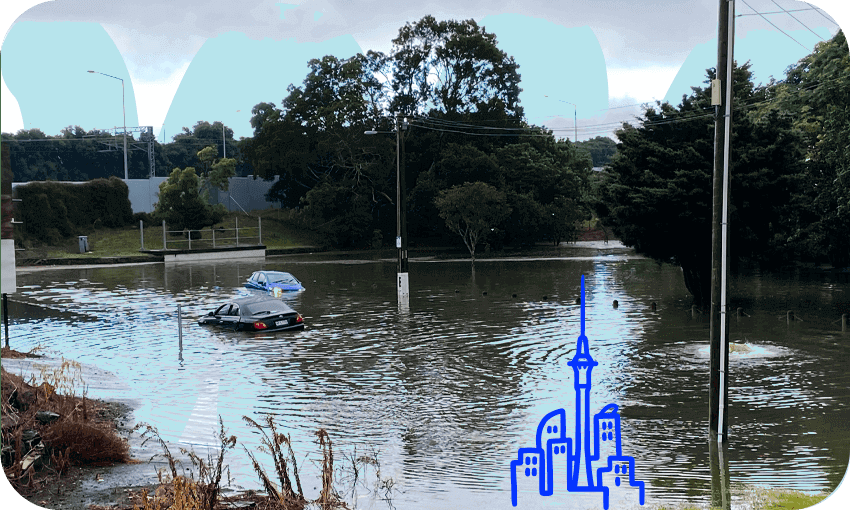 What happened when the heavens opened on Auckland

For a few hours this morning, Tāmaki Makaurau experienced some of the worst rain on record. Stewart Sowman-Lund reports on how Aucklanders dealt with it.

There may be blue sky now, but for much of the morning Aucklanders and those around the northern tip of the country were dealing with torrential rain, thunderstorms, flash flooding and power cuts.

Between 8am and 9am this morning, Niwa’s Albany station on the North Shore recorded 76.8mm of rain – making it one of the wettest hours on record. That was according to Niwa’s own scientists, with MetService quick to jump in and point out that more than 100mm fell on one February morning in 1966. Still, for a Monday in March – today was pretty damn wet. It was also, in a way, quite spectacular: more than 4,000 lightning strikes were recorded in the Auckland and lower Northland regions, with more than 700 in the space of five minutes earlier this morning.

There comes a time every journalist has to leave the warmth and security of the office and head out into the eye of the storm to get the story of “wild weather” first hand. So, armed with just an umbrella and a raincoat, I headed down to Ellerslie village to see what was going on.

The first thing I noticed was the traffic. And then I spotted the puddle – although that feels a bit like an understatement. A line of cars were stuck behind a bus that appeared to have broken down as it attempted to drive through flood waters. Ellerslie Domain, just off the main highway, was covered in a layer of water that spread out across the road into a thigh-high puddle. Some cars were managing to push through, slowly crashing through the floodwater.

One car, some sort of oversized four-wheel-drive thing, sent a wave of water onto a passerby as it crashed through the flood. “My office is over there,” the woman, who was attempting to cross the road on foot, told me as she brushed off water. “I can’t get through. I can work from home but my laptop is in the office.” It was probably worth just taking the day off, I told her.

Emergency services soon arrived to help divert traffic, including a few police cars and a fire engine. Before too long, one of the police cars broke down in the water and was promptly towed away. I then noticed at least two police officers carrying what appeared to be assault rifles. It felt like overkill for what was effectively a traffic job. A police spokesperson confirmed that the weapons were actually in relation to the broken-down car. “Officers were removing their firearms from that vehicle to put into a replacement vehicle,” they told The Spinoff.

On nearby Crawley Street, the road had become more like a lake. Deserted cars, one with its headlights still on and hazard lights ominously flashing, were submerged in floodwaters that had crept up above the doors. A small crowd of neighbours gathered on the street as they waited for emergency services to arrive. A courier van that was faced with the prospect of driving through the floods sheepishly did a U-turn as it approached Lake Crawley.

Over in Onehunga, resident Ellen was on a work call when she heard dripping she initially believed was coming from outside. Instead, she soon discovered water “pouring” through several parts of her lounge roof. Her initial reaction: “FML.”

“I do not want to deal with this,” she told The Spinoff. “I hope the ceiling doesn’t collapse with water and ruins all our stuff.” She managed to move her furniture to stop water damage and the massive TV was safely placed out of the path of dripping water. Buckets were tactically spread out on the floor to collect the continuous drips. Someone was hopefully going to come by this afternoon and inspect the property, said Ellen, but her property manager was unsurprisingly dealing with several leaking properties today.

Elsewhere in Auckland, motorists braved the roads despite the police warning people to stay home where possible. Footage shared on social media showed roads around Auckland CBD and Queen Street partially underwater. Surface flooding meant that three of the southbound lanes heading out of the city were blocked near Penrose. Traffic slowed to a crawl as cars were forced to travel single file down State Highway One.

The Spinoff’s creative director Toby Morris was one of many who experienced more than just a rainy commute. He shared the devastating news on Twitter that his office had flooded and he had lost “a bunch of tech and I think probably most of my old prints”.

My garage/office flooded this morning. Have a lost a bunch of tech and I think probably most of my old prints. 😑 might have to have a water damaged print garage sale soon, hit me up if you art with crinkly edges

Other damage reported included at a number of Countdown supermarkets across Auckland. In Point Chevalier, the Countdown’s roof partially collapsed, causing chaos in-store. It was expected to reopen today, along with supermarkets in Milford, Glenfield and Pukekohe.

The roof of the Point Chevalier #Countdown has collapsed, a company spokeswoman has confirmed. https://t.co/GK2WQdL1Ro

The weather also prompted several Auckland Covid-19 vaccination and testing sites to close, with some unable to reopen today. The three drive-through vaccination centres at Ōrewa, Eventfinda Stadium in Wairau Valley and Westgate in West Auckland are closed, while the drive-through operation at Leonard Rd in Mt Wellington has moved indoors for the day. The Ōtara Vaccination Centre (both the indoor and outdoor sites) has also been closed while staff repair damage.

Auckland Zoo will keep its gates closed for the rest of the day so staff can complete a “full clean-up”.

A handful of Auckland schools, including Ōrewa College and Red Beach School, were also forced to shut their doors due to flooding.

Fire and Emergency has received around 300 flooding related call outs in Auckland this morning. 🌧️

As at 11 am this morning, we have attended 95 flooding related call outs. 🚒

Around 40 crews are now responding to the approximately 200 calls remaining. 📞

The wild weather is now making its way south down the rest of the country. My mum exclusively told The Spinoff it’s now raining heavily in Manawatū after a relatively dry morning. Storm warnings are now in place for the central and lower North Island, along with parts of the South Island.

Here in Auckland, the worst appears to be over. The heavy rain warning has ended and MetService was reporting weather in the region would continue to ease overnight, followed by a largely clear Tuesday. Further rain and high winds are possible later in the week, however, so I’ll keep my umbrella on standby.