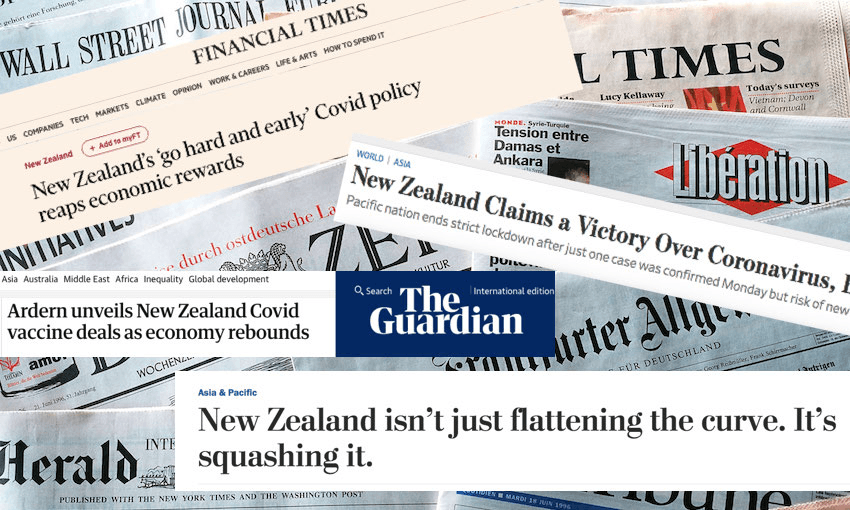 Has the world grown tired of the Kiwi success story? NZ in 2020, from afar

Last year Al Jazeera news anchor Kamahl Santamaria wrote one of our most read stories, reflecting on a tumultuous 2019 for Aotearoa, as observed from the other side of the world. Here he shares his thoughts on how the world saw his homeland throughout another huge year.

I wrote a piece like this at the end of 2019, because I really felt there just hadn’t been another year like it for New Zealand. Certainly as an interested observer watching from 14,000 kilometres away, I hadn’t seen my homeland feature quite so prominently on the world stage before.

And then came 2020, with its global pandemic and general “hold my beer” attitude. I know we’ve all said it countless times, but who could have ever thought the past 12 months would throw what they have at us?

We journalists relied heavily on the word “unprecedented”.

And once again, there she is – Aotearoa, and her team of five million – showing the rest of the world how it’s done. Ka pai, everyone.

Well that would be the simple story, wouldn’t it? But what I’ve noticed over the course of the year – anecdotally and professionally – is that as the pandemic has dragged on and become worse in the rest of the world, people have grown just the tiniest bit tired of the Kiwi success story. Perhaps it’s jealously tinged with Corona-induced weariness, but it’s there nonetheless.

Don’t get me wrong, the overwhelming consensus is still that New Zealand did a terrific job in combatting Covid-19. The proof is in the numbers, and in the Labour Party’s easy re-election. And when The Lancet medical journal and the World Health Organisation are giving you glowing reports, then you’re clearly doing something right.

But New Zealand was fortunate. A small population with geographical isolation meant locking down the country was a lot easier than other parts of the world. When people talk about “applying the New Zealand model” elsewhere, they’re forgetting that we’re not in a one-size-fits-all situation. For example, the United Kingdom is geographically smaller than New Zealand – but with a population of 66 million. It wouldn’t have necessarily worked there, and arguably hasn’t.

Here in Qatar, we haven’t left the house without wearing a mask since March. We can’t enter any public place – a supermarket, a mall, a doctor’s office – without showing a tracing app and wearing a mask. My daughter has been doing online schooling for nine months.

Some of that is my choice and I’m definitely more risk-averse than others – but the restrictions are real and are the law. And there are still 150-200 new cases a day here.

Where New Zealand undoubtedly got it right was in its decisiveness. While the rest of the world was faffing about trying to get their ducks in a row, New Zealand had assessed the situation and already swung into action.

It was, in a perverse way, almost difficult to witness such decisive leadership, while simultaneously watching the ineptitude of so many others. Having not lived there for 20 years, I have no real political affiliation in New Zealand – but like most others, I can’t help but be impressed with how prime minister Jacinda Ardern and her government have acted.

I look on enviously at New Zealand and the relatively normal life that exists there – though admittedly not envious enough to spend 18 hours in a flying tin-can getting there, only to spend two weeks in quarantine for the low, low price of $3,000.

Maybe what I’m saying is this: please, don’t be complacent. Enjoy your relative freedom, and be proud that you live in a country with strong leadership that is envied the world over. But also remember this virus doesn’t give up easily and it’s not going to disappear on January 1, 2021.

In a year’s time I may yet have reason to write another summary of another extraordinary year.