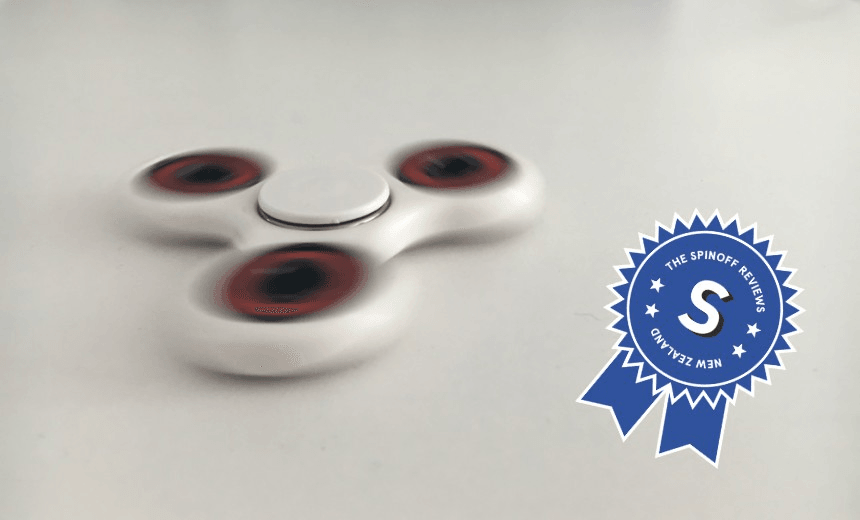 We review the entire country and culture of New Zealand, one thing at a time. Today: Madeleine Chapman finally gets to experience a toy fad.

On Sunday I took my hangover for a walk around Sylvia Park and found myself in front of a stall selling the latest pointless toy, the Fidget Spinner. The young woman in charge of the stall was, if possible, doing less than the minimum to sell the spinners and yet was raking in the sales. Parents lined up with their kids who spent a long time choosing between a plastic spinner, a metal spinner, or a plastic spinner with lights. Having never had any of the fad toys that passed through my childhood, I wanted to get a fidget spinner while they’re still hot. I stood there for ten minutes, too scared to get the vendor’s attention, and more scared that I might throw up if I opened my mouth.

Sitting here in the office with the red and white plastic spinner in front of me, I must admit that it’s easy to fidget with. What does it do, exactly? It just … spins. The box comes with absolutely no instructions or guidelines because all it does is spin. That’s it. It’s a bolt that never tightens.

They’ve been advertised as having benefits for those who have trouble focusing, and anything that helps in special needs education is clearly to be celebrated. But at the same time the appeal to health benefits makes it harder for teachers to ban from a classroom once kids start using them purely for fun. The jury’s still out on whether they’re essentially just another distraction. It’s certainly been a distraction for me (this piece has been a real struggle to write) because I immediately want to do tricks with it. But after Googling “fidget spinner tricks” I am left disappointed, sitting here, sadly spinning some plastic on its bearing. Next they’ll be selling pieces of string for kids to twist around their finger.

Unlike collectible playing cards (any kind) which taught kids how to barter and probably bully their way into sweet trades, fidget spinners seem to be a loner’s game. I can’t imagine anyone at work being too impressed if I threw a spinner in the air and caught it again. But they’d collapse in on themselves if I told them how my nine-year-old self traded her way from one single Yu-Gi-Oh card to a full Blue Eyes White Dragon deck. Actually, I was wrong. No one in the office knew what I was talking about because they’re all old.

Kids will find creative ways to play with anything once they get desperate. When we were younger, my brother and I found some old Zippo lighters in the attic. We occupied ourselves for weeks learning how to light it in cool ways (on your jeans or using just one finger etc). Not only did our fine motor skills improve, we soon learned a valuable life lesson: if you keep trying to light a Zippo on your jeans and failing, when you finally get a flame going your jeans may catch on fire a little.

Whoever it was that saw a little kid absentmindedly spinning the wheels on their roller blades and thought “I’ve got a genius idea”, was absolutely right. But somehow other children are catching on and transforming them into the worst toys. It seems about time for some of the older fads to circle back around.

Verdict: Of all the toy fads of the past two decades, Fidget Spinners might be the saddest. Bring back Beyblades.

Good or bad: As a tool for those who need it, good. As anything else, bad.