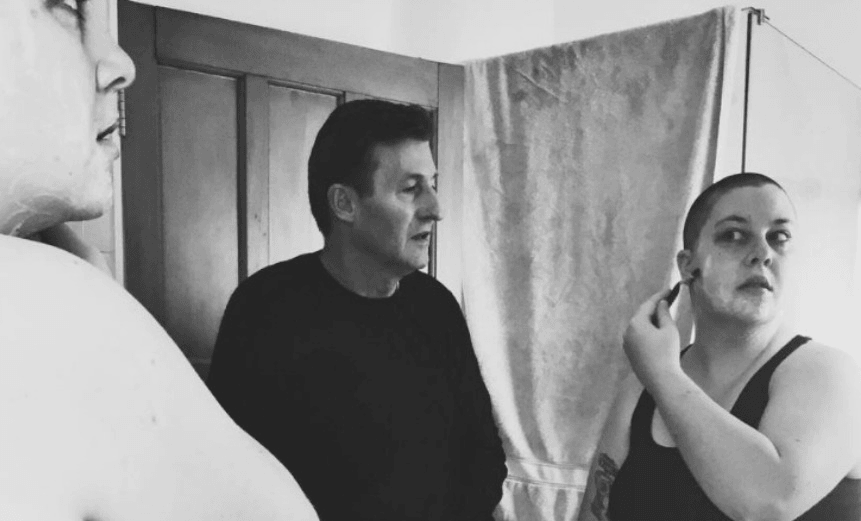 Congratulations, She’s a Boy: I have my very first shaving lesson

We’re back for month two of Congratulations, She’s a Boy, a monthly column following the female-to-male transition of Wellington writer Felix Desmarais.

Great news! One and a half months on testosterone, and like an almost decade-long tradition of uninspiring Labour leaders, my voice is breaking! #TopicalTrans. I just got a haircut. I look like a new man. Which is funny ‘cause, y’know, I am a new man.

I’m pubescent. I can’t skip a single shower and I seem to be inheriting Clayton Cosgrove’s eyebrows. There are toupés glued to my armpits, a number of sebaceous eruptions on my face and undeserved biceps have popped up out of nowhere. It’s great. My moustache may be at least a year away, but my dad taught me how to shave anyway:

Thanks for the awesome response to my first column. I got a comment on the Spinoff Facebook page that asked, “what made you realise you’re trans all of a sudden in November after years of not being aware?” This is a great question so I thought I’d answer it this month!

I stress again that every trans person’s experience is different – some people know when they’re three, or younger. Some people don’t realise til they’re in their 50s. There is no universal trans experience.

Here’s the (very) short answer: Somehow, despite having a gender studies degree, I finally realised that sex ≠ gender.

Perhaps I should elaborate a little. My gender life until the trans penny dropped can be summed up in this short play by award-winning playwright Felix Desmarais:

MY SUBCONSCIOUS: (to no one in particular) Um, I’m a boy.

SOCIETY: In between punches The – shape – of – your – genitals – dictates – your – gender – identity

SOCIETY moves into the shadows, ready to react to any future aberrance by MY SUBCONSCIOUS.

Literally everybody is ‘assigned’ a gender at birth. Usually, the doctor, midwife or parent present looks at your junk and says “it’s a boy” or “it’s a girl”. Weirdly, Dr. Neede didn’t look at my genitals and tell my mother “Congratulations Sue, you have a beautiful healthy camp lady man boy child” because my specific gender identity wasn’t tattooed across my mons pubis (obvi it is now though).

Then I thought about intersex people. Historically (and in some places, currently) a doctor would basically look at the genitals of an intersex baby and decide on behalf of the baby what gender they were. Down the track, the kid might feel like that call was incorrect and could undergo severe emotional distress. Nice one, doc/binary obsessed society.

What is really the difference between a boy and a girl? When you’re in the womb, you’re a girl until you’re a boy after all. So cis boys are female-to-male too. What’s the difference in cosmic time? Seriously. For me, something is a bit ‘off’ and part of it may be my chromosomes and part of it may be my hormones, but most of it is just that society is obsessed with gender binaries. There’s nothing wrong with trans people and a lot wrong with society.

Because when the doctor lifted me up and said you have one of these, what he meant was, you have a human baby who has genitals. Not smooth down there like a Ken doll. Nobody’s gender aligns with their sex, because so-called ‘sex’ and gender are two different, unrelated things. Being a man does not mean being ‘male’ and being a woman doesn’t mean being ‘female’. You just iz wot u iz, baby.

So that’s pretty much how I realised I was trans. And it’s not really that I ‘realised’ – I have known, since I could know, that I was a boy. It’s more that the penny dropped and I realised I could not – and would not – pretend to be a girl any longer, just because of how my genitals appeared to the doctor when I was born.

When I came out as trans, Mum said “you know, it’s a funny thing… all through my pregnancy I thought you were a boy, so I was really surprised when the doctor said you were a girl.”