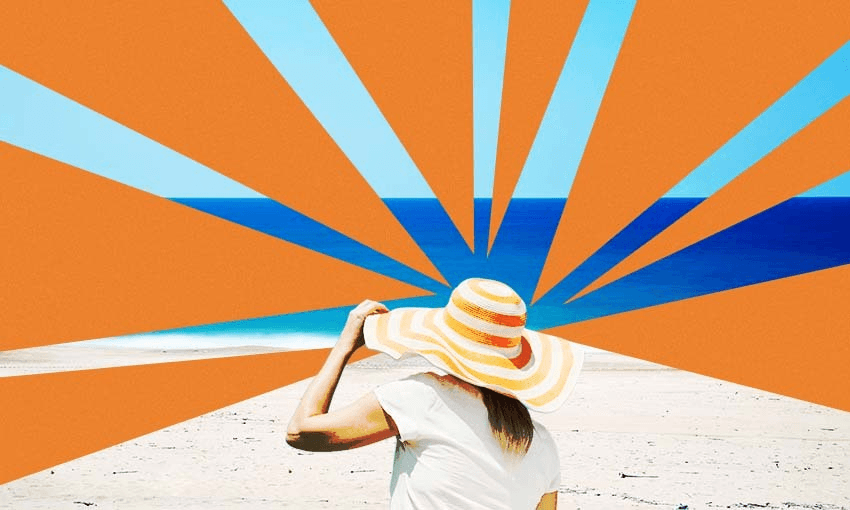 Skin cancer experts are concerned that the pandemic is delaying check-ups for irregular or weirdly shaped moles – and that the imminent summer holiday might make things even worse.

Every summer, we worship the sun. We grill prawns, steaks and veggie kebabs on our BBQs, drink bevvies from ice-filled chilly bins, play cricket on the beach or laze by the pool with a book in hand – all while the sun carves a path across the sky. And our summers are, on average, sunnier than ever. Last summer, Tauranga was the warmest, sunniest and driest main centre, Taranaki was the region that saw the most sunshine (yes, really), and Ashburton recorded the 11th-hottest temperature in this country’s history at 39.3 degrees Celsius.

While we go to great and necessary lengths to reduce the number of deaths on our roads every holiday season, there’s an even more pressing danger that doesn’t get as many headlines. Skin cancers, of which 90% are caused by ultraviolet radiation, are the most common cancer diagnosis in New Zealand. That’s why generations of kids have grown up on the “slip, slop, slap and wrap” message – slip into some shade, slop on a good-quality, broad-spectrum sunscreen 30 minutes before heading outside and every two hours afterwards, slap on a wide-brimmed hat, and wrap on some sunglasses.

Over 2,600 people have been diagnosed with skin cancer so far in 2021. European men over the age of 50 are most at risk of developing the disease, and the risk increases as they get older, yet Māori and Pasifika people with skin cancer are more than twice as likely to die. Melanoma is the more dangerous form of skin cancer, spreading rapidly throughout one’s body if left untreated, but non-melanoma cancers occur more frequently among New Zealanders.

The impact of this year’s Covid-19 lockdown on cancer diagnoses and publicly funded treatment has been smaller and shorter-lived than the disruption seen in 2020, according to the government’s new cancer control agency, Te Aho o Te Kahu. But Auckland plastic surgeon Dr Katarzyna Mackenzie has had far fewer people referred to her for skin cancer treatment over the last 24 months than she’d normally see. And that has her concerned.

Mackenzie observed the trend particularly during the most recent period of delta restrictions, and puts it down to patients not seeing their GPs for regular skin cancer check-ups during the pandemic. Referrals have picked up since lockdown eased, but Mackenzie says there’s another imminent issue that could exacerbate the problem. “It’s the end of the year, New Zealand shuts down for a month because of the Christmas holidays [and] we are going into summer. There’s only so much we can do so there will be further delays because private practice shuts down. Of course, public hospitals carry on but there are waiting lists.”

By the time people do get around to having the largest organ of their body checked, Mackenzie says any skin cancers they may have could have worsened. She emphasises that early detection is the best way to ensure survival. The thinner the tumour, the smaller the chance it will have spread elsewhere, she says, while the thicker the melanoma, the greater the risk it has advanced. On the other hand, some non-melanoma cancers “sit there and grow slowly and quietly” while others can be aggressive if they develop in and around one’s head and neck.

She recounts a recent case in which an elderly woman presented at her practice with a 3cm squamous cell cancer on her arm. The 90-year-old’s daughter said her mother had had the lump for a few months but she couldn’t seek treatment because she lived in a rest home. “Now I have to do surgery, I have to reconstruct the defect because I cannot close it directly,” Mackenzie says. “Elderly patients have poor skin and are often on medication – that makes the recovery more difficult and then increases the chance the tumour may have spread.”

It’s too early to know for certain how much the global pandemic has hit cancer services and survival rates, but MacKenzie points to a recent medical study as a snapshot of the impact.

Published in British medical journal The Lancet in October, the study probed what effect lockdowns and lighter restrictions had on some 20,000 patients from 61 countries (not including New Zealand) with 15 cancer types that could be addressed by surgery. It found one in 10 patients didn’t have surgery because of a reason related to Covid-19, and the rate of non-operation increased with heavier restrictions. “Although short-term oncological outcomes were not compromised in those selected for surgery, delays and non-operation might lead to long-term reductions in survival,” the study surmised.

While the pandemic might have caused some people to delay seeking check-ups, the pandemic has not actually caused delays to scheduled cancer treatments. This is a common misapprehension, says Lucy Elwood, chief executive of the Cancer Society, but in fact the real issue is that the public health system is struggling to keep up with existing waiting lists.

By halfway through 2021, only four of 21 district health boards had achieved the “faster cancer treatment” target, a nationwide goal that 90% of patients with a “high suspicion of cancer” and in need of a referral appointment within two weeks should received their first treatment within 62 days. In the June quarter, just 60% of patients living in Northland DHB received such care and nearly 70% did in Southern DHB. By comparison, Canterbury, Auckland, Tairāwhiti and Lakes DHBs surpassed the target. Elwood says these postcode lottery issues continue to exist, independent of Covid’s impact.

What makes skin cancers harder to track is that a lot of them never get registered in the country’s official record of cancer cases. Elwood explains that specialists in private practice will often perform minor surgeries by cutting out problematic moles, meaning patients may get a diagnosis that doesn’t end up being registered. And some cancers grow so slowly, show no symptoms and pose no real risk to life that recognising these still legitimate cases would lead to overdiagnosis, she says. “It feels weird to say because melanoma is obviously such a bad cancer, but it’s those non-melanoma types of skin cancers that can fall into this bucket.”

Both Elwood and MacKenzie urge people to make use of the health services available to them, with Mackenzie advising people to get the ball rolling now and organise a GP appointment as soon as possible if there’s a skin growth they’re concerned about. In the meantime, she says, wear sunscreen, cover up and seek shade.

“The most popular phrase at the moment is risk mitigation, which we talk about in terms of Covid. The same applies to the sun and skin cancer.”