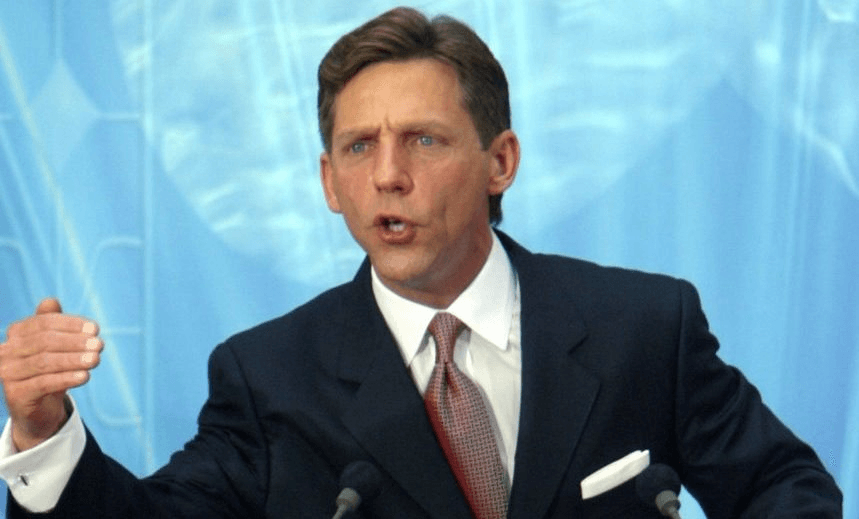 MADRID, SPAIN: US Chairman of the Board Religious Technology Center David Miscavige speaks during the inauguration of the Church of Scientology in Madrid, 18 September 2004. AFP PHOTO/ Pierre-Philippe MARCOU (Photo credit should read PIERRE-PHILIPPE MARCOU/AFP/Getty Images)

MADRID, SPAIN: US Chairman of the Board Religious Technology Center David Miscavige speaks during the inauguration of the Church of Scientology in Madrid, 18 September 2004. AFP PHOTO/ Pierre-Philippe MARCOU (Photo credit should read PIERRE-PHILIPPE MARCOU/AFP/Getty Images)

Hayden Donnell went to the jaw-dropping opening of the New Zealand Church of Scientology on Saturday – you can read his account here. At the event Scientologist-in-chief David Miscavige spoke directly to the crowd. Here, top NZ Scientologist David Farrier attempts to explain what Miscavige is on about in extracts from his address.

Dave M: Here’s your special message of the day. New Zealand holds a unique place in our history …

Dave F: New Zealand was the first country to have a Scientology church out of the United States. Indeed, it does hold a very unique place in the history of Scientology on a global scale.

… with a time track akin to the Māori lived time.

Māori time, New Zealand time, Scientology time: It’s all the same time. We can all relate, through the power of time.

And if you’re not done tracking …

… then suffice it to say yours is one of the few Scientology communities on Earth as old as Scientology itself.

Scientology was established in the 1950s, and brought to New Zealand during this time also. This means the Scientology community in New Zealand is practically as old as Scientology itself. What a marvel!

Not to imply any more than what’s obvious but when advancing up the bridge in this golden age you are also returning to your roots.

The ultimate goal of Scientology is to climb the Bridge To Total Freedom. This is done through purchasing workbooks, audiobooks, and hours and hours of auditing. In doing this, you analyse past trauma (your roots) in order to move on and ascend the bridge.

A golden age of knowledge allowing Scientologists to walk the track of LRH research and development.

Indeed, in 2017 Scientology is as strong and powerful as ever – a golden age – and the perfect time to focus on teachings of L Ron Hubbard.

Well, that’s your track as well.

L Ron Hubbard’s track – his spiritual path, if you will – is your track, too. LRH’s revelation of Dianetics is for all of us. It’s for all of humanity.

A golden age of introductory services for new Scientologists who will light New Zealand history anew. And a golden age of tech phase 2 which also now assumes special meaning at this juncture in your history because today estimated timeframes up the bridge now perfectly match what LRH stipulates in Ron’s Journal 35: From Clear to Eternity.

The Golden Age of Tech Phase II is the largest training programme in Scientology – the Bridge To Total Freedom. It aims to get a Scientologist to a state of Clear, where you are basically peaced out with no stress and the ability to levitate. The content of Ron’s Journal 35 expands on what happens after you’ve ascended the bridge to a state of Clear – which quote possibly involves eternity. It’s exciting stuff.

The purification rundown: four weeks give or take.

Any new Scientologist (or drug user) should go through this process: Basically you take lots of vitamins and spend lots of time in a sauna.

The survival rundown: another four weeks assuming you put in your time (laughter from the audience).

This is a very funny line in his speech, because the Survival rundown is a special type of auditing that makes the person being audited super-aware of what is happening in the “present time” as opposed to what is going on in their past. Present time is a very important idea in Scientology, because as a Scientologist you are always trying to get over past trauma and focus on the present (time).

The lower grades in new era dianetics: a mere six or so weeks, at which point you are either net case completion or clear.

New Era Dianetics is a rewrite Hubbard did on Dianetics, so you can achieve results quicker – like in a mere six weeks. Hubbard liked releasing different versions of the same texts. As a Scientologist, it can get quite expensive as you have to collect the whole set.

But either way you are ready to train as a silver auditor and that one will take about another month or so.

You need to train to audit someone else. A silver auditor is a low ranked auditor. You have to start somewhere.

Whereupon you major out your own mythic timestream within the golden age of tech phase 2 for OTs and that one will speed you to ALS Anzo with a magic exceeding even what power the Ancient Polynesians.

Look, I have no fucking idea what he’s talking about here.

This must be for those in the inner circle.

An OT is an Operating Thetan, which is what you become when you finished The Golden Age of Tech Phase II. I guess after that you can ascend to this ALS Anzo business. It’s beyond me.

And when you touch down your timeframes are all but transcendent with an ETA from new OT 1, to OT2, OT3, new OT4 and OT5 until you enter a skyway from the purif to the new OT7 Solo Naught in less than a year and so become gods of the South Pacific (wild cheering).

Jesus. This is very dense. OT 1 through OT 7 are all levels of Operating Thetan. The higher the number, the further up the chain you are. OT 8 is the highest, which is called “The Truth Revealed”.

So anyway, OT 7 is very high. The concept of getting there in “less than a year” is clearly very exciting and a reason to break into wild applause. Nothing strange about that.