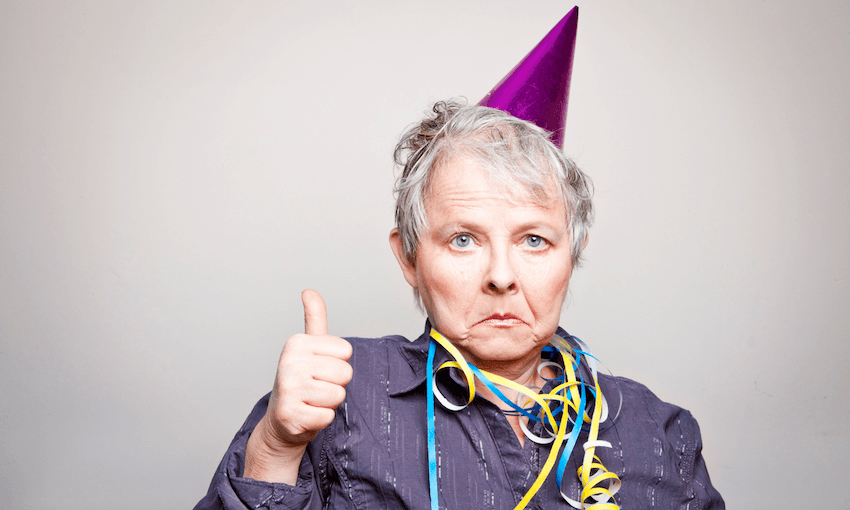 This woman does not want you to wish her Happy New Year.

Official ruling: When is it too late to say ‘Happy New Year’?

This woman does not want you to wish her Happy New Year.

Tara Ward wades bravely into one of the thorniest January questions: how late is too late to greet someone with a cheery ‘Happy New Year’?

New Zealand’s breakfast TV shows returned to our screens last Monday, with their jubilant hosts throwing out “Happy New Year” wishes like an early morning lolly scramble of festive tidings. Breakfast’s Jenny May Coffin questioned the mid-January legality of the situation, but the others didn’t care. “We can say it! Happy New Year, everyone!” said John Campbell, grinning his face off, because it was indeed the New Year and he was indeed happy and indeed, that was all there was to it.

Things were darker over on The AM Show, where Duncan Garner welcomed Netsafe CEO Martin Cocker to the show with a perky New Year greeting, but then checked himself. “Can you still say Happy New Year?” Duncan asked. Martin paused, and I held my breath. This was the moment of truth. “I feel like I’ve been back at work for a few weeks now, so it’s too late now,” Martin replied.

I’ve been back at work for a few weeks now, so IT’S TOO LATE.

That, New Zealand, is the voice of reason.

They’re only three little words, but knowing when to stop wishing people a “Happy New Year” is a social minefield. Every January 1 we go wild about surviving another spin on the Gregorian rollercoaster of life, but come mid January, we’re wading into murky waters. The year is no longer new nor happy, yet we persist in offering up these awkward greetings. Once I wished a colleague a Happy New Year on January 23 and she laughed in my face. Next time I’ll wish her a Sucky New Year. Let’s see how that tickles her fancy.

When does the New Year stop and the Definitely Not New Year begin? Does it end at 11:59pm on January 1, or should we embrace the celebration so wholeheartedly that we stretch it from December into February, much like a fine pair of Christmas fat pants? It’s risky, either way. Ease off the HNY pedal too soon and you miss out on the fun, linger in the zone too long and “it’s too late, fool” will ring in your ears until ANZAC Day. Someone online claimed it’s fine to wish people a Happy New Year until Valentine’s Day. That is fake news, friends. That is fucking crazy.

This madness has to end. “Happy New Year!” needs an official deadline, or people will keep spewing it up all year long, willy nilly, with no regard for time and place. Before you know it, it’ll be Halloween and some little shit who’s sky high on mini-Mars bars is leaning on your doorbell screaming “HAPPY NEW YEAR!” like the devil incarnate. Don’t say we didn’t warn you.

The science is in, the Chaser has been caught and I’ve held several top-secret focus groups (mostly me wishing my neighbour a Happy New Year on January 17 and her blanking me) to find the definitive answer. It is no longer time to look forward to the New Year, but rather, to knowing when the New Year ends.

When can you wish someone a Happy New Year?

January 1: Yes, yes, a thousand yeses. Today, say nothing but those three precious words. Sing them to strangers on the street, mime them through interpretive dance, scream them in your sleep like you’ll never sleep again. Say it to the birds, whisper it to the trees. Let no opportunity pass through your #newyearnewyou fingers. Live the New Year, feel the New Year, be the New Year. This is your moment to shine.

January 2-6: Still yes. Drinketh from your cup of good tidings while it overflowth, and spread that New Year happiness around like it’s an infectious disease that you will never recover from.

January 7-15: The cusp. You’re pushing your luck. You’ve already had a solid seven days to send out a group WhatsApp, how long do you need? Say it if you must, but at least have the decency to look slightly ashamed when you do.

January 16-22: Forget it. It’s practically Easter, and that brand new page in your book of life is already soiled with shame and regret. Your over-ambitious resolutions lie in a steaming pile of failure, you’re still eating leftover Christmas ham, and you think you’re married to Bradley Walsh from The Chase. None of those things are bad, by the way. Let’s fill our empty souls with Creme Eggs and move on.

The rest of January: Stop.

February – December 27: Get in the sea, you absolute beast.