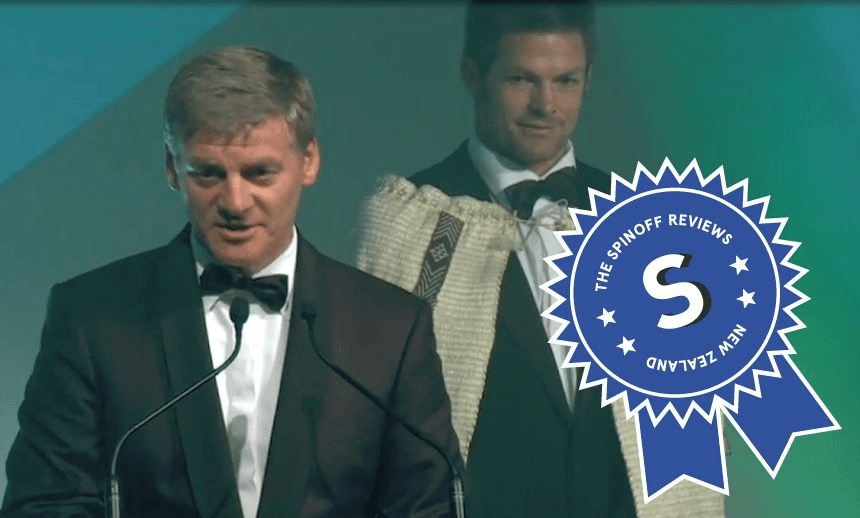 The Spinoff reviews New Zealand #5: The New Zealander of the Year Awards

It ended exactly as you’d imagine it would: with the Prime Minister and Richie McCaw on stage while ‘Poi E’ boomed out across the room and Toni Street and Scotty Morrison clapping on. The night had been long, though unlike all other New Zealand awards nights, it wasn’t because there were too many awards – there are just six – but because there were too many speeches.

Whose would you cut though? Rez Gardi, the Kurdish New Zealander born in a UN refugee camp? Maybe Robert Martin, the disabled advocate raised in institutions who now works around the world? I know – cut Ivan Pivac, the cheerful entrepreur blinded at the age of 12?

And yet it only rarely got cloying. Because of the amount of charitable money sloshing about in the room, the speeches sometimes devolved into naked pleas, and occasionally drifted into tech-exceptionalist self-aggrandisement. But when  it verged on being laid on too thick a group like Randwick Park would get on stage and squeeze your tiny heart until it burst.

Randwick Park is a suburb home to 5,700 in South Auckland, with a third of the population under 15 years of age. It’s fairly evenly split between the main ethnic groups in New Zealand (Asian, Māori, Pasifika, Pākehā), mostly united in living around or below the poverty line. Yet a group of blindingly cool people have banded together to turn the bleak statistics often associated with such circumstances and made Randwick Park look like paradise. On stage, all together, they had a force and conviction to them which hit you in the chest.

They rightly won the Community of the Year. Rightly? I mean, the loveliest thing about these awards also presents as their problem – you’re comparing angels with saints. The person who cured Hep C with people accelerating learning into the future. Ridiculous.

This was nowhere more clear than the main event. Taika Waititi was named New Zealander of the Year over researcher Mere Berryman and the Salvation Army’s Major Campbell Roberts. It felt almost tense to imply that a creative type did more for these weird islands than his competition. And yet Taika’s movies seem to not just contain all New Zealand, in their ornery characters and locations, but to love the unruly and cross-purposed whole too.

It’s really easy for a cynical cynic such as myself to wallow in cynicism about an event like this. Yet being in the room, as corny as it often was, you also couldn’t help but be swept up in the ambitions and deeds of this extremely diverse group. You came away thinking that at some point it might be worth taking a break from doing bad or doing indifferent and do a little good. To have a roomful of people, many of considerable means, all inescapably thinking that way seems like an excellent outcome. / Duncan Greive

GOOD OR BAD? I can’t pretend that I didn’t come away from this feeling quite emotional. Given that emotions are so hard to come by, I’m going to say that’s GOOD.

VERDICT: a cheesy but weirdly affecting night out at the posh old Langham.