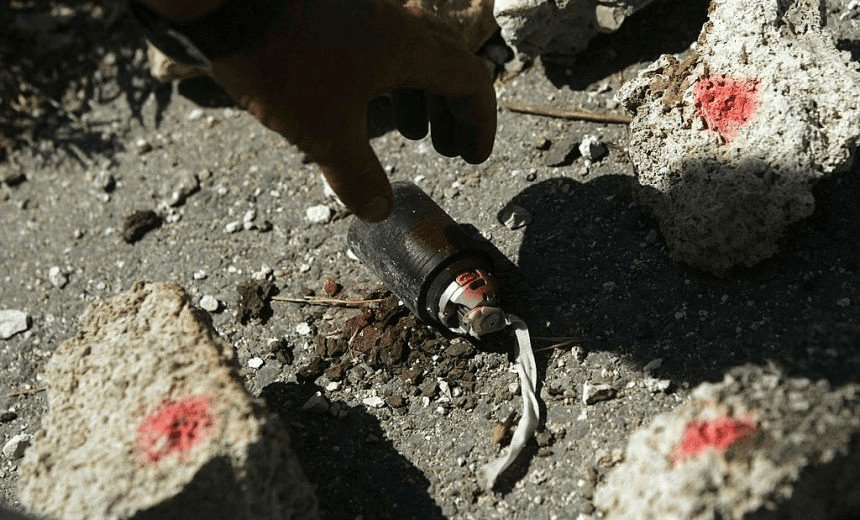 Not ‘a big enough issue’? Why inaction on KiwiSaver and cluster bombs is a betrayal of NZ values

NZ has been a world leader in eradication of cluster bombs, landmines and nuclear weapons. Where today are the moral principles the National government has shown before, asks Amnesty International’s Grant Bayldon.

On the 16th of April this year, in a village in Yemen 10 kilometres from the Saudi border, two brothers aged 9 and 12 were playing while herding goats near their home. The family had only recently returned after fleeing Saudi airstrikes – a brutal campaign which has been targeting schools, hospitals and homes alike.

The younger boy picked up two soda-can-sized metal cylinders lying in the dirt. He offered one to his brother so they could have one each to play with. But it exploded, tearing the older boy’s abdomen open and his arm off, and taking his life. What the young boy had given his brother was an unexploded sub-munition – the technical term for the hundreds of mini-bombs that cluster bombs break into and scatter widely. Inevitably, many fail to explode on impact.

Now the family are too afraid to graze their goats. “There are bombs hanging off the trees”, the distraught father said. But other farmers still do – they have no choice if they want to feed their children.

The weapons manufacturing industry is a powerful force. But just occasionally, the world comes together to agree that a weapon is so inhumane, so utterly horrendous in its impact on civilians, so outrageously immoral, that it must be banned.

We saw it with the banning of chemical weapons. Then came landmines, finally made illegal in the late 1990s. And most recently cluster bombs, outlawed internationally in 2010.

Now an investigation into KiwiSaver investments has shown that fund managers – including some of the government approved default schemes – are investing New Zealanders’ savings into the manufacture of the world’s most hideous weapons: cluster bombs, landmines and nuclear bombs.

Apart from being funded by KiwiSaver, there are some things that these weapons have in common. Firstly, they are indiscriminate, meaning it’s practically impossible to use them in a way that distinguishes between combatants and ordinary civilians. Secondly, they continue to kill or maim for decades. Cluster bombs and landmines do so by lying hidden until children or farmers stumble onto them, nuclear bombs through the radiation impacts. That’s the reason using any of them would be a war crime.

But there’s something else they have in common: New Zealand was a world leader in standing up against each of these weapons. This took courage in the face of powerful countries and the corporate weapons lobby.

Take cluster bombs. In the words of National MP Georgina Te Heuheu, the then minister responsible for getting our own legislation banning cluster bombs through parliament, “New Zealand has a profile on disarmament and arms control issues far above our size or place in the world … I am proud that New Zealand is truly committed to a world without cluster munitions, and that I stand to represent the Government and the people of New Zealand in making that stand.”

And so when it adopted its own law, criminalising any investment in cluster bomb manufacturing, the government took a tough stance. It set not only a $500,000 fine, but also a stiff seven-year prison sentence for anyone knowingly investing in cluster bombs. As chair of the parliamentary committee, National MP John Hayes, said in parliament at the time: there would “be a reasonable expectation that fund managers and investors would investigate the full portfolio of a company before investing, in case prohibited activities were involved”.

Yet just seven years on there’s little to be seen of the moral principles that the government previously displayed on the world stage. In the words of John Key when asked whether the government would act in response to the KiwiSaver revelations, “I don’t think there’s a big enough issue to really argue the case”.

But there are three reasons why Amnesty International believes that the government must act.

The first is that by automatically enrolling people and subsidising the investments through tax credits, the government is facilitating investments being made in illegal and immoral weapons.

Secondly, the government is far better placed than individual citizens to understand the horror of these weapons. As a UN Security Council member it has been intimately involved in trying to stop their proliferation and use.

And finally, information on what the funds are actually invested into just isn’t that easy to get. It took RNZ and the New Zealand Herald a thorough investigation – and that information will soon be out of date. Most of us don’t have the time to do that sort of digging.

All KiwiSaver providers have to meet a set of government approved criteria; with the stroke of a pen the government could add the requirement that funds not invest in any illegal weapons.

We don’t need a debate on what the government’s stance should be on this – we’ve already had it. As a country we have committed internationally to doing all we can to eradicate the scourge of cluster bombs, landmines and nuclear weapons. New Zealand was an international leader in this. We must have no part in the deep hypocrisy of inflicting the misery they bring on others.