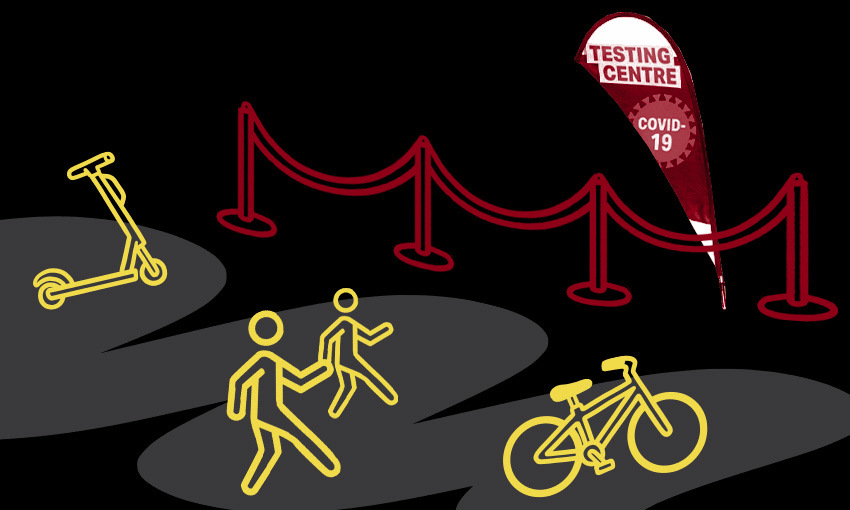 No car? Good luck getting a Covid test

As demand for testing grows, so does the plight of those without a car but with a need for a test. Cyclist Gabi Lardies finds out what happens when a non-driver visits a drive-through.

Many a hungry cyclist, pedestrian and scooterist has experienced the tyranny of the McDonald’s drive-through late at night. If you try to walk, cycle or scooter through, service will be refused. McDonald’s claims to “support the health and environmental benefits of cycling”, yet it is the company’s policy “not to serve cyclists using the drive-thru lane or drive-thru service windows”. They believe it is unsafe. As a cyclist who shares roads with Ponsonby’s SUVs, I have insisted it’s fine, but staff are adamant – no car, no Big Mac.

The drive-through concept has been adopted by many of our Covid testing and vaccination centres. But it’s not clear from official communications whether these testing centres would treat a carless person like McDonald’s does. Would they turn us away, laughing?

Molly Magid is a proud cyclist from Ōtautahi. Hers is one of the less than 8% of our households that doesn’t own a car. Getting around is not usually a problem for Magid, but when she woke up sick on a rainy Friday morning, getting a Covid test proved tricky. She was directed to the Orchard Road Covid-19 testing centre, but apart from being a 40-minute cycle away (in the rain), it’s set up predominantly as a drive-through service. There is no phone number online she could call about her two-wheel, leg-powered mode of transport.

When Magid looked at her local Covid test providers on the HealthPoint website, she found many of them required people to register as patients. She ended up convincing a GP to test her, but even there she was treated as if she should have a car. She was made to wait in the parking lot, while it rained, for an hour.

“I found it so striking how everything was built on the idea that everyone has a car, like even the structure of the testing centre,” said Magid. “It’s absolutely like a garage – you drive through it, it’s completely centered around people waiting in the parking lot.”

It seems the Covid response follows familiar patterns of perpetuating the need for a car in New Zealand. Because so many of us have cars, infrastructure is built to accommodate them – making it more essential to have a car. But this can’t work forever – there are only so many extra lanes you can clip on the Harbour Bridge.

Although last year a man warmed hearts by cycling through a testing station in central Gisborne, Magid was right to be cautious – and the situation is better in Canterbury than in many parts of the country. We asked Canterbury DHB about testing capacity for walkers and cyclists, and were told: “All four of our community testing centres accept walk-ins. Walk-in testing is done in a tent at the sites.” A member of Cycling in Christchurch has found this a “painless” experience, but with only three community testing centres to cover the whole city (the fourth is in Ashburton), as Magid found, it’s not ideal if you’re not close to one – especially if it rains.

And it gets worse if you’re carless further north. A representative from the Northern Region Health Coordination Centre (NRHCC), operating the regional response to Covid in Auckland and Northland, said testing sites “cannot allow a bike to cycle through a drive-through lane”. So it appears the signs stating “VEHICLE REQUIRED FOR COVID TESTING” that cyclists in Portland in the US have been met with are applicable here too.

NRHCC said cyclists in their districts must access sites with walk-in capability. On the HealthPoint website, some centres state “For safety purposes, we cannot provide walk in services for testing”, others are drive-through and walk-in, a handful are walk-in only, and others do not specify.

Last week, carless Aucklander Alice Lee walked 40 minutes to her closest testing centre on Balmoral Road. She had to “zig-zag” through chaotically queued cars and found it difficult to decipher where the walk-in entrance was. People were yelling from cars to security guards positioned around the gates, who also appeared confused. When Lee was finally directed across the carpark to a hot tent, she was advised there was a four-hour wait, and that people had been there since 6am.

Cycling Action Network spokesperson and Wellingtonian Patrick Morgan has cycled to his local testing centre on Taranaki Street – which allows walk-ins. He was advised where to park his bike, made to feel welcome and had “no problems”. This was in 2021, though, when testing centres were not dealing with the volumes of people they are now.

So across the country, it’s clear community testing centres have been predominantly designed with vehicles in mind, and have missed clear messaging, and unified processes, on how to cater for the carless. This car focus also poses another problem when demand is heavy, as it is now: on Tuesday, Auckland police had to put out a warning for motorists to avoid areas around certain testing centres as queues of cars were creating traffic chaos.

Out of the urban centres, meanwhile, the situation gets worse for the carless. In Mangawhai, north of Auckland, HealthPoint shows a little purple bubble on Mangawhai Pharmacy, but clicking through reveals the only testing carried out here is for travel or court purposes. The website directs people to the closest testing centre in Wellsford, a one-hour and 45-minute cycle or six-hour seven-minute walk away. It’s only open on weekdays from 8.30am until 4pm.

There already have been multiple solutions to problems with access during the pandemic. Last year, iwi including Waikato-Tainui, Ngā Puhi and Ngāti Ruanui deployed mobile units for their communities who faced barriers in accessing testing. In Tāmaki Makaurau, the same concept was applied to vaccination – the unforgettably named “Shot Bro” vaccination buses. Rather than assuming everyone has the freedom of movement, and time, to go to testing or vaccination centres, these services go to where they are needed.

With our PCR testing capacity at a “crisis” point, Auckland community testing centres are now handing out rapid antigen tests for people to take home instead. Shifting to RATs eliminates testing infrastructure, allowing tests to be distributed with more ease. The widespread use of RATs has previously been signalled for phase three of the omicron response, which we’re expected to move to this week. In this phase, RATs will be available through doctors, pharmacies and workplaces, so hopefully, Mangawhai residents needing a test won’t have to travel to Wellsford; they’ll be able to pick up a test from their local pharmacy. The Ministry of Health has already been providing RATs to organisations who support priority populations – but a list of these providers is not available yet.

For those of us without cars, the widespread use of RATs will mean tests are available closer by. Instead of attempting the drive-through, we’ll be able to buy the Big Mac secret sauce and make our own delicious burgers at home. Until then, carless people (with symptoms or close-contact status) must make their way to their GP, dodge cars queued at walk-in/drive-through centres, or find a rare walk-in only centre.