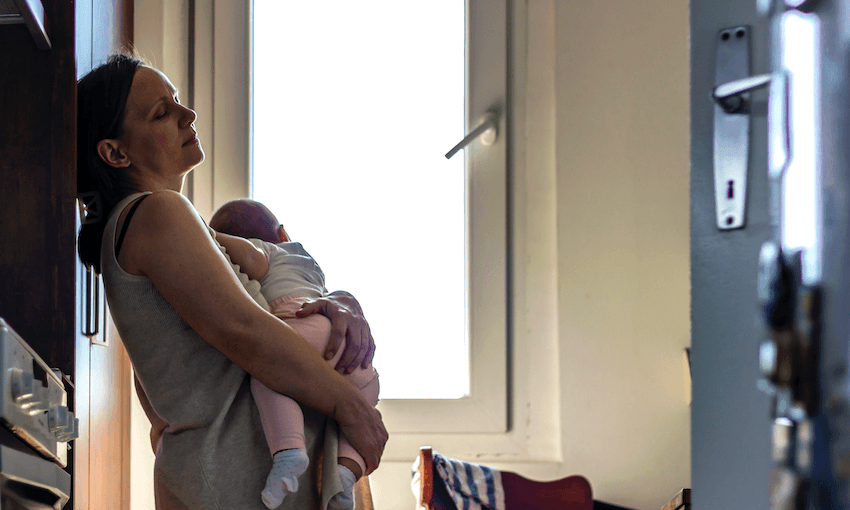 ‘Symptom of a broken system’: Women share their experiences of birth trauma

The effects of having a difficult labour can be profound, but medical complications are just one part of the story. As Ally Bijl-Brown explains, it’s also about the treatment mothers receive in our under-resourced maternal health sector.

Globally, research tells us that up to a third of women who give birth experience birth trauma. But there’s no current research into the prevalence of birth trauma in an Aotearoa New Zealand context.

Often birth trauma is due to medical complications surrounding the birth, but this isn’t the full story. The way women are treated in the health system can also lead to a trauma response after the birth.

About a year ago, as part of my PhD thesis, I spoke with women about their experiences of difficult and traumatic births. While there’s a lot of research out there about birth, much of it is focused on the medical outcomes for the baby, and the women’s/mothers’ voices can be lost. I use the term “woman/mother” because again, in the research, often it seems as though a woman ceases to be an individual once she has given birth. Her identity morphs into something else entirely based on another individual entity.

The women I spoke to were often hurt and angry about how they were treated, but also able to recognise that poor treatment was a symptom of a broken system, not the fault of any specific staff members.

Lack of communication and information provision was a major issue for the women I spoke to, often leaving them feeling vulnerable and ill-informed. Many of them felt as though staff were not informing them of their rights, of the possible outcomes of their births, how inductions worked, options for their C-sections, and general information following the birth, for example the baby’s weight, gender or even if their baby was alive.

Women identified that these communication issues put them in a “really vulnerable position”. Others were not able to name this, but it was apparent that the lack of communication made them feel out of control and powerless. As Tracey sobbed to me in the retelling of her birth story, “They were just doing all this stuff to me and I didn’t understand what was happening and, like, what the hell’s going on?”

Most of the women assured me that despite some negative experiences with medical staff, they knew this was not necessarily the individual staff member’s fault, but more of a broader systemic issue.

Several women spoke about witnessing understaffing and burnout. For some this meant not getting their primary midwife for the birth. Jean told me, “I had my secondary midwife at my first birth and I’d never met her, she didn’t know me.”  Jean had built up a trusting relationship with her primary midwife, and did not have confidence that her secondary midwife knew critical details about Jean herself or her birth plan.

For others, not only were midwives unavailable for the births, but the women described the assigned medical staff as burnt out, tired and thus unable to do their job, or unable to emotionally connect any more than the job required. Chantelle said, “The midwife was tired, we were all tired.”

Similarly, Georgina perceived there to be a significant shortage of midwives and maternity nurses, and worried this would result in mistakes:

“There is such a shortage of midwives and nurses in that area. You’re gonna end up with the people that are working there being really jaded, really tired, really shitty.  Making mistakes and not being in good moods and impacting health, impacting people’s experiences… And most of the midwives at the hospital were really shitty.  Like I’m not saying that they were mean to me or anything like that, but they were just brusque and shitty, like all of them were having a bad day all the time… you know you’re gonna have this negative person come into the room, and so you put off as much as possible asking for help, because yeah, everyone’s a bit shitty. So yeah, I hope that there’s more funding.”

Frances echoed this, talking about the importance of perspective. For the midwives and doctors at the hospital, birthing the baby was their everyday, but for the women coming in, it can be once in a lifetime. “’Cause this is your everyday job, but this is like a once-in-a-lifetime, biggest experience in someone else’s life that, you know, like, they need that extra little love.” Brusque treatment or lack of availability of staff meant Frances felt unsupported, and perhaps if her physical experience had been the same but her emotional experience had been different, she would not have experienced such a significant traumatic response to the birth.

Tracey also noted that it was not only the women who were negatively impacted by these systemic issues but also the hospital staff themselves: “One of the midwives, she got really upset, she’s like, ‘I want to give you the best care that I can, I’m so sorry it took me so long to come in. There’s no one!’” It’s clear the staff were experiencing distress and burnout and, in Tracey’s case, expressing this to patients.

Finally, some of the women described their experience of the physical hospital as a metaphor for the care they received in the maternal health system. Tasha and Laura both described experiences that, to me, symbolised some of the cracks in hospital care and the positioning of women/mothers in the hospital system as secondary citizens. Both describe being positioned far away from their infants down a dark corridor. Tasha said, “I feel like I had just been dumped down the end of a long hallway in the dingy section, like we weren’t important”. Similarly, Laura said:

“You know, when the mother is well enough to be discharged, you don’t get to stay with your baby in the same ward and I realise there’s a space issue, I get it, but you get transferred to this other ward – I can’t remember what it was called, like across all these hallways and down in this dark … and… it’s horrible, it’s dark.”

Laura felt alone and abandoned and far away from her baby. Her experience also impacted her perception of the hospital: “there’s not enough space, I get it”. Laura also described the feeling that the hospital was “very much pushing to get her out”. Similarly, Eswari and Frances both described being “kicked out” of the hospital as beds were needed for others.

The narratives of these women highlight issues with communication between staff and patients due to burnout or lack of staff, leading to women feeling ill-informed and vulnerable in the health system. It’s quite clear that this is not an issue with individuals, but a systemic issue of chronic underfunding, leading to staff working overtime and burning out for their patients. The message I received through these stories is that maternity care is just not valued in our society.

My research does not address whether these are objective issues in the health system, but it’s important to consider women’s perception of them, given the implications for trust in the system. Perceptions of care have a concrete, objective impact on mental and physical health outcomes.

I add to previous pleas from women who have experienced birth trauma and a lack of care from an under-resourced maternity health system. We need this government to prioritise the needs of women/mothers.

All names and identifying details have been changed

The writer’s PhD research is a feminist, strengths-based analysis of birth trauma and difficult births, and the strength and resilience that women have in facing challenging times in their lives. Thanks go to the brave and resilient women/mothers who shared their stories to create social change.