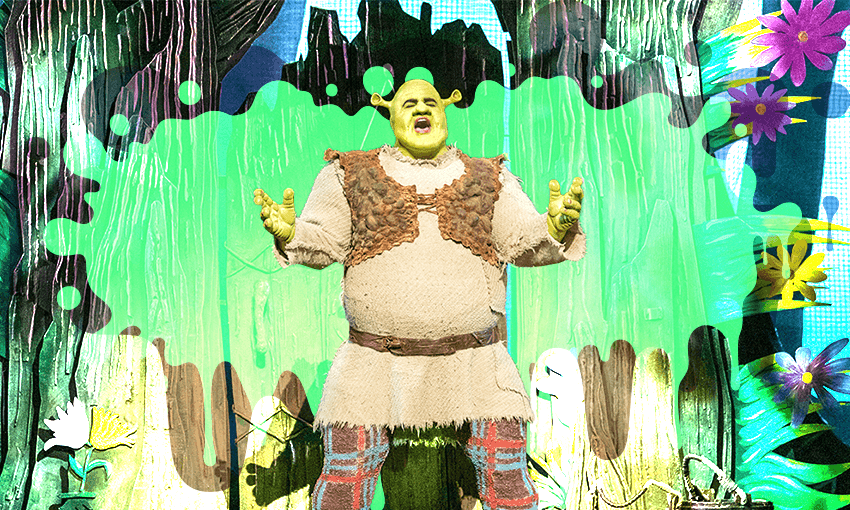 Ever wondered what’s it like to step into the famous ogre’s giant, stinky boots? Shrek: The Musical lead actor Tom Knowles tells all to Alex Casey.

Nobody relates to the phrase “ogres have layers” quite as literally as Tom Knowles. His layers begin with a sweat singlet, followed by a hi-tech jacket lined with ice packs, followed by a full-body fat suit. From there, a pair of thick padded woollen trousers, followed by a prosthetic head, then a shirt, then a waistcoat, then a towering pair of boots, then a giant pair of hands. Then comes the facial prosthetics, delicately applied to his chin, nose and forehead.

Buried beneath all those layers, around three hours later, is a man who says he has been waiting most of his life to become the swamp-dwelling Scottish ogre named Shrek.

Knowles was around nine years old when the animated fairytale comedy stank up popular culture. “Our family has always been massive Mike Myers fans,” he explains. “I grew up thrust into Wayne’s World along with the Austin Powers movies – those were the ones we would watch on repeat.” He believes the enduring appeal of Shrek, over 20 years later, lies in the humour and the messages in the film. “It has that same formula that pantomimes have, where it appeals to adults and children, and I really think that the musical has the same secret recipe.”

Growing up in Blenheim, Knowles says he has always had a soft spot for musical theatre – not the normal pursuit for a young man who was also a big, burly rugby player. He starred in nearly 40 roles before he even made it to drama school, but was always aware of the lack of leading roles for people of his frame. “There’s never been a whole lot of roles for guys like myself in musicals, especially when you’re looking for a Danny Zuco in Grease or a disco dancer in Saturday Night Fever,” he says. “That’s why Shrek is such an anomaly.”

Not to be confused with its unauthorised burlesque counterpart, Shrek: The Musical is the official musical production based on the 2001 Dreamworks film, arriving in Auckland, New Zealand for the upcoming school holidays. First encountering the musical in 2013 as an intern in London’s West End, Knowles recalls seeing the Shrek lead actor arriving at the theatre hours before showtime to start his prosthetic transformation. “I was fascinated by the fact that it takes hours and hours for him to get into the magic of the character.”

Since then, Knowles has had many different theatre roles, but his sights have always been set on Shrek. “I was definitely into the idea of Shrek being this big, loud, bold sort of unapologetic guy. That has always sparked my interest, because that is how I am – this big guy trying to fit into all these pretty little shows,” he explains. When it was announced that the West End show would be coming to New Zealand in 2021, Knowles says he jumped at the chance to send in a self-tape for its open audition.

Unfortunately for his neighbours, that meant several days of rehearsing Shrek songs, including beloved tracks from the film like the Smashmouth version of ‘I’m a Believer’ and bespoke Meatloaf-style belters like ‘The Ballad of Lord Farquaad’. “No official complaints but a couple of closed curtains,” he laughs.

After he found out he had been cast in the lead role, Knowles got to work preparing for the prosthetics. Because this is New Zealand, his father-in-law starred as Gloin in The Hobbit, so had barrels of advice for keeping cool in the Shrek suit. “The thing is, they had personal trainers and had to go into training to survive in prosthetics for that amount of time,” says Knowles. He has slightly fewer resources at his disposal. With an 11-week old baby and only weeks till showtime, he’s going for runs and wearing “a bunch of hoodies and beanies” to prepare for the extreme heat onstage.

“If you can imagine, it’s like going into your wardrobe and putting every single item on and then deciding that you’re going to go for a full run while singing eight Celine Dion numbers.” He’s donned the full Shrek outfit a couple of times already, and laughs as he recalls the very first outing in full costume – including the infamous jacket lined with ice packs. “The ice packs hadn’t been in the fridge for very long, so I got extremely hot,” he laughs. “I felt like I was in fainting territory within minutes of having the entire suit on.”

There’s something else in the lining of the Shrek suit that helps the performance – the names of past Shreks who have defended swamps in days gone by, including creator Brian d’Arcy James. “It’s quite surreal and actually gives me some goosebumps seeing his name and putting on the original Shrek costume,” says Knowles. So, despite the extreme heat that the ogre’s layers may bring, Knowles is promising a hell of a show. “It is a laugh-out-loud comedy, it’s extremely family friendly but also extremely funny.”

The swampy set is worth $1.5 million and is coming directly from the UK and Europe tour with “all the bells and whistles”, but Knowles says he doesn’t feel too overwhelmed about stepping into Shrek’s world-class boots. He’s been rewatching Braveheart to get the Scottish accent nailed, and he learned his lines months ago thanks to Covid delays. “I suppose I do feel pressure to represent Shrek in a way that is honouring the movie and Mike Myers,” he says.

“But honestly, I don’t feel pressure to be Shrek because I feel like I’ve always been Shrek.”

Shrek: The Musical arrives in Auckland in July for the school holidays. Find tickets here.