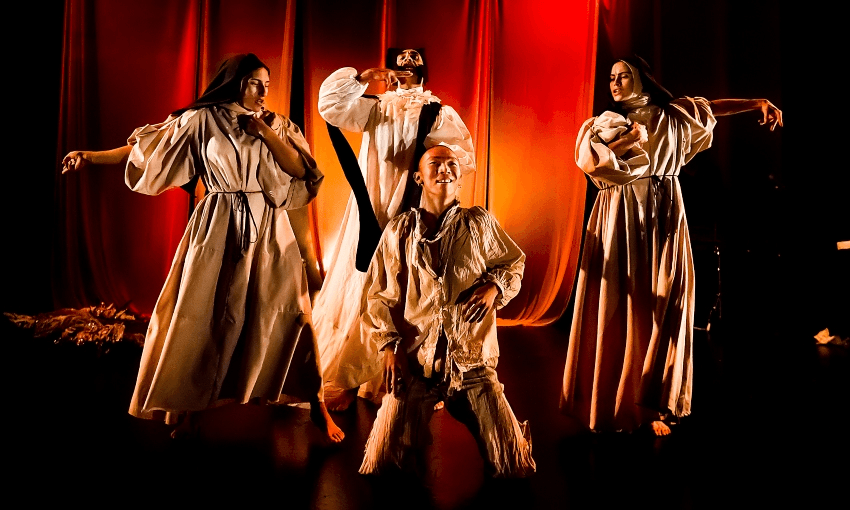 An image from the New Zealand production of Strasbourg 1518 at the NZ International Arts Festival (Philip Merry, Supplied by Borderline Arts Ensemble)

An image from the New Zealand production of Strasbourg 1518 at the NZ International Arts Festival (Philip Merry, Supplied by Borderline Arts Ensemble)

The dancing plague of Strasbourg in 1518 is fertile artistic ground to explore – so much so that two identically titled productions have been released in the same year. Alex Braae reports on why that has left a New Zealand artistic company feeling aggrieved.

Then Covid-19 hit, cancelling part of their season. The pandemic forced lockdowns all over the world, and in the UK one artistic response was the BBC Culture in Quarantine programme, launched in late March. One of the highest profile events in that series so far is a short dance film with exactly the same name. It was a co-production between Artangel and theatre company Sadler’s Wells, and involved internationally acclaimed director Jonathan Glazer. All are significant and highly respected players in the international performing arts world.

The makers of the New Zealand show aren’t alleging that the title was deliberately stolen, nor are they saying that their work has been plagiarised. The medium and treatment of both productions is clearly different. But the existence of such a high profile piece with the same name has shattered their hopes of touring in Europe, and dwarfed any momentum the NZ production had built up.

And Lucy-Margaux Marinkovich, co-director of Borderline, says it shows a serious failure of due diligence on the part of the UK production. “We’re not in any way saying that we claim authorship over this event, and nobody else is allowed to make a work of art about the dancing plague. But it’s incredibly arrogant to use the title of a work which has really only recently been premiered. And the New Zealand Festival really isn’t nothing in the landscape of the international arts scene.”

Marinkovich and co-director Lucien Johnson said they put a significant amount of research into their own production, including intensive study of the event itself. “We read medical essays, we were reading PhD dissertations, we were trying to track down everything we could find,” said Johnson. He suggested the research undertaken by the UK production seemed to have been relatively light by comparison.

The dancing plague of 1518 is a historical event in which hundreds of people danced uncontrollably, often reportedly to their deaths, in the city of Strasbourg, located in modern day France on the border with Germany. It is not known why people started dancing, but the event has provided fodder for historical speculation ever since. While food poisoning and mass hysteria are most commonly put forward as possible reasons for the outbreak, Borderline pulled out themes around inequality, misogyny and the effects of climactic change from their research into the event.

Borderline has had some contact with the producers of the UK show since it emerged, and say they have put their concerns directly to them. They say the responses have been “condescending and upsetting”.

“We’re from the antipodes, sure, but that doesn’t mean we’re unconnected in this incredible age of information,” said Marinkovich.

The Spinoff has seen responses to emails sent by Borderline to the BBC. In one of them, BBC head of business and legal Geraldine Atlee categorically refuted that the title of the work had been stolen, that the title research had been insufficient, or that there were any relevant issues under UK law to be considered.

“As a requirement of the BBC financing the production, the Producers of this short film, Academy Films, undertook all necessary title search enquiries through appropriate legal channels (rather than relying upon a ‘simple Google search’),” said Attlee. “Unsurprisingly, the historical event has inspired numerous works in music and online, but our searches did not reveal any other mainstream works (ie film or TV) which were using the title.”

In a follow up statement, a BBC spokesperson said “all due diligence has been undertaken by producers, Academy Films in respect of Strasbourg 1518, its title and its content, and we reject any claims to the contrary.

“The well documented historical events that took place in Strasbourg 500 years ago have inspired creative responses across a variety of art forms; this film takes its place among them and we are proud to be part of it.”

A spokesperson for Artangel and Sadler’s Wells released a statement saying “as members of the global arts community, Sadler’s Wells and Artangel are saddened that this experience has been upsetting for Borderline Arts Ensemble.”

“We are proud of the film that we have co-commissioned with our partners and, now that we are aware of Borderline’s performance, firmly believe that there is room for both in the world. To that end, Sadler’s Wells has opened a conversation with Borderline to explore how two very different works of art, drawing inspiration from the same history, can complement each other and thrive.”

While Borderline plan to continue performing the work in New Zealand if the opportunity arises again, their plans to take the critically acclaimed show to Europe in the future are now in doubt. “A festival is probably not going to book this show, because if you were an audience member and Googled it, you’d find this kind of throwaway 10 minute dance film,” said Johnson. Search engine optimisation is a significant concern, with the UK production getting rave reviews in global publications like the Guardian.

“So really it does affect us professionally I think in quite a big way, in that it’s hard for us to envision that future we hoped for previously,” Johnson said. Marinkovich added that they were under no illusions about the difficulties New Zealand performing artists already face in getting their work seen overseas. “We just feel really crushed, and completely belittled by this,” she said.

The trailer for the NZ Strasbourg 1518 production

Regardless, they are hopeful that there will still be room in the world for their work too, and Johnson believed the art they made had not been diminished as a result.

Marinkovich said while the experience was disheartening, she also thought the themes that underpinned Borderline’s production would continue to be relevant, particularly with the show dealing with questions of upheaval and social unrest. “We’ve been developing our work since before there was any mention of Covid-19, and while we were making it, it felt incredibly relevant and pertinent throughout the creative process. We’ve been experiencing those things over and over again.”