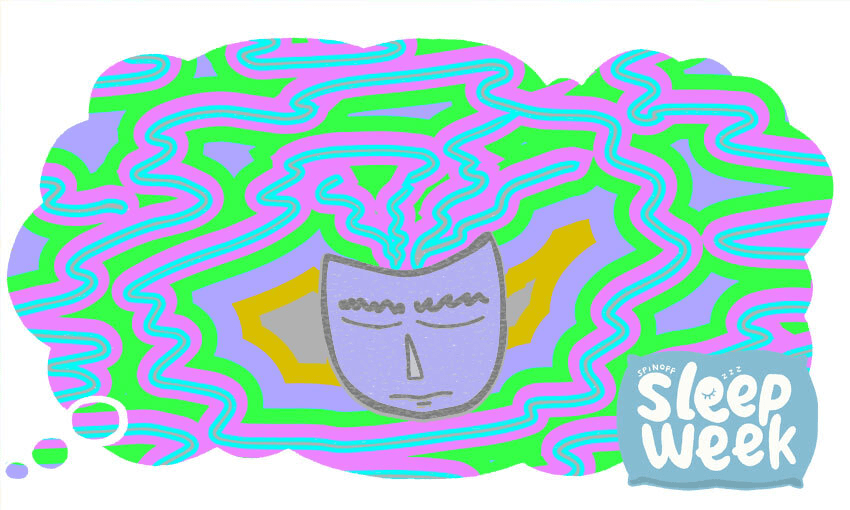 An amateur guide to lucid dreaming

Sleep Week: Ever wanted to take control of your own dreams? Lucid dream enthusiast Don Rowe teaches you how.

For Sleep Week (not strictly a week), The Spinoff is tossing and turning through a range of perspectives on sleep – read more Sleep Week content here.

A few nights ago I took a flight from London to Istanbul via 16th century Prague. It was a short visit – the golems were acting up, those beasts of magic and clay – but it felt good to travel again. Then I woke up to another sleety Wellington day.

Actually, there was more to it than that, but nobody wants to hear about someone else’s dreams. Most of the time that’s fair enough. “Oh it was like I was at school? But the classroom was my childhood house? But it also wasn’t?” Fascinating.

But, on occasion, my dreams are much more. Some nights they are ecstatic whirlwinds of colours beyond description, a total disregard for temporal and physical laws, creations of pure id, like a hyper-realistic Minecraft. And yours can be too.

Lucid dreaming is the act of conscious awareness during the dream state. You’ve probably done it before, climbing back into bed after a midnight pee only to find yourself with nine fingers on one hand, or observing the clocks running backwards. It’s that feeling of, “holy shit, I’m dreaming!” which almost inevitably slips away. In these days of prohibition, it’s probably the closest you’ll get to a trip without licking Joe Rogan’s bald-ass head.

While on the surface it sounds like some certified “reality-shifting” Tik-Tok bullshit, lucid dreaming has been practised for thousands of years by everyone from Aristotle to esoteric Buddhist sects in the mountains of Tibet. The monks believe that all of reality is an illusory dream, and that passing into a dream state is simply exchanging one dream for another. But in learning to “stabilise” the lucid dream, which is a notoriously slippery practice, we can cultivate greater mindfulness. We spend a quarter to one half of our lives asleep, after all, and that’s a long period to be mindless.

“Whatever,” you might be thinking, “Pull the other one.” But, like mindfulness meditation, the practice of lucid dreaming is increasingly a subject of scientific interest.

Earlier this year, researchers successfully communicated with sleepers in a state of lucid dreaming for the first time. The subjects were asked mathematical and other novel questions and responded using eye movement. Around 60% of questions received no answer at all, but those who did respond had an accuracy of almost 20%. Cognitive neuroscientist Benjamin Baird told Science magazine it was a “proof of concept”, strengthened by repeated success across multiple laboratories.

Psychoanalysts are no strangers to the dream state, either. Freud famously called dream analysis the “royal road to the unconscious”. Through lucid dreaming, the theory goes, we can walk that road ourselves, interacting with our own subconscious in a state of limitlessness.

It’s also just really, really fun. But how do you do it?

For most of us, trying to remember a dream is like holding water in cupped hands. No matter how hard you try, the majority of dreams spill back into the psychic deep almost immediately upon waking. This is a problem for two reasons: in order to lucid dream, you have to realise you’re dreaming, and once you’ve had a lucid dream, you need to be able to remember it when you wake up.

The trick is to record whatever fragments of dream-stuff you can recall, as soon as possible. You could wake up the person next to you and give them a full technicolour breakdown, but you’ll ultimately gain a lucid dream and lose a spouse.

The best practice is to keep a dream journal by the bed and spend a minute or two writing down everything you remember, every time you wake up. It doesn’t have to be a play-by-play, even small scraps or moods or feelings from the dream is enough. Like any other skill, your recall will get better over time.

For most people, the waking world is generally stable. You can read this article, put your phone back in your pocket, and when you come back to it tomorrow, it will be roughly the same as yesterday. That’s because beyond the assumptions and opinions we project onto the world, it remains external. Not so with the dream world.

Inside your own head, there are no external laws. Cats can speak, pigs can fly, you can fight off a mob of goons while playing the flute (I did once, anyway). Instigating a lucid dream is often a matter of spotting these logical inconsistencies within a dream and drawing the right inference from them eg “how could I be breastfeeding, I’m a 33-year-old man – oh wait”.

Hardcore oneironauts recommend waking “reality checks” – looking at the clock twice, counting your fingers – in the hopes that habit will carry over into a dream, where the three thumbs on your left hand might clue you in. But if you don’t want to routinely question reality all day, it was enough for me to just practise mindfulness (you’ve been saying you would since lockdown, anyway).

For my money, staying mindful as you enter hypnagogia – the state just before sleep – is the most effective method of inducing a lucid dream.

For most people, accidental lucid dreams happen after an interruption in sleep, whether that is someone else’s alarm, going to the bathroom, or your flatmates… coming home late at night.

With competent enough dream recall, and the ability to stay at least somewhat mindful of the boundary between waking and sleep, simply setting an alarm before you need to get up can be enough to get things rocking. Aim for around four hours after you expect to fall asleep, wake up, set your intention to lucid dream, and go back to bed.

You want to come out of sleep into a state of semi-awareness, before consciously following your brain back down the rabbit hole. I personally have found it helpful to literally imagine myself going “down” into the dream, but with practice you will find what is most effective for you.

After that, what you get up to is your own business – nobody is watching but you.