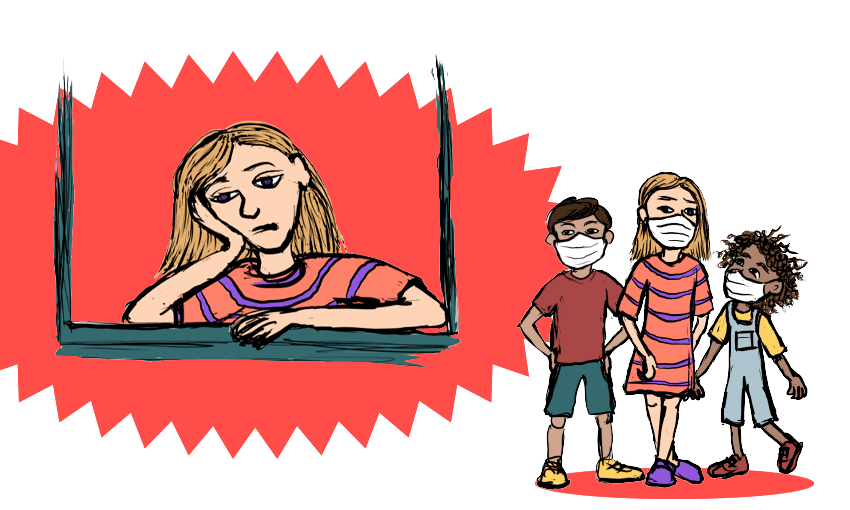 Are we being inclusive enough of children in our pandemic response?

Children make up 20% of the population but close to 0% of Covid-19 messaging. That’s not good enough, says a researcher who has been talking to kids about the pandemic.

Eleven-year-old Lachlan MacDonald pays attention to daily Covid-19 case numbers. He sometimes overhears the number when his parents are watching the news, but often he sees it in the news headlines on his browser homepage. He worries about that number, because he thinks it determines what alert level Auckland will be in next. If it’s over 100, then he thinks alert level three, but at 130 cases, he thinks, that means we’ll be in level four. It’s the uncertainty about his future that worries him – will he be too behind in school to progress to intermediate? And he worries that he might get infected.

There are 1.1 million children and young people in New Zealand, representing 20% of the “team of five million”. These young people like Lachlan have been critical players in our collective Covid-19 response. Kids have enacted social distancing, worn masks, washed hands and told adults about their symptoms so they can get tested. We rely on children to keep us safe, just as they rely on us. But this 20% of the team have also rarely been included in our public health messaging, and certainly not lately. The prime minister’s press conference for children made global headlines, but that was one and a half years ago. Eighteen months is a quarter of a lifetime for Alex Williams of Wellington, who turned six two weeks ago, and who told me: “One problem is that [the pandemic is] getting quite hard because I’m almost seven. It feels like it’s been around forever.”

Amid the talk of 90% vaccination targets, children have been further erased – part of the team, but not part of the target. Official messaging shared by the deputy prime minister didn’t even have the word “eligible” in fine print. In a few months, children aged 5-11 will be centre stage in the vaccination effort, but for those under 12, being vulnerable in the midst of community spread is not a choice. Meanwhile, adults talk about children returning to school, but who is talking with children?

As a child health researcher, I know that in order to meet children’s needs, we first have to include them in our conversations, to listen and understand their perspectives. So, as part of community consultation for a forthcoming study with children about the pandemic, I asked a panel of kids about how they’re accessing and interpreting Covid-19 information. Lachlan pointed out that kids can be very isolated at this time. Being home from school and without cellphones means that it’s hard for kids to contact others without going through adult gatekeepers. (The landlines of my childhood are now uncommon in children’s homes). Seven-year-old Lola Huata of Auckland told me she sometimes listens to the prime minister with her mum, but she usually has to get Mum to tell her the rules. And while parents are great at tailoring information to individual children, should they be carrying the burden of public health translation all on their own? How can we be an inclusive society if the only way children are included is through parent knowledge brokers?

Including children’s perspectives is important because without them, our public health interventions aren’t addressing the needs of the full population. When I talked to kids, I learned about the issues that were important to them – issues that adults might overlook or underestimate. The forthcoming vaccinations were a big worry for kids, particularly the size of that needle. Lachlan and Alex were very keen to get their vaccination asap, but others, like Lola, were dreading the jab. Children appreciated information about the smaller needle size, and reassurance that the child-size Pfizer doses had orange caps so they wouldn’t accidentally get the adult needle. “And they should have candy or toys for kids after vaccination,” added Lachlan. “Because kids always do stuff for rewards.”

How kids feel about vaccination is important, because kids can and do influence parental decisions. Lola watches her mother closely and reminds her to scan the QR code before she enters a shop. For Lachlan the big issue is testing; when he had a cold recently, he convinced his mother not to take him for a test (“no no please no”) because of the discomfort of that deep swab up his nose. “People don’t really understand that kids are more scared than big people,” he emphasised, suggesting that child case numbers may be underestimated because children afraid of testing may not disclose their symptoms. When I suggested the need for a more kid-friendly test, he agreed. “A very very friendly test” might entice him. By listening to children’s concerns and taking them seriously, we can both provide information that helps children (smaller needles) and adjust our public health approaches to support their involvement, keeping us all safer.

So what do children themselves think about being so left out of our national conversation? Kids I spoke to were pretty unanimous that adults should give kids information rather than try not to worry them. Lola suggested that kids can tell when adults are glossing the truth, and that could make them imagine the situation was worse than it actually was – like when adults say the vaccine doesn’t hurt at all: a clear lie.

Lachlan said the truth may be scary “but it’s worth it”. He was keen for an app or website for kids with Covid-19 updates that explained the case numbers and rules. But some kids were also happy for their parents to be in charge of knowing what needs to be known.

Kids knew the least about the government’s pathway out of lockdown but wanted most to know when the pandemic will end. If the traffic light system is confusing for adults, then for kids, trying to piece together a vision of their future from snippets of news and answers from parents is impossible. Yet children, who have so little power over what happens to them, told me they really need the reassurance of being able to picture their future – whether it’s an image of where they will go to get vaccinated, what school they’ll be at next year, or which friends they’ll be able to see in the summer holidays.

As adults, we get to see our experiences and perspectives and concerns discussed in the public arena, and we get to hear from those who are different from us as well. This is part of how we collectively share and make sense of critical events like the pandemic. We take this ability to place our experiences within the wider world for granted as part of our adult privilege. But there are no news broadcasts or op-eds for kids. We’ve heard plenty of critiques of government measures from adults, but kids like Lachlan don’t have anywhere to express the unfairness of not being allowed in the dairy under level four just because he’s a kid.

But there is another way. Siouxsie Wiles and Toby Morris have shown us how to make public health information accessible to everyone. The next step is to include kids in our public conversations, so we’re hearing and addressing their concerns – not just our concerns about them.