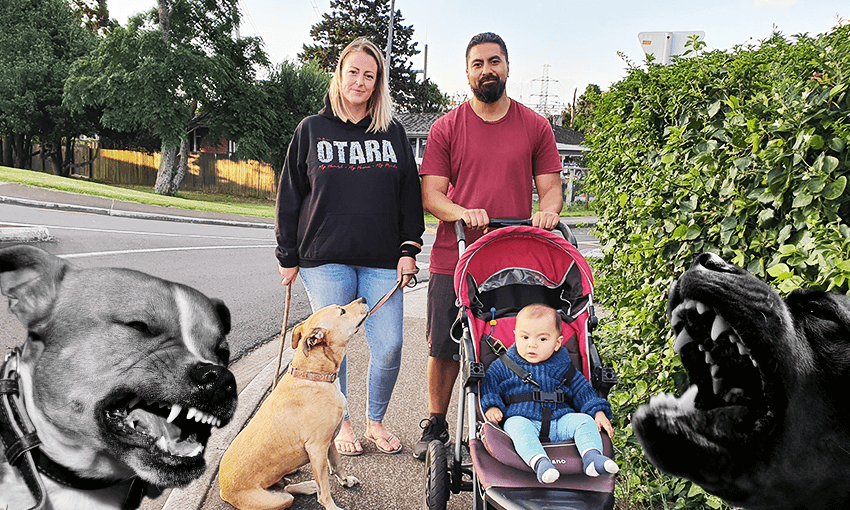 Victoria Hearn with husband Antonio Afamasaga and their son Matai, on a rare walk with their dog. (Photo: Supplied, additional design Archi Banal)

Who let the dogs out: Locals fight back against packs of aggressive canines

Victoria Hearn with husband Antonio Afamasaga and their son Matai, on a rare walk with their dog. (Photo: Supplied, additional design Archi Banal)

A petition is calling for something to be done about packs of dogs harassing people in Ōtara, but local politicians – including a number of mayoral candidates – say the problem runs deeper than just animal management.

It’s a perfect sunny day for a walk when I meet Victoria Hearn and her seven-month-old son in Ōtara. But along with the usual parenting paraphernalia like diaper bags and sipper bottles, Hearn is also carrying a long stick.

The stick, as she explains, is an unfortunate necessity due to the high number of aggressive dogs in the area.

And while she hasn’t been bitten yet, she says it’s been close on occasion and she can no longer take her own dog for a walk, as he has become a prime target for attacks.

“I’ve literally been chased through the streets and sometimes there have been packs of three or four dogs. And it hasn’t just been me, as people are constantly complaining about dogs on the local Facebook pages.”

Hearn has also found it difficult to get Auckland Council’s animal management services to respond quickly to reports of stray or threatening canines in the area.

“The issue I’ve had with the council is that they’ve asked me to contain the dog on my property – but I’m not going to go out and catch them all,” she says.

“They’ve also said to me that they aren’t fining or pursuing people because of Covid – I can understand that, but we have regulations in place for a reason, for the safety of kids, and so our streets and parks can be for everyone.”

Concern over the issue has led Hearn to start a petition, calling Auckland Council to take immediate action before someone is seriously injured.

The petition has reached almost 500 signatures and last week she presented it to the Ōtara-Papatoetoe Local Board.

Ōtara-Papatoetoe Local Board chair Apulu Reece Autagavaia has welcomed Hearn’s presentation on the problem and his board will be looking at how it can support any proactive measures like education for dog owners.

“Firstly, given it’s a regulatory issue, there’s nothing we can do directly, but it is an issue we have raised many times.

“And I think this is an issue a lot of local boards have been raising, and not just around dogs, but also around noise management and consenting.”

Autagavaia says council staff have told his board that budget cuts along with high staff turnover has made it increasingly difficult to enforce council bylaws.

“There definitely seems to be a feeling across Auckland for many local boards that we’re making all these bylaws but there’s no enforcement.

“So while the governing body is trying to cut as much fat as possible out of the budget, we don’t think enforcement is an area where there is fat and we should be adding resources, not cutting.”

In a written response to queries regarding this matter, Elly Waitoa, council’s manager of animal management, said:

“We’re seeing the impact of the omicron outbreak on staffing levels in the council’s animal management team, meaning we currently need to prioritise incidents with potential for higher risk and harm, like dog aggression and attacks and stock on roads, over lower risk incidents like unregistered or roaming dogs.

“Whilst we are not actively attending lower risk incidents at present due staffing levels, owners may still receive an infringement for failing to comply with their obligations under the Dog Control Act 1996.”

But change could be on the horizon, if Auckland’s mayoral candidates are to be believed. Of the four contenders The Spinoff spoke to, all were in favour of improving resourcing to council’s regulatory and compliance services.

Restaurateur and centre-right candidate Leo Molloy says enforcement of bylaws is a “core council business” and “if they [council] neglect those services, they are simply not doing the role they should be doing”.

“There appears to be an element within the council structure at the moment who have more appetite for vanity projects and projects that don’t have a good sound fiscal basis,” he says.

“But when it comes to dog control, graffiti removal and providing good quality services, I’m a fan of that. But I’m not a big fan of the cavalier way Auckland Transport spends money, like on dancing jugglers in Vulcan Lane.”

Communities and Ratepayers’ Viv Beck says “the kind of fat” she would like to cut is around the inefficient way projects are rolled out, while core services need to be funded better.

“I’m aware council has made cuts through Covid, due to loss of income, but what I would say is they need the ability to move resources to core services,” she says.

“If the local boards, who are close to their community, are asking for additional resources, then that needs to be listened to.”

Jake Law is running for mayor as well as the council ward seat of Albany. He says similar issues with compliance and enforcement have been raised with him by local boards on the North Shore, and he believes it’s time for boards to be given more power to decide on how they resource services in their area.

“We have issues like people parking on beaches, noise control issues, or rubbish being dumped where it’s not supposed to, so I would like to see more funding and empowering of local boards to be able to make decisions to affect the areas they represent.”

Manukau ward councillor and centre-left mayoral candidate Fa’anana Efeso Collins shares Law’s concern. He says as Auckland emerges from the pandemic “there needs to be renewed focus on investing in Auckland’s suburbs and restoring regulatory services”.

“It will be a priority of mine to lead a council that is community-orientated, caring and committed to getting things done, and that means not just generically cutting costs.

“So if we aren’t providing basic services or enforcing the bylaws that make this a more liveable city then that’s got to change.”