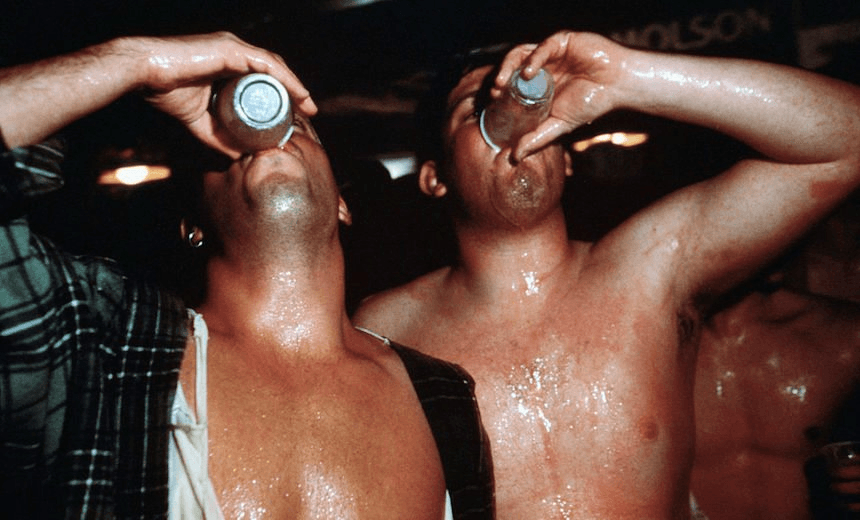 New Zealand’s binge drinking culture is notoriously bad, but could change be on the horizon for this little country of boozers?

Booze, booze, everywhere, but what does it mean to drink? Alcohol consumption around the world is awash with stereotypes. In France, we might imagine, it’s allowing your stylish young child a glass of wine with Maman et Papa at dinner. Whatever Americans drink, it’s exclusively out of red cups. And in Australia, from shoes.

As for New Zealand, I am reminded of a meme I recently came across: “telling your parents you were at a sleepover when you’d really be dying in a field from drinking too much vodka.”

The image of someone lying face-down in the long grass, like an especially distressing Pokémon – as accurate a reflection of my latter years of high school as my NCEA transcript – made me feel first nostalgia, then heartfelt gratitude that those days are behind me.

And maybe the nation, too.

This year’s Global Drug Survey – the world’s largest, of nearly 124,000 people in more than 30 countries – suggests that New Zealanders might be ahead of the curve globally in their desire to cut back on booze. The findings published last week said 37% of respondents who had recently drunk alcohol wished to drink less next year; in New Zealand, it was 42.5%.

Being of self-selecting participants, the survey is not without flaws, but it could indicate a sea change in a country where drinking can be approached with such single-minded gusto, you could be forgiven for thinking that the six o’clock swill never ended.

New Zealand is notorious for its binge-drinking culture, and I was once an enthusiastic participant in it. I remember, or rather don’t, first coming to alcohol by passing a litre bottle of Smirnoff between three and sometimes even two of us, knocking it back neat “in case it wouldn’t work”.

These days, when I drink less than I have ever done in my adult life and it takes a special occasion and two weeks’ notice to get me out past 11pm, I am appalled by the thought. Where had that behaviour been modelled? It’s not like Paris Hilton or Drew Neemia or anyone else on the 2007 A-list had been papped swigging spirits in a sleep-out. Where did we even get the idea?

At university, we continued to drink alcohol of all kinds, regularly and in large quantities. A mee goreng at Satay Kingdom or Satay Village – whichever was your satay province of choice – and a bottle of Fat Bird sav was your standing plan for Thursday night, and sometimes Friday and Saturday as well.

What I wonder now is if drinking to excess is just typical at that stage in life, when it is somewhat socially permissible to be casually irresponsible, intensely social and still learning your limits – or if New Zealand’s culture around alcohol really is measurably worse than that of any other country.

In fact New Zealand respondents to the GDS put the mean number of days they’d been drunk in the past year at 34, only just above the global figure of 33 and well below the country with the most reported drunken days: my new home, the UK, which recorded a mean of 51, just ahead of the US (50), Canda (48) and Australia (47).

So alcohol continues to pose a significant threat to public health around the world. The challenge – as identified by the GDS authors’ exhaustive study of tens of thousands of people, and easily corroborated by anyone who’s walked down Courtenay Place after 10pm – is that people “overwhelmingly” enjoy getting drunk.

The conclusions drawn by the survey founder as a result are more surprising. Professor Adam Winstock suggested that current guidelines for alcohol consumption should be amended to take into account “the pleasure of intoxication”, and give guidance on how to get “a little drunk” – as opposed a lot.

“In the UK, we don’t tend to do moderation, we end up getting drunk as the point of the evening. Until culture changes and we become more European and moderate in our drinking, we might have to bite the bullet and think about how to advise people to get drunk drinking less.” (Here’s a hard-won tip: you don’t need to drink neat spirits for it to “work”!)

But it seems that New Zealanders might be coming to that conclusion of its own accord. The Drug Foundation’s Ross Bell told Stuff that alcohol consumption is tracking down across all ages of the population, an “encouraging trend” in line with reports of Generations Y and Z drinking less than previous generations globally. “We have seen reductions in risky drinking by young people, so it does seem that young people are getting less smashed than they used to.”

Cultural change is slow, and far from uniform (middle-aged men, Bell says, are the exception to that downward trend). But the idea that it might soon be time to call time on the national all-or-nothing mentality towards alcohol will be, for some generations of New Zealanders, a radical one. Maybe passing out in a field won’t always be a rite of passage. It is hard to imagine anyone will miss it.