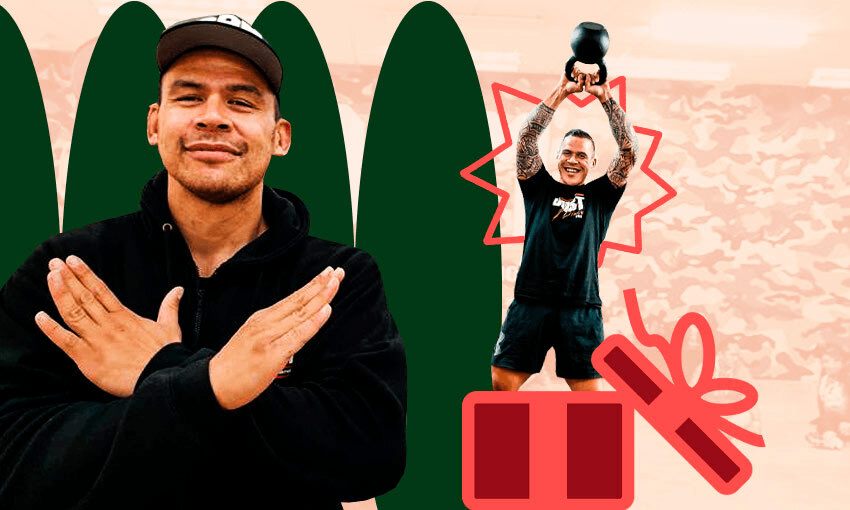 Instead of taking a well-earned break after a busy year running a food bank and fitness organisation, Dave Letele and his team are gearing up to support struggling families over the holidays.

Shortly after my arrival at Dave Letele’s new Buttabean Motivation (BBM) food distribution centre in Wiri, a woman in a hi-vis vest comes into the office with tears running down her face.

Sensing her embarrassment, Letele ushers her quickly through the warehouse, topping up a large box with everyday staples, plus some Christmas-related treats, before sending her on her way with some encouraging words.

But before we can resume our interview, one of Letele’s staff interrupts to say a business just called to offer its services for free, as a token of appreciation for BBM’s ongoing work.

These interactions are just a snapshot of the thousands of people who have been impacted by Letele’s organisation since its inception in 2014, particularly during this latest lockdown when it ramped up its food bank services.

He says the woman is like many he’s seen lately who are struggling but unable to access government support due to being employed.

“If you’ve got a couple of kids and after a few lockdowns, a couple of things go wrong, you’re fucked. But that’s what it’s like for the working poor right now.”

Partway through lockdown, realising the city wasn’t returning to normal any time soon, Letele rented an extra warehouse to run the food bank. He says distributing food was the last thing he expected to be doing when he first started his exercise boot camps eight years ago.

“We opened this because we could see that for anyone who was just keeping their heads above water, lockdown was going to really stuff them – and that’s exactly what’s happened,” he says.

“I never wanted to run a food bank and I’ve tried to keep it on a small scale, but given how many community groups, churches and charities have been relying on us, that’s why we had to come here. I didn’t have any funding, I just did it.”

Another initiative Letele has applied the “just do it” mentality to is connecting his service to the Ministry of Health and a local GP provider.

He says after meeting the team from Total Healthcare, South Auckland’s largest primary healthcare organisation (PHO) with the biggest Pacific patient base, he decided to pitch a unique partnership idea to the ministry, which he just happened to be meeting the next day.

“I said to them, you need clinicians and professionals to wrap around us, rather than having the community coming to you, because it just doesn’t happen like that.”

After their meeting, Letele says the ministry “could see the impact we’ve been having and decided to take a leap of faith”.

And the faith is being backed up with $500,000 worth of funding over the next two years for BBM’s From The Couch programme, where Total Healthcare patients struggling with conditions like type 2 diabetes and obesity will take part in Letele’s 12-week weight-loss programme for free, as well as getting regular mental and physical health monitoring by the PHO’s staff.

Letele says this “game-changing” health initiative won’t just save lives but create a template for others to follow.

“There’s been nothing like this before. Sure, there were programmes like Green Prescription where people were just referred onto another provider, but there’s been nothing that’s integrated, where we’re all working together. Massey University will be evaluating it, looking at what’s working, what’s not working, and so by the end of it we’ll have a product that we can prototype and replicate.”

What will be crucial for patients is being part of the BBM family, he says.

“What’s different about our programme is that it’s totally free and even when they’re finished the programme, they’ll still be in our system, surrounded by a bunch of great people who are all on the same journey but who will be just a little bit ahead of where they are.”

But right now, he’s primarily focused on getting food out to South Auckland’s most needy.

“For the people at the bottom, for those that we help, Christmas is going to be pretty miserable,” he says.

“But we’re going to be hooking up about 250 families with the best Christmas hamper they’ve ever had. The grocery items alone will come to $250. They’re getting 5kg hams, a big pork roast, chickens, mince, the works.”

So how does Letele launch weight-busting initiatives one week, while keeping up with the needs of families on the breadline the next?

“It’s full-on because the people we impact are those who society has forgotten about. But we’re going good. The only thing that really stops us is funding.”

Most of Letele’s workers will take two weeks off after Christmas, whereas Letele and a skeleton staff will take just the 25th off.

“Our team is wrecked so it’s important they get some time off and when they come back, that’s when my wife and I will go away,” he says, adding with an embarrassed laugh, “I haven’t told her yet that we’re working Boxing Day. But what are you going to do?”

Letele is an enormous man by most standards, but it’s his mental strength to keep going that’s most impressive. He says he draws a lot of energy from the work itself.

“I just make sure I train every day. I train with all my mates, we meet up, have a laugh and train – so what’s going to the pub for someone else is training for me. It’s a release and a chance to vent.”

He also took his team to see the Joseph Parker v Derek Chisora fight last weekend. He can’t help reminisce about his own days as a boxer, when he and Parker were both fighting under the Duco Promotions banner.

Letele stares off into the distance, obviously thinking back to a different time, when he was much heavier but also on the cusp of what would be a life-changing path towards getting himself and many others to a healthier place.

“It’s been a cool journey, that’s for sure.”