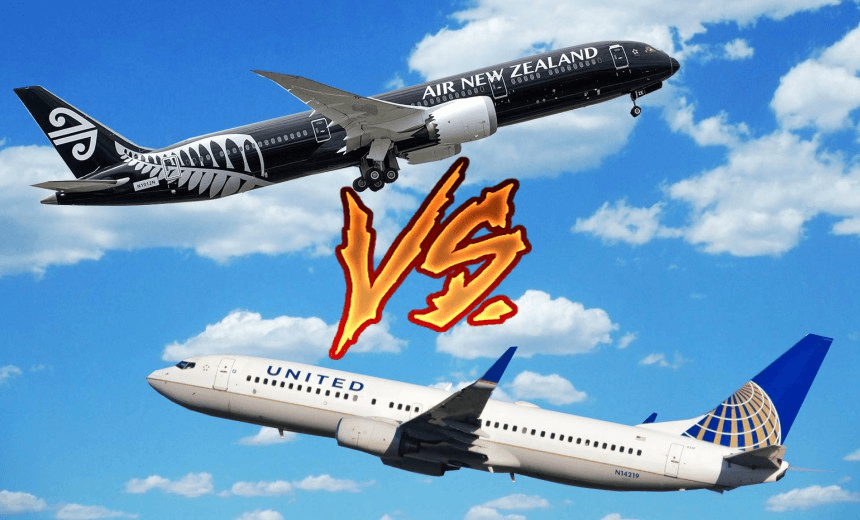 A champion is crowned: Air New Zealand vs United Airlines

Madeleine Chapman flew to Los Angeles on United Airlines and flew back on Air New Zealand. One was better.

You don’t know what you’ve got ‘til it’s gone. Is something that annoying people love to say out of context. But sadly it’s true, and no more so than when a New Zealander finds him or herself on a different, and therefore inferior, airline to Air New Zealand.

I booked my flights to America with all the confidence of a mansplainer, only to show up at the airport to find that my flight booked through Air New Zealand was in fact a United Airlines flight. Not their fault (United is a partner airline) but still I felt betrayed. Maybe they’d overheard me saying their Rhys Darby safety video was terrible.

Thankfully, my flight home three weeks later was with the real Air New Zealand and my god, what a difference it made. On both flights I was sitting four rows from the back of the plane because I booked my tickets very late (bonus tip: don’t do that, it’s expensive) so in that sense, it was a very similar experience. Except in all the ways it wasn’t.

Air NZ: Window seat, great. Man sitting in front who, five minutes into the 12 hour flight, very politely asked if I had long legs. I said I didn’t, so he reclined his seat all the way back and kept it there until we landed, terrible.

Verdict: Different but equal horrors. Both out of an airline’s control but I like to complain.

Air NZ: Do remember it.

Verdict: Sometimes ignorance is bliss. One point for United.

United: Had what sounded like nice options for dinner and breakfast but by the time the cart got back to our row, we just got whatever was left. Ordering food to your seat wasn’t an option.

Air NZ: I feared the worst after the United flight but managed to get my first choice for both. Ordering wine refills to your seat is also a fun perk that can get out of hand very quickly. I noticed the international cheese and crackers aren’t as good as the domestic cheese and crackers, though. I always remember Air NZ meals being incredibly good for plane food but I think it’s gone down in quality the past few years. It’s still better than most other airlines, just not as good as it used to be.

Verdict: Air NZ wins purely for having enough food and drink on the flight.

United: Didn’t know they made screens smaller than the ones on New Zealand planes but apparently they do because they were all over United. Hard to complain about not enough entertainment, but I’ll try. There didn’t seem to be many options.

Air NZ: Almost every Oscar contender from this year was available to view on a slightly bigger screen on the Air NZ flight. And there’s a remote so you don’t annoy the person in front of you (who’s kindly reclined all the way back) with your heavy-handed tapping.

United: Global controversy aside (my flight was two days before that happened), the United flight crew most definitely hated their job. They were telling off so many people who desperately needed the bathroom during the eight hours of heavy turbulence. Understandable, given how easy it would’ve been to fall and how much Americans love to sue their airlines.

Air NZ: There’s nothing like the almost comical New Zealand accent to welcome you on your journey home. After my United flight over, I was acutely aware of how the flight crew treated the passengers and I wasn’t disappointed. They almost acted as if they… didn’t mind doing their job. It was lovely. Bonus points for not injuring anyone or calling security to escort passengers from the plane etc etc.

Verdict: Air NZ hands down, and tray tables up.

United: There was major turbulence the entire flight. Maybe the worst turbulence I’ve experienced outside of landing at Wellington airport. While overseas I stayed with a pilot and he said that regardless of the weather, it shouldn’t have been that bumpy.

Air NZ: Not a bump all flight.

Verdict: Nobody can control the weather but Air NZ still wins.

United: “We’re on our way to America and here’s a cup of coffee while you wait.”

Air NZ: “YOU’RE GOING TO NEW ZEALAND WOW AMAZING HERE’S SOME SOFT PURPLE MOOD LIGHTING HAVE A DRINK AND A PILLOW AND HERE’S ANOTHER DRINK AND DID YOU LOVE OUR SAFETY VIDEO WE’VE HEARD IT A THOUSAND TIMES BUT WE STILL LOVE IT HERE’S A LOLLY FOR OUR DESCENT LOOK WE’VE ARRIVED NOW KIA ORA THANK YOU FOR FLYING AIR NEW ZEALAND KA KITE ANO”

Good or bad? United was bad but no more bad than every other American airline. Air New Zealand is still very good, probably the best.