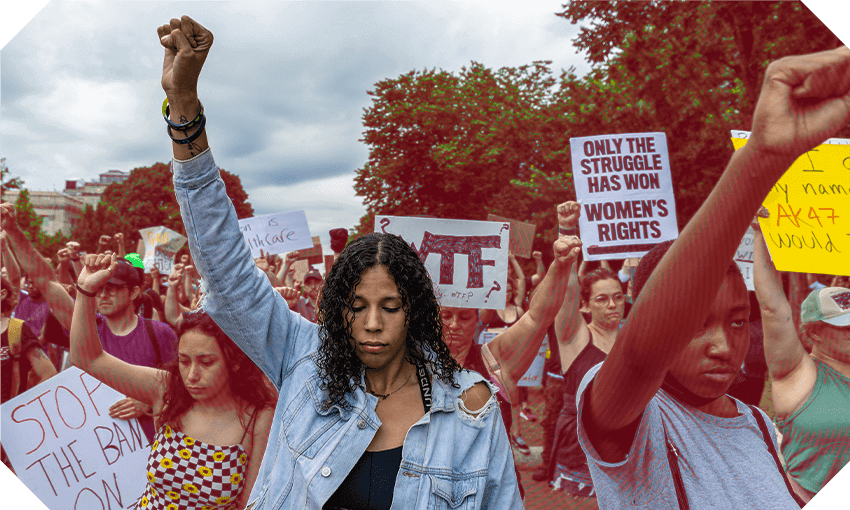 Furious about the state of reproductive rights in the US but don’t know quite what to do about it? We’ve got some ideas.

After 50 years, the US Supreme Court has overturned the 1973 Roe v Wade ruling, which guaranteed the constitutional right to an abortion during the first two trimesters of pregnancy. It is a decision that is expected to see abortion banned in roughly half US states and impact millions who will continue to seek abortion care, with research plainly stating that women, particularly women of colour, will die as a direct result of this decision.

“Watching the removal of a woman’s fundamental right to make decisions over their own body is incredibly upsetting,” NZ prime minister Jacinda Ardern said of the decision. “To see that principle now lost in the United States feels like a loss for women everywhere.” Although it is happening thousands of kilometres away, you might still be feeling angry, hurt, confused and scared about what this means for reproductive rights across the world.

If you want to channel those feelings, here are some options for you.

If you can spare any extra cash, there are plenty of US organisations that could use your financial help. Consider Planned Parenthood, the US equivalent of our Family Planning, which provides healthcare and education about all things reproductive rights in over 50 locations. Consider Sister Song, the largest multi-ethnic reproductive justice collective in the US, with a focus on the southern states where abortion is particularly threatened. Indigenous Women Rising is committed to honouring native and Indigenous people’s inherent right to equitable and culturally safe health options, including abortion. Brigid Alliance helps to assist people with transportation when accessing abortion care.

Or, if it is too overwhelming to choose, this National Network of Abortion Fund will automatically split your donation between over 90 organisations in the US.

Unfortunately this is yet another opportunity to revisit The Handmaid’s Tale by Margaret Atwood, the dystopian nightmare that Atwood herself has said over the weekend is now very much real. Read the abortion chapter in Zami: A New Spelling of My Name by Audre Lorde, and Loop Tracks by Sue Orr – especially the first section. Relive the heroic local stories of abortion care from 1900-1939 in Risking Their Lives by Dame Margaret Sparrow.

For more immediate responses to Roe v Wade, read this New Yorker dispatch from one of America’s largest abortion clinics in Houston on the day the Supreme Court ended the constitutional right to abortion. Read this piece from The Atlantic about lessons for the US from Northern Ireland. This from the New York Times looks at the right to privacy in the era of mass surveillance, specifically around reproductive rights.

But wait, there’s more. Read this piece by abortion rights activist Joyce Arthur about when the anti-choice have to choose, and this reflection piece on Toni Morrison’s Beloved. Read Catherine Robertson’s Nine Lives essay honouring the work of Dame Margaret Sparrow. Read this interesting piece about how television lied to us about abortion, and this fascinating reflection on not having an abortion at all.

Because sometimes you just have to watch Olivia Rodrigo and Lily Allen singing ‘Fuck You’ with a crowd of 200,000 to remember that you are not the only one who feels like they are going crazy. Or you could watch this acceptance speech. Or you can watch Reversing Roe (2018) on Netflix, the director of which warned over the weekend that this overruling was “just the beginning” for the Supreme Court.

Closer to home, Backroom Troubles (1997) features New Zealand women who grew up in the 1940s, 50s and 60s talking about the stigma and the trauma of an era when abortion care was inaccessible. More recently, The Spinoff’s own feminist webseries On the Rag did a whole episode about the state of abortion in Aotearoa.

It’s perfectly OK to be sitting in this and feeling angry, shocked and helpless. It’s hard to reconcile the US that gave us a solid chunk of second wave feminism and many of the heroes and texts cited above with the US that’s just joined a diminishing group of countries rolling back reproductive rights. If the doom-scrolling gets too much, enact the ye olde slogan “Think globally, act locally” and do something for you, someone else, or the wider community: