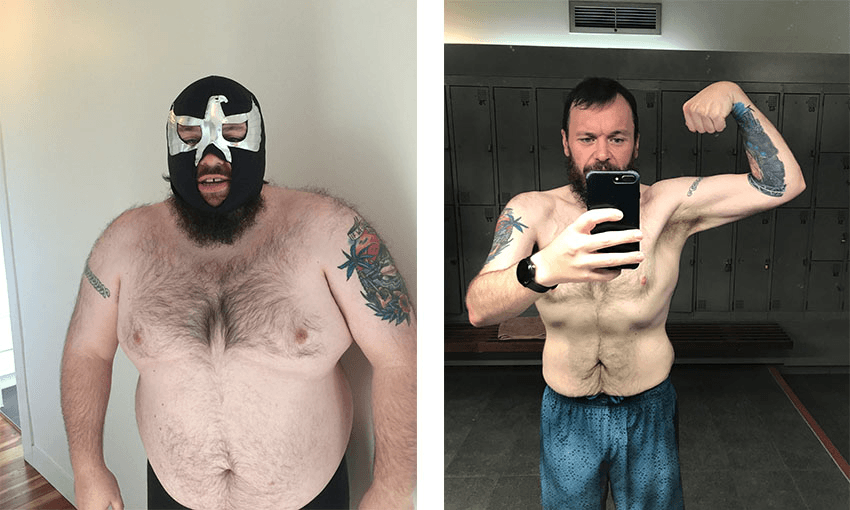 Five hundred or so days after a grossly unfit 42-year-old man weighing nearly 144kgs decided he wanted to become a pro-wrestler the moment of truth has finally arrived in part three of Mike Kilpatrick’s journey. Read part one here, and part two here.

No longer will I be able to hide behind self-deprecatory social-media posts, writing about all I’ve done to put myself in the best possible position to succeed and referring to myself in the third-person. It’s time to put up or shut up.

To be fair, I knew it was coming – Impact Pro Wrestling (IPW) trials are always around the same time each year – but still I wasn’t mentally prepared for confirmation popping up on my Facebook timeline. Saturday 2nd February 2019. At that moment it was more real than anything I’ve ever experienced. And given my overactive brain it set off a chain of events that ended up with me in a hot shower, doubled over and telling myself to stop being so bloody stupid and give it all up.

It took a few days to get to the full ‘imposter syndrome’ meltdown, though. The doubt started with a simple question, ‘how ready am I?’. The answer, predictably, was ’not nearly ready enough’.

Logic and reason started flying away from me quicker than chips and chocolate used to fly into me. Yes, I’d lost 63kg. Yes, my eating is under control. I’d just run three 5km runs in short succession for the first time ever. I’d even stumped up for a personal trainer – who happens to be both a wrestler and someone with significant power at IPW at that – yet I couldn’t shake the idea that I wasn’t worthy of any of it.

The middle-class privilege and sheer bloody-mindedness that got me where I am now became a millstone around my neck. The five IPW training sessions I won at an auction to help send Duchenne Muscular Dystrophy sufferer Mitchel Fels to WrestleMania went from being a fantastic idea to an attempt to jump the queue. I hadn’t hired a personal trainer, I was trying to bribe my way in.

And then I went further back, to the start of my journey. Liberal guilt piled on. Without a decent job with a good wage I wouldn’t have been in a position to buy the running shoes I needed. Without worrying where my next meal was coming from I could concentrate on my weight-loss and the bigger picture. I could even afford the whole new wardrobes I needed to buy as old clothes started to drown me. And then, on that morning, it became the perfect storm, my grand plan crashing around me as the water cascaded.

YOU’RE A FRAUD. GIVE IT UP. YOU DON’T DESERVE ANY OF THIS.

Two things kept me sane that day and helped turn things around – my partner Sam and a training session I had with Caleb, my trainer, that afternoon. When I told her of my doubts she gave me a knowing glance. “You’ve come too far for that,” she said. “You’ve got this.” My breathing normalised. She’s been way more successful in her field than I can ever hope to be and so when she speaks it has authority. She also knows me well enough to know the difference between when I need a cuddle or a few word to wise up.

And then came the wrestling drills. With every side-step between cones, every push up, every single one of the 100 squats a little belief came back to me. The customary fist-bump after 30 very hard minutes sealed the deal. I was back on track.

How ready am I now? As ready as I can possibly be. And after the worst shower of my life you’d better believe that’s a win. It’s not a guarantee, of course, but when are there any guarantees in life?

But I’ve got some confidence back and you’d better believe I’m going to give this everything I’ve got. My fitness might not be where it needs to be but there’ll be no doubting my heart. And how do I know this?

Out on a morning walk earlier this week, listening to a wrestling podcast, I caught a glimpse of myself reflected in a window. I had a snarl on my face and I was walking like Irn Bruce, the wrestler I aim to be. I snapped out of it.

Minutes later I was the bad guy from the Scottish highlands again, telling my story to the footpath and any random passerby who happened within a couple of feet. (It’s probably a good time to apologise to the man at the bus-stop on Sandringham Road that morning – wtching a snarling guy smacking his head with the palm of his hand as he talks about the voices from his past that drives his anger probably isn’t something he normally sees as he heads off to work.)

Despite the muddled thinking of the last few weeks I do have some clarity.

My desire to become Irn Bruce, to walk through that curtain and put on a show in front of a crowd isn’t driven by Machiavellian desires. It came about because I love what IPW does and especially the people who are there. Wrestlers like Jake Shehaan, Humble Will Stone, Candy Lee and The Princess of Ponsonby Ashlee Spencer, to name but a few, have encouraged me every step of the way.

One thing is for sure, though. Come 2pm on Saturday 2nd February I’m going to know whether the pro-wrestling dream of a moderately fit 44-year-old man weighing just over 80kgs continues or I walk away, disappointed but better off for the whole experience. You’ll be among the first to know!