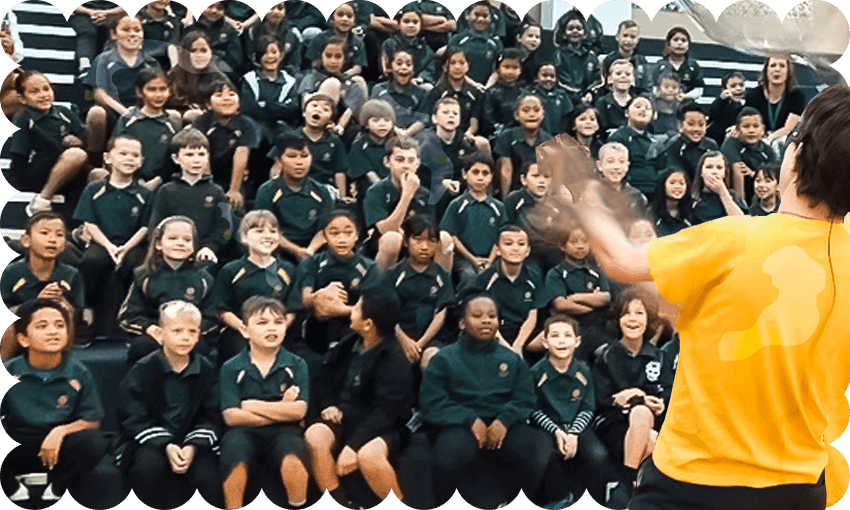 After two years of restrictions, schools and educators are looking forward to getting back to some normality. (Photo: Supplied, additional design Tina Tiller)

Make learning fun again: Educators look forward to getting out of the classroom

After two years of restrictions, schools and educators are looking forward to getting back to some normality. (Photo: Supplied, additional design Tina Tiller)

After two years of lockdowns and restricted group sizes, schools say it’s vital for children that learning is again made interactive and exciting.

“It was about March 16, 2020 and we were at a school in Bluff when we could see things were about to change dramatically,” says Alan.

“We cancelled our tour and drove back to Auckland in three days – and things did change dramatically.”

“In the beginning we really lost the plot because for people like us, when you’re faced with something like a pandemic and the potential of losing your job, there’s also a sense of loss of identity,” says Emily.

Prior to Covid, the Wormans were doing four Science in a Van shows a week at schools and early childhood centres, which meant touring the country for months at a time. But with the lockdowns and restrictions on gathering sizes, they have pivoted to providing more of their services online.

“People say, ‘oh you, should do YouTube’, and we have but it doesn’t make the same impact and I’m not blaming anyone – it’s just a hard situation.”

While the Wormans fully support the government’s health measures, and applaud schools for how they’ve managed through the last two years, they know more in-person learning will make a big difference.

“When we do our shows, there’s lots of interaction, live demos, and the thing we have to remember is that we’re humans and we like to be around each other,” says Alan.

Community Waitakere is another group that goes into schools to provide in-class interactive programmes. The community development organisation runs a programme, with support from Rivercare, called Wild About Te Atatū, which is all about teaching west Auckland children how they can restore the natural world around them.

Community Waitakere executive officer Mark Allen says not being able to run in-person workshops in the parks and streams has meant students are less engaged with the ecological challenges facing their area.

“We need the young people in particular to see what an amazing treasure they’ve got [in the environment] and we’re looking forward to getting back with them to restore it and care for it,” he says.

“So we’ve definitely seen that by not being able to deliver in-person programmes it has made it hard to interact with the community.”

But with the imminent lifting of restrictions, schools are looking forward to having groups like Science in a Van and Community Waitakere back, given the impact online learning has had on students.

“The restrictions have affected everyone, from those in their early years who have had a stilted introduction to learning, to some seniors who have gone backwards because lockdown didn’t suit them or the family situation made it too hard.”

Cheeseman says that’s why groups like Science in a Van are so vital to the overall education experience a child gets.

“Kids are so much more engaged when it’s person to person, and so when we have groups like Science in a Van come in and get the kids involved with their stuff, the kids are far more engaged and as a result they are more engaged in the subject.”

Māngere Central principal Jacqualene Maindonald has also noted the impact of the lockdown and says once a shift to the orange light setting is announced, she’s keen to welcome back more external education providers as well as encourage class trips and inter-school events.

“After two years of on-and-off-again schooling, it’s clearly had a huge effect. We’re doing our assessments at the moment and the staff are noticing that they are quite low, but at the same time we’re also allowing students the opportunity to settle back into a routine and into doing a lot of those core skills, like reading books, which they may not have done much during the lockdown.”

Maindonald says providing external learning opportunities makes education more memorable for pupils and it’s something the school hopes to return to, as long as it’s safe and in line with the government’s guidelines.

“External providers inspire and motivate our kids and so we will be looking to open up the school again, as well as getting back to doing things like class trips and mixing with other schools for sport as well.”

For the Wormans, a move to orange means they can hopefully get back to doing what they love – which is kick-starting children’s interest in science.

“We really love our audience and there’s something special about connecting with people, and so the last thing we’d want to do is make them sick. And given these Covid times, thank god we did have that online option,” says Emily.

“But in-person learning is so much better.”