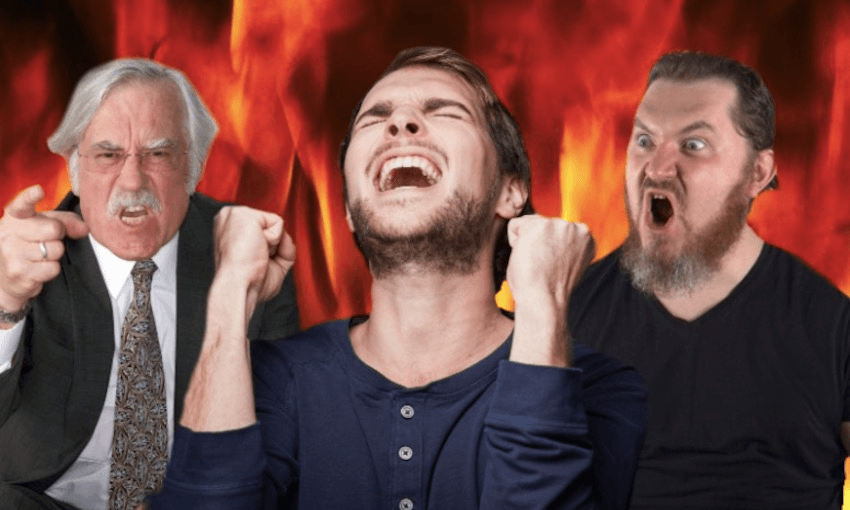 Why are white men so angry?

Paula Simpson dissects why the most privileged group in our society also appears to be the angriest.

In the wake of the Christchurch shootings, social media is awash with articles. And in the comments under each article there are incredibly angry people. And they seem to mostly be white men.

Before the hate starts: no, not all white men. There are also women and people of colour that hate others for no good reason too. But when you look under articles about immigrants, Muslims or anything vaguely feminist, what do you see? In a article I wrote following the shootings, the vast majority of abuse I faced was from white men. Why is this OK?

Recently a study showed that young, well-educated women are more accepting of Muslims than others. In general, it’s women and people of colour that do the heavy lifting in terms of advancing an agenda of fairness and equality. Is there a reason for this?

Is it because historically, women being discriminated against has made them more empathetic towards other victimised groups? And that white privilege (where people with white skin get benefits they didn’t ask for or expect but get, nonetheless), has meant that people of colour see needless hate for what it is, and will do their bit to help?

More than half of all mass shootings in the US are carried out by white men. Not all white men grab guns and kill people (thank goodness), but many men seem to relate to that anger. While they don’t associate with those extremist groups, that same sentiment underpinning those beliefs are there.

Even the phrase, ‘angry white men’ sparks anger. Doesn’t it suck when all white men get lumped in together like that? Like ‘immigrants’ and ‘Asians’ are (side note: ‘Asia’ includes Turkey and Russia, India and the Maldives. So, when you’re calling someone ‘Asian’ you probably should narrow that down a bit).

So, white guys, what are you so angry about?

It looks like you’re angry about immigrants. When the marchers in Charlottesville stormed through the city chanting ‘you will not replace us’, protesting against immigrants, they felt like jobs were being taken from them. That these infidels were tainting their culture, taking away from their very foundations. That these immigrants weren’t assimilating.

I can see you’re angry about those hiring quotas that ‘disadvantage men’, giving preference to women and minorities.

I hear that you’re angry that we look back on history, telling you everything that you did was wrong, punishing you for the sins of your forefathers – while at the same time, amplifying the achievements of women and people of colour, seemingly minimising your contributions. While all you see is that you ran the world for hundreds of years and did a great job.

But now, you don’t know what you can say or do anymore. Nothing you do is right. You’re called racist, sexist, homophobic and xenophobic. You’re being forced into ‘politically correct bullshit’.

And it feels like all of this has boiled together to create a toxic resentment and victimhood. That white men are hard done by. You’ve got it harder than everyone else. You’re scared your children’s lives will be worse than yours, scared that racial and ethnic diversity will push you aside, scared of the changes that are happening. You’re scared that the government no longer cares about you and that you’re lost, losing, no longer needed or wanted.

White men have historically enjoyed every advantage, been given every privilege, and have had everything their way. There are more men called ‘John’ who are on Boards of Directors in NZ than women. Every Kiwi company board is still disproportionately white and male. Men have complete control over their bodies, and we debate if women are ‘allowed’ abortions.

But you haven’t felt privileged.

You’ve still had to work hard; you’ve still had setbacks and challenges. But know that everyone has times in their lives that are terrible, privilege doesn’t mean you get a free ride. It means that you don’t have to fight a system that routinely makes you less valuable than others due to something beyond your control (like gender or skin colour).

And maybe, as a result of this feeling that you’ve never had this privilege in the first place, you see yourselves as being targeted, your rights stripped, your freedoms taken away. And, if that were true, you would be justifiably angry. I know how hard this is to hear but, guys, you’re not losing anything. You’re just gaining equality.

Division results in everyone losing

While we must shut down the hate and victim rhetoric, we have to first deal with the division that has come up between us. Men get more disenchanted, further polarised. Women and minorities continue to encourage togetherness and breaking down barriers, while white men are forced deeper into the corner they feel they’ve been painted into.

This means we need a truthful balanced discussion about immigration, acknowledging they bring many things into New Zealand and often take the jobs that no Kiwis want. The building industry needs about 20,000 tradespeople to get our housing demands met. In NZ, we simply don’t have the numbers. We need immigrants.

We need to look at NZ culture that’s being ‘undermined’. I’ve noticed many ex-pats and immigrants know far more Te Reo Māori than Pakeha. There’s an eagerness to accept the indigenous culture of NZ and a hunger for equality that can be resisted by others. Not one immigrant I’ve seen comes to NZ and expects Kiwis to change, generally, they move to NZ because they love the lifestyle.

It means we need to have uncomfortable discussions with others, asking them why they think these things, gently presenting facts, finding commonalities. And instead of calling names (I am guilty of this, I have to change too), asking questions. Why do you think that? What did you hear that gave you that impression? Keep asking questions until they are confronted with their misinformation.

There aren’t many people who are genuinely stupid and horrible. And even fewer people believe they are racist, nor do they want to be. If you listen to what they have to say, they’ll probably engage in conversation and listen to you too. We cannot simply dismiss these people and be angry back at them. However, we should not be pandering to their misplaced fears and mollycoddling them either.

To the white guys who have read this far without sending me an angry message:

I get it. It’s not your fault you were born the way you are. And you did not have anything to do with the systems of oppression that exist now. But, you do have huge benefits that have been given to you. That in itself isn’t a problem. It’s only a problem if you don’t use this historical benefit you have to challenge the system. You can use your voice to make a huge positive difference in other people’s lives. Know that the rest of the world isn’t trying to take anything from you, we aren’t punishing you.

We just want equality and respect, regardless of gender, religion and ethnicity.

Is that so difficult?