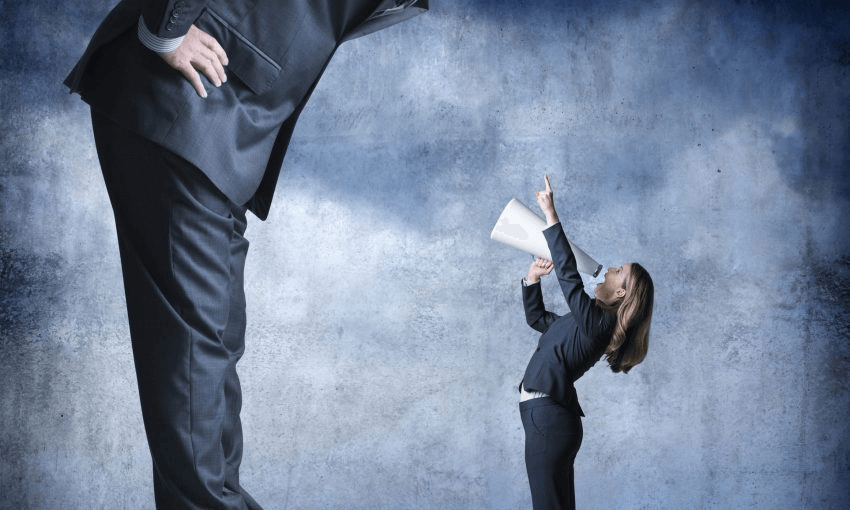 Newsflash: lean-in feminism turns out to be mostly bullshit

New research shows women ask for rises as much as men, but just don’t get them, and it’s an indictment of all that ‘bootstrap’ bluster about equality, writes Madeleine Holden

In an interesting development for anyone with skin in the game, new research shows that female employees ask for raises as often as their male counterparts, but are less likely to receive them. Earlier this week, the authors of the paper “Do Women Ask?” explained their now widely-discussed findings in the Harvard Business Review. Based on data derived from a survey of 4,600 randomly-selected employees across 800 Australian workplaces, they found that women ask for raises just as often as men do, but only obtain them 15% of the time, compared to men’s 20% — a difference that leads to a significant pay disparity over the course of a lifetime. “The bottom line of our study,” they said, “is that women do ‘ask’ just as often as men. They just don’t ‘get’.”

The paper makes for vindicating reading for those of us long critical of the idea that economic inequality between men and women can be explained away by blaming female timidity. The idea that women are too scared to ask for more money has been the dominant cultural response to the now undeniable existence of the gender pay gap and the underrepresentation of women in powerful positions, parroted by mainstream publications, corporate feminists and defensive men alike.

According to Forbes, for example, women are “simply afraid to ask” for pay rises, but we’re assured that “negotiating is a necessary skill that will close the gender gap”. Sheryl Sandberg, COO of Facebook and author of the runaway bestseller Lean In: Women, Work and the Will to Lead, has built a lucrative career around telling women that “sitting at the table” is the cure for workplace inequality. And garden variety devil’s advocates, after giving up on the idea that gender-based inequality isn’t real, will almost always evoke the fabled female employee who, year after year, sucks up her paltry salary with a feeble smile; too girly to risk upsetting the boss with confrontational raise requests. The only problem is that we now know she doesn’t exist — or, more accurately, that she’s not statistically significant. Women are, in fact, asking for raises as often as men do. We’re just not getting them.

The results of this study may be surprising to some, but they’re consistent with earlier research. One study conducted in Great Britain in 2007 failed to find evidence in favor of the “women don’t ask” hypothesis. The Australian employees surveyed for this latest study on the topic were questioned in detail about their motives, behaviour, and histories, meaning that the “Do Women Ask?” authors could control for variables unavailable to previous researchers, such as hours worked, firm size, union membership, social class and education.

After rigorous analysis and a stringent peer review process, the authors found that they “could not support the idea that women are disproportionately wary of requesting a raise in salary”; a charge, they note, that “potentially assigns part of the responsibility for the gender pay gap on to female behaviour.” Instead, their research demonstrates that women do ask for pay rises as often as men do, irrespective of whether they are in large or small companies or have dependent children, the length of their tenure or education levels. Controlling for all these variables, the key finding remained the same: women are asking for more money at the same rates men are, but are being told no more often.

The $64,000 question, of course, is why. The study stops short of providing conclusive answers, and leaves open the possibility that, even though women ask for raises as often as men, they may not be asking in the right way; an explanation that the Lean In crowd will no doubt relish (and profit from). However, this explanation doesn’t gel well with the authors’ explicit finding that there is “no support” for the idea that women do not ask for more money because it could be viewed as pushy or “out‐of‐role” behavior; in other words, too unfeminine. Alternative explanations seem more plausible, and one of those may be that employers will always try to lowball their workers — and, because misogyny is baked into society like the burnt-on crud of your apartment’s oldest roasting dish, simply find it easier to do this to women. As journalist Britt Mann put it recently, “Men just find it harder to lie to other men and tell them there’s no more biscuits in the tin… this shit needs to end now.”

If there are, in fact, plenty of biscuits in the tin for everyone, but bosses are hoarding almost all of them with the helpful assistance of structural sexism, then blaming women’s behaviour for their low cookie count seems cruel and wrongheaded. But it’s a line of argument we’ve heard many times before, and one that refuses to die: members of disadvantaged or marginalised groups should simply pull themselves up by their bootstraps, lean in, and reap the rewards of the meritocracy.

Whether it’s low(er)-paid women, beneficiaries, millennials or indigenous peoples, the logic is always the same: individuals are failing to make rational, self-interested decisions, and are therefore to blame for their Broke Boi circumstances. If they worked a bit harder, saved a bit more cash, scrapped the smashed avo on toast and watched the right motivational videos on YouTube, their money woes would vanish. The idea that wider forces might be at play — like brutal economic inequality, the decline of collective bargaining and widespread discrimination and harassment — is skipped over quicker than a glitching powerpoint slide at a TED Talk. Better, the Sandbergites say, to focus on the self.

It’s hard to buy the line that the gender pay gap is an individual problem, though, and studies like “Do Women Ask?” help show that it probably isn’t. The idea that women can plan, prepare and package ourselves out of this mess isn’t borne out by the data; and if all this talk of rational choice, self-improvement and meritocracy sounds suspiciously like sloganeering for the kind of neoliberal economic model that most benefits the wealthy, that’s because it is. It’s no coincidence that the corporations, C-Suite executives and wealthy motivational speakers that evangelise about the negotiating strategies that can power individual women ahead — while keeping mum about the systemic tensions that guarantee most women will be left behind — all have a vested financial interest in the business-as-usual approach. After all, who cleans the corporate boardrooms, raises the next generation of workers, and assembles our iPhones for $1.50 an hour if we’re all dazzlingly wealthy CEOs?

True advocacy for all women is too threatening, because it entails a radical redistribution of wealth and power that will necessarily hit the denizens of Silicon Valley, Wall Street and Remuera in the pocket. Much better to keep us conceiving of ourselves as one-woman businesses who, with enough savvy negotiation, elbow grease and SheEO know-how, can one day join the ranks of the filthy rich.

The fact that there’s room at the top for a few more females armed with tasteful cream blazers and assertive business jargon should not console the vast majority of us, who are left to toil precariously in a social and economic system characterised by extractive profiteering, ruthless competition and brutal inequality. That’s just how it works. As long as we have a working class, roughly half of it will be female by default; and when you throw systemic androcentrism and misogyny into the mix, bosses get an even better deal on the price of female labour. We can ask for more money, and some of us may even get it, but we can’t keep pretending that the answer to economic inequality is saying yes to everything and making stress our friend. Our problems are much, much bigger than that, and their solutions far more collective.