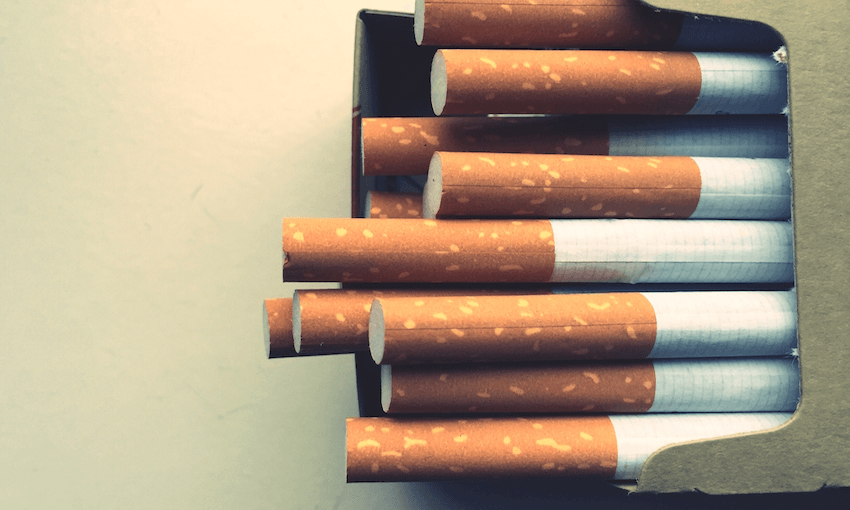 Achieving Smokefree 2025 goal will be costly. The alternative is much costlier

We have had the 2025 goal since 2011 but are not currently on track. A boost in funding and commitment is required, writes public health expert Robert Beaglehole.

Colin still haunts me. He was the first hospital patient I talked with as a young medical student in Dunedin in 1965. He was coughing blood from lung cancer caused by his long history of cigarette smoking. I was shocked and powerless; treatment of advanced lung cancer, then as now, is mainly palliative. Along with many other personal experiences of the uniquely harmful effects of cigarettes, my passion for a smokefree country led to the formation of ASH, Action for Smoking and Health, in 1982.

Aotearoa has long been a global leader in tackling smoking, beginning with the Smokefree Environments Act of 1990 introduced by Helen Clark, then minister of health. In 2011, the government committed to the smokefree 2025 goal – less than 5% of adults smoking cigarettes – as a result of the Māori Affairs Select Committee inquiry into the effects of the tobacco industry on Māori. Tariana Turia implemented several of the committee’s recommendations as associate health minister, including plain packaging and one of the world’s most aggressive tobacco tax regimes.

From my time as director of chronic disease prevention at the World Health Organisation, I know that New Zealand leads the world in implementing the recommendations of the WHO Framework Convention on Tobacco Control, including high taxes, plain packaging, and restrictions on advertising and promotion of cigarettes. However, global progress over the 15 years since the ratification of the FCTC has been slow, and very few other countries have done as well as New Zealand.

Smoking continues to decline in New Zealand. In 1976 when the census first asked about smoking, 36% of adults smoked daily; now it is 12%. Even more impressive has been the decline in youth smoking. ASH data shows that only 2% of young people now smoke daily, down from 15% 20 years ago.

Cigarette smoking is now a marker of social and economic disadvantage. Smoking rates are four times higher in the most disadvantaged groups compared with the most advantaged. In the last decade alone, the proportion of smokers from the poorest communities has grown from 30% to 40%. Not only do the poor experience most of the health effects of smoking, but they also pay most of the $2 billion in cigarette tax collected by the government.

I am optimistic that we can accelerate the decline in smoking, especially for people with high smoking rates. The 2020 election manifesto of the Labour party promised a plan to reach the smokefree 2025 goal, and the government has reaffirmed its commitment to this goal. It recently released a draft proposal for a smokefree Aotearoa 2025 action plan. It is comprehensive and ambitious and has been widely welcomed, including by ASH.

Most importantly the plan recognises the need to ramp up actions to encourage and support more people to make more quit attempts, more often. In addition, the plan proposes a wide range of possible interventions to reduce the acceptability, accessibility, and affordability of cigarettes; phasing out the number of sales outlets for cigarettes; reducing the nicotine content of cigarettes to make them less addictive; creating a smokefree generation whereby people born after, say 2004, would never be lawfully sold cigarettes; setting a minimum price for cigarettes, and removing filters and various additives from cigarettes.

These proposed interventions are ambitious. And this is their weakness. They will cost political capital and will take a long time to implement. Many of the recommendations will be contested by the tobacco industry, leading to possible trade disputes and diversion away from our short-term goal. Unless stringent efforts are put in place at our ports to reduce illicit imports, the black market, already estimated to be up to 10% of total sales, will only expand.

Measures to reduce cigarette supply will be significantly compromised unless we first reduce the demand for smoked tobacco. We must support smokers to transition to less harmful alternatives, notably vaping. People smoke cigarettes for the nicotine, but whilst it is addictive, nicotine does not kill people. It is the tar from the smoke in burning tobacco that kills people. Vaping mimics smoking by allowing the user to access nicotine without the toxins from burnt tobacco. In a nutshell, vaping is less harmful and enables many people to quit smoking. It is also much cheaper. Promoting vaping is an example of a harm reduction strategy, an approach that has been successful with many other public health problems, such as preventing HIV infections.

Concern about the rapid rise in vaping in New Zealand relates to youth vaping. It is a frequent topic of comment from schools and parents concerned about an apparent “epidemic” of vaping amongst young people. Undoubtedly youth will experiment with vaping, as they do with many other things, to the dismay of adults. Legislation last year struck a balance between the needs of adult smokers who want to quit using vaping and discouraging non-smokers, especially children, from taking up vaping.

The overall public health goal is to reduce the burden of preventable death and disease caused by cigarette smoking. Our focus must be on the 500,000 adults who smoke cigarettes daily, 40% of whom live in our most impoverished communities. To reach the smokefree 2025 goal, we will need to increase long term smoking quit numbers from 15,000 a year to about 60,000 a year, or 5,000 a month. While a considerable challenge, it will make the most significant contribution to health equity.

The 2021 budget allocated an extra $36 million to smoking control over the next four years, an amount to be welcomed. Still, it is a derisory amount considering the tax revenue cigarettes generate and the costs of smoking to the individuals and their families, the health system, and society.

Reengagement with ASH five years ago rekindled my passion for reducing the devastating effects of cigarette smoking. Take Brian, a close friend. After 40 years of smoking, he is now receiving radiotherapy to control his lung cancer. I was unable to convince him to quit until just a few years ago. Then, he used to laugh at my efforts: “Please pass me a cancer stick,” he’d say. Now he says he would do anything to get rid of the cancer. Regrettably, it’s too late.

But it may not be too late for the majority of the 500,000 adults who still smoke cigarettes. If we build on Covid-19 lessons, especially the alignment of public health goals with scientific evidence and the importance of bold and inclusive leadership, I am confident we can accelerate progress towards a smokefree Aotearoa New Zealand by 2025.