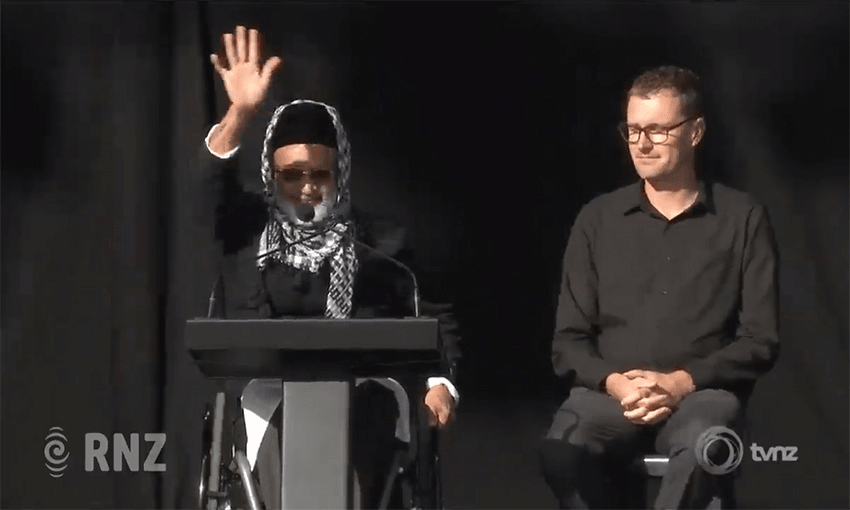 ‘If our heart is full of love then peace will start from here’: a Christchurch survivor speaks

Christchurch shooting survivor Farid Ahmed, whose wife was killed on March 15, spoke at the National Remembrance Service today. This is his speech.

Allah says in the Qur’an, “Do not say about those who are killed in the service of Allah, in the worship of Allah, that they are dead, but know they are living. Their soul is alive. But you do not perceive it.”

We believe that people who die in the good cause, that people who are killed in their worship, they are in paradise. Their body is going to be perished, but their souls are not. Their souls are in paradise, they are being hospitalised by Allah merciful. We also believe that people who survive with injury, all the families who are going through struggles, for their patience Allah is going to reward them, and today, in front of all of us, I would like to offer my sincere prayers for the people who have been killed and also people who survived. I would also like to offer my prayers to New Zealanders and New Zealand for safety and security. And also I would like to offer my prayers to the people in this world for peace and happiness.

People ask me, why did you forgive someone who has killed your beloved wife? The answer to this is I can give so many answers, but because of the time I will give only a couple points. The first point is, I have a faith, I believe in Allah, and Allah says if we forgive one another, he loves me, he loves us. In the holy Qur’an Allah says, “those who control their anger, and pardon their fellow human, Allah loves those who are good doers,” so I forgive and Muslims forgive, because they are taught by the Qur’an that if they forgive then Allah will love them. I will give one more reason: I follow one prophet like all other messengers of god, of Allah, that he is titled Muhammad, a mercy for all creation. Allah said “Oh my messenger, I have sent you as a mercy for the world”, so without forgiveness, without showing mercy, I cannot be a true follower of him.

Also, I don’t want to have a heart that is boiling like a volcano. A volcano has anger, fury, rage, it doesn’t have peace. It has hatred, it burns itself within, and it burns the surrounding. I don’t want to have a heart like this and I believe no one does. I want a heart that is full of love and care and full of mercy, and will forgive lavishly, because this heart doesn’t want any more life to be lost. This heart doesn’t like that the pain I have gone through, that any human being should go through. That’s why I have chosen peace, love and I have forgiven.

People have asked me why do you love him as a human brother and the answer to this is our brother imam has recited the verse from the Qur’an, that says “Oh Mankind, we have created you from a single pair of male and female”, referring to father Adam and mother Eve, so we all are Adam’s children, Eve’s children, we are one single family. We are human brothers and sisters. How can I hate my human brother? I don’t agree with what he has done, I don’t support what he has done, probably he has misunderstood the whole thing, probably he had gone through suffering in his life, some traumatic thing has happened, and he could not process his suffering in the right way. I don’t support his action but I cannot deny he is my human brother. Each human being is my brother or sister. This is what Allah taught. I cannot hate him. I cannot hate anyone.

May Allah guide us towards peace, safety and security, and may Allah make new zealand peaceful and the whole world peaceful.