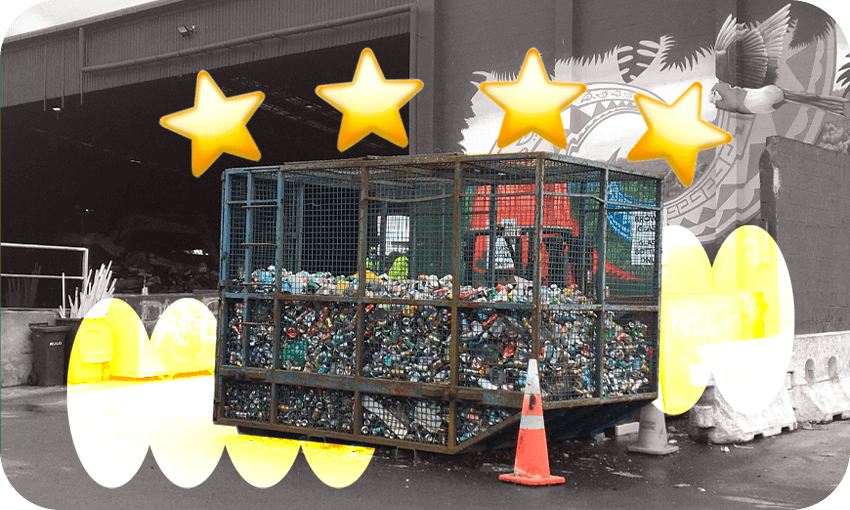 How did a rubbish disposal site earn so many thoughtful, positive reviews online? Gabi Lardies investigates.

Nestled between state highway 16 and the mangroved Te Atatū estuary is one of Auckland’s top-rated destinations. It is so good, in fact, that 254 people have been compelled to review it on Google, giving the place an average 4.1 star review. Some of the reviews are lengthy – chunky paragraphs or even multiple stanzas, and many are accompanied by photos. They are impassioned, adamant or astounded. What in this dead end, light industrial zone is stirring these emotions? A dump.

Officially the Waitākere Refuse and Recycling Centre, it’s a drive-through complex where you can drop off just about anything you don’t want any more: car bodies, green waste, whiteware, light bulbs, anti freeze and even animal carcasses – as long as they are wrapped up and declared on arrival. There’s also a shop, Tipping Point, a last chance to save treasure from the landfill. On weekends, Aucklanders are so keen that cars queue up along the narrow street. Any who step out of their cars in jandals or crocs however, will be turned away. The council simply does not want to be held accountable for lost toes. Oh, and forget asbestos – that is not welcome here.

But why do people love this dump so much? Why does its rating rival the Sky Tower (4.5), the Auckland Art Gallery (4.5), Rangitoto (4.6) and Kelly Tarltons (4.3)? The Mermaid, an upmarket stripclub downtown, has a Google rating of only 3.4 stars.  Obviously, this trash rat had to find out.

The reviews have prepared me for the weighbridge and gate barrier operators. “Friendly ladies at the weigh-in bridge,” says regular John W. Mark Baker agrees, “Lovely ladies to welcome you.” Today, she is wearing her long dark hair in a plait, and flashes a mega smile at me. “To the shop?” she asks. When I respond, “Yes, to the shop!” I get a thumbs up and the barrier lifts. I regret that it all happened so quickly, but there’s already another car behind me.

A flock of seagulls circles above the roof of the central shed. Inside, a digger is compressing a pile of shit to take to the landfill. A Green Gorilla truck tips its skip, and the digger begins to scoop it up. I turn left, into gate five. This is Tipping Point. It’s a mega cluster of inorganic waste collections. On their Facebook page, they claim inflation doesn’t exist here. Forget the cost of living crisis – all appliances are half price.

There are bargains to be had, with prices that, according to Aleah Lutau, are “less than nothing”. Outside, there’s car bumpers, piles of wood, windows, tiles, wind surf boards and a couple of ambulant toilets. There’s also mini electric cars for $20, and rows and rows of bikes that look better than mine if you replace the rusty chains, for $50. The staff, recognisable by their yellow high vis, are clustered around the shed that keeps furniture dry. They’re nailing up a new acquisition, a massive New Zealand flag.

Inside, there’s a lady with a frangipani in her hair distributing stock around the shop. She pulls items from a supermarket trolley then places them in an appropriate nook. There’s an area for fancy glass items, and the kitchen area where the more regular glass things go, alongside novelty mugs and boxes of cutlery. At the back are the clothes, ordered by colour on racks. One corner is crammed with books, another, toys. There’s a section called “the great outdoors” and an electronics aisle. I can’t figure out what the things there are for. On the floor a man is sorting through a basket of remote controls, seemingly not having much luck. Fleetwood Mac floats out of an area filled with speakers. The shop is housed in a big corrugated iron shed, but it’s so full you can barely see the structure.

There’s something sickening about being around so much stuff. Sure, I’m overstimulated by the colours, the textures, the sounds and slight smell. But more than that, I’m uneasy. I sift around looking at stuff. I don’t actually want any of it, even though it’s mostly fine and useful, just in need of a scrub. I feel like WALL-E, like there’s a mammoth task of cleaning up to do, but I can’t compress or bale anything. I pick up a meat tenderiser. I guess I could use it to make snitchels. I guess it would fit in a drawer. In the next jar of utensils, there’s retro sausage tongs, which I reckon would be useful for reaching into the oven and turning over roasting vegetables.

I take my two finds to the counter, and ring the bell. Seeing my unambitious desires, the lady says “Got a two dollar coin? Or a one dollar?” But alas, there’s nothing golden or silver in my wallet, only plastic. She waves it away. Today, my treasures are free. “You like our shop?” she must have noticed how long I stayed, going all up and down the aisles, looking in every nook and on every shelf. “It’s the best shop in Auckland, aye?”

Today though, most of the action is outside. There’s three or four diggers going, trucks and forklifts turning over skips just about everywhere I look. A washing machine tumbles out of one. Pedestrians aren’t allowed beyond the confines of the shop, but getting out requires driving all the way around. It’s like a rubbish safari. In one forlorn corner, tyres doze and lean on each other. A whole lot of cans peck against their yellow cage. Further along the route, endless pallets gather in a massive shed. A man sweeps leaves out of his car boot.

This is what one reviewer considered a “real hotspot.” It’s described by another as a “total cluster of extreme disorganised chaos”. Vincent Rousseau had “A truly sublime refuse experience, curated by talented passionate professionals.” Unfortunately, “they won’t let you play with the front end loader”. Still, the staff seem to have taken many hearts. “The Pākehā bloke that was working today was a legend, even offered him some smokes because he was that awesome but he was a non-smoker so he declined,” says Paul Y. For me, it was that frangipani, and that bright, quick smile.

According to research, my dump experience wouldn’t be complete without a visit to the Mexican joint just up the road. Cielito Lindo’s reviews beat even the dump’s – 4.7 stars from 350 reviews. Not all reviewers are aware of the neighbourhood symbiosis though. Vanida says “the location is a bit hidden and not as glamorous as you expect,” and Peter De Lange says, “Don’t let the surroundings fool you.”

Cielito Lindo is in the cinder block ground floor of a two-storey building, its outside painted in pastels. My tacos, one napales because I was feeling brave, and the other cachete because yum, arrive quickly. The napales are relievingly not slimy. The cachete is tender and juicy. Both zing with fresh lime and littering of chilli flakes. I haven’t bought hand sanitiser with me, so everything I touched at the dump is now touching my tacos. A truck passes by. I sip my hibiscus drink. This is our biggest city’s quintessential, almost five star, entertainment and dining experience.

Gabi Lardies is a cadet in the Next Page cadetship programme, public interest journalism funded through NZ On Air.