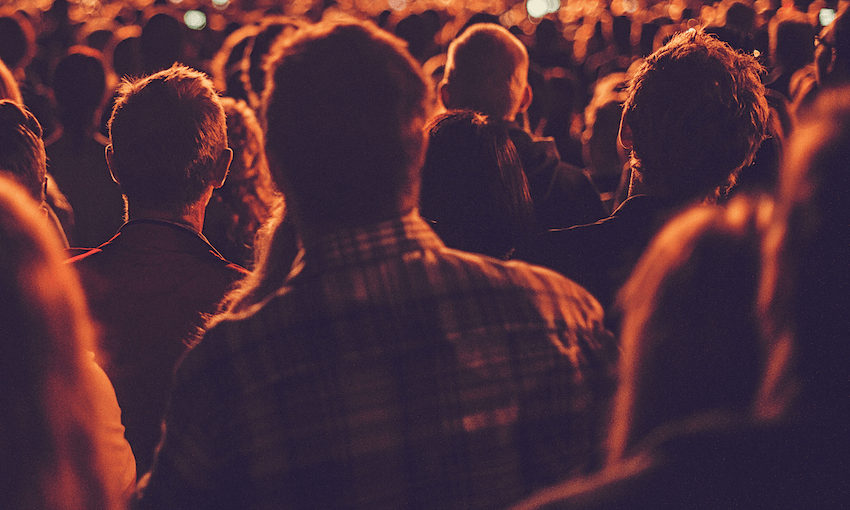 Finding solace in the crowd

Crowd-hater Michelle Langstone discovers a new appreciation for the maelstrom of humanity.

I’ve always found crowds panic-inducing, sweaty, noisy and lacking in manners. My attitude to crowds is akin to an 80-year-old woman who’s cross about the neighbour’s dog getting into her garden — no time for it, inclined to give people a real dressing down. I’m the person who finds herself in a crowd and makes a beeline for the exit, glaring and swearing under my breath.

In some ways, Covid-19 has been a gift for the crowd-phobic among us. It’s been well over eight months since I’ve been anywhere involving a crowd. Crowds have been banished in the year of the pandemic, and I have welcomed the personal space, and the peace and quiet.

It didn’t occur to me when I got tickets to the opening night of Mary Poppins at Auckland’s Civic that there would be a crowd. I don’t know what I was expecting — perfectly socially distanced seating and subdued appreciation, probably. I guess I hoped audience numbers had been permanently reduced to the more modest size that I enjoyed. Instead, I dragged my sister and nieces into a maelstrom of humanity on a Friday night, and was assaulted by throngs of people packed in like sardines, waiting in massive queues to get through the doors to see a lady with an umbrella.

I went into shock. My default glare materialised on my face like magic, I was surly, stressed, and I wanted to swear, but I had two small children beside me and I wasn’t allowed. I looked down at the smallest one, and she was gazing around her in awe. “So many people!” she said, tugging on my hand. “Look at all these people Aunty Mouse!”

I don’t want to say that I had an epiphany in the foyer of the Civic, but it dawned on me all of a sudden that the crush of a crowd was a good problem to have. All these people dressed up for a night at the theatre, all these kids bouncing up and down with excitement — it’s only possible because we live in a country that has managed to keep Covid-19 at bay, allowing performance to open up to the public again. A lady cut in line ahead of me and I harboured brief thoughts of revenge, but I was so overcome with the spirit of newfound gratitude that I let it go. I just let it all go, and I inched along in the queues, grasping my niece’s tiny hand as she hopped from foot to foot, getting elbowed by strangers, and having my feet trod on by rampaging kids, and liked it.

I liked it because the crush of the audience seemed like an emblem for health, and for success. I liked seeing the rows of seats fill up, and all the tilted heads of children staring in wonder at the stars and clouds on the ceiling. I liked having to wait in line to buy M&Ms and ice cream – it really ramped up the anticipation, and I liked having to shout to be heard. I even liked having to stand up 11,000 times while tardy theatregoers jostled past in the dark on their way to their seats.

It was joyful to be part of something en masse, to feel optimistic and to feed off the happiness of all the kids, who couldn’t believe their luck. We had to apologise to the people directly behind us because our smallest family member kept wriggling and bumping her seat into their knees, that’s how close we were to strangers.

I’m not actually sure how good the show was, I was so distracted by the crowd. When the audience clapped in time to ‘Supercalifragilisticexpialidocious’, I clapped along unreservedly, and I am not a public clapper — that’s how uplifted I was. We sent a selfie to our family group thread, and I felt bad immediately, because my family in California are on that thread, and they haven’t even been able to eat at a restaurant since March.

I sat there for the duration feeling darn lucky. At the end of the show the performers acknowledged all the theatres around the world that remain dark, as countries struggle to get on top of Covid-19 outbreaks. I felt the collective intake of breath from the audience around me, and the solemnity, as we registered the fortunate position we enjoy down here at the bottom of the world.

God knows the end of 2020 is dragging on. A lot of goodwill was expended earlier in the year, and the tanks of enthusiasm are dry. The New Zealand election delay made husks of the best of us. But for two-and-a-half precious hours I felt some solidarity and joy; just one of many in a cheerful crowd, a luxury it’s impossible to overstate.