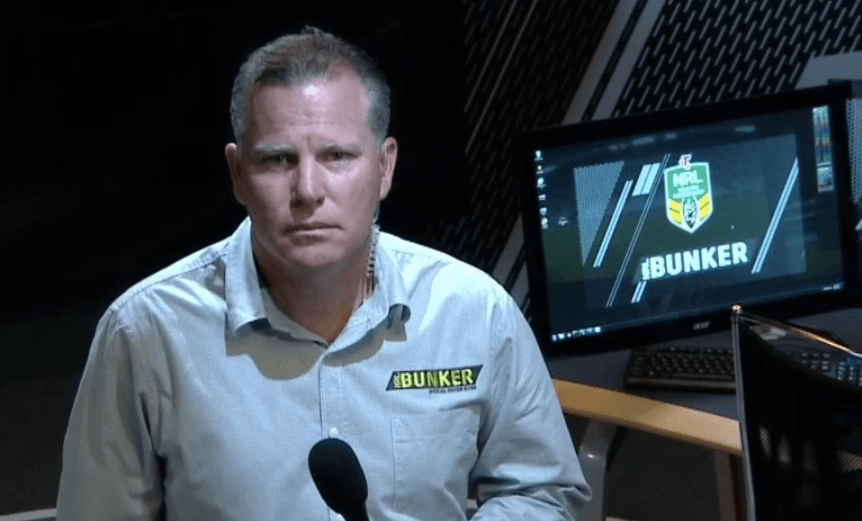 The NRL set up the @NRLBunker Twitter account in an attempt at transparency. Instead it has become a multi-media sideshow brimming with fan fury. Calum Henderson scoured the account for this list of devastating burns.

Getting absolutely fuming mad and shouting at the ref every time he makes what you perceive to be a wrong decision is a hugely important part of rugby league culture. Until very recently, however, it was something you could only really do in person, howling ineffectively from the stands every time a remotely marginal call went against your team. “Hey ref! You suck!”

The arrival of the state-of-the-art, $2 million NRL Bunker this year has changed everything. Not by eliminating bad decisions from the game – definitely not that – but by starting a Twitter account people can shout at as if it was an actual ref and they were at the actual game.

In an earnest attempt at providing footy fans with transparency surrounding their decision making, the new video referral system has been tweeting the result of every referral from the Twitter account @NRLBunker.

It started out promisingly. For the first couple of games the Bunker seemed to be working the way the NRL referees’ boss Tony Archer had said it would. At first, people even tweeted praise at the NRL Bunker.

The first murmurs of discontent seem to have come in the 79th minute of the Warriors’ Round 1 loss to the Tigers, when the Tigers were awarded a try after being adjudged to have knocked the ball back in the lead-up to the try. Warriors fans thought the ball was lost forward.

“Wrong,” one tweeted back at the Bunker. “Horrible decision,” tweeted another. Somebody else tweeted an image macro of Karl Pilkington saying “BULLSHIT!”

Since then, hardly a game has gone by where the Bunker hasn’t ballsed something up and incurred the wrath of the rugby league Twitter hardcore. As anti-bunker sentiment around the league grew, the tweets started getting angrier and angrier. After a particularly controversial decision in the March 19 Bulldogs vs Eels game, the account briefly trialed posting video content of Tony Archer explaining the decisions from the Bunker floor.

The account is essentially a bot – it just tweets the decisions in a sort of bland refspeak, adorned with all the relevant hashtags. It doesn’t follow anyone but the official @NRL account, it never tweets back, and it’s highly unlikely that anyone in the Bunker has ever checked the account’s notifications. But that doesn’t stop furious fans from smashing the reply button as if it were a direct line to the refs themselves. At the time of tweeting, these were some of the angriest people in the world.

While this might sound like an unmitigated disaster for the NRL, following the Bunker on Twitter has in fact added an extra dimension to the game for fans watching at home. It has become an entertaining side-show to the main event, allowing fans watching at home to feel like they’re right there in the stands listening to furious loudmouths hurl insults at the ref.

Here are some of the names angry league fans have called the NRL Bunker in its first two months: