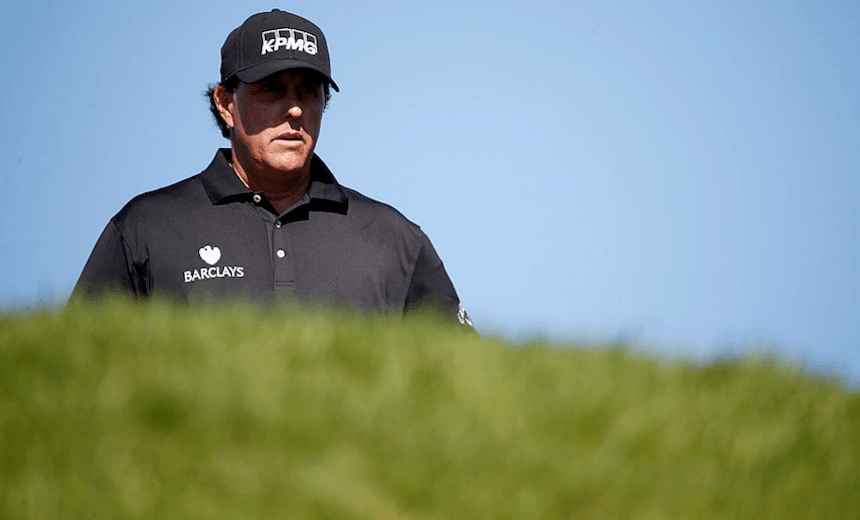 Greg Bruce charts the agony of the five-time major winner, who has met the bane of his golfing life in the form of a young man mere weeks out of high school.

What must it be like to be Phil Mickelson? For a long time, he lived in the shadow of Tiger; he may have been considered one of the all time greats, if not for Tiger. But Tiger is gone now, and still Phil is out there, slogging along, at age 45, being regularly trounced by kids in their early 20s.

Over the past few weeks, and most notably this past weekend, Mickelson has been repeatedly humiliated by an Australian child who probably hero worships him and who can probably imagine nothing worse than humiliating Phil Mickelson and, as everyone knows, unintentional humiliation is the worst humiliation.

Ryan Ruffels, 17, of Australia, played a round of golf with Phil Mickelson in December for an amount that is now disputed, but which was reported in the Sydney Morning Herald as being $2500 at odds of 2/1. These odds, presumably set by Mickelson, winner of five major titles, in a match against a kid about five weeks out of high school, seem astonishingly ungenerous.

That is neither here nor there because the Herald reported that Ruffels birdied six of the last seven holes to beat Mickelson. Ruffels is reported as saying in the Herald, “took his money so that’s pretty cool.”

The article also included the incredible quote, attributed to Mickelson, although since denied by his camp, “I don’t wake up this early to play for any less than $2,500.”

For whatever reason, and for whatever amount of cash, Mickelson lost. There are ways to deal with this, none of which Mickelson appears to have been familiar with.

Until now I’ve been downplaying the fact that, although still a child, Ruffels is a talented player who is going to turn pro later this year. The more useful narrative, and to some extent the truth, is that he was a naïve baby in competition with an overweight master.

Last weekend, Ruffels was given an exemption to play in the US PGA Tour tournament at Torrey Pines, where Mickelson was also playing, leading to some of the most thrilling press conference bullying seen in golf for some time.

“He’s young,” Mickelson said, accurately, in response to a question about Ruffels, “and he’s got some things to learn. One of them is you don’t discuss certain things. You don’t discuss specifics of what you play for. And you certainly don’t embellish and create a false amount just for your own benefit. So those things right there are – that’s high school stuff, and he’s going to have to stop doing that now that he’s out on the PGA Tour.”

Accusing a boy who has just finished high school of acting like he is at high school is itself a very high school thing to do, both in its excessive sense of grievance and in its unawareness of irony.

Ruffels, who, just to remind you, is 17, went on to play two solid rounds of golf and make the cut, eventually finishing in a tie for 43rd, while Mickelson played two sad and possibly bitter rounds of golf, missed the cut and finished nowhere.

After making the cut, 17-year-old Ruffels was asked about Mickelson’s pre-tournament comments and said: “It was difficult and a little added pressure.”

“There’s going to be times in my career that there’s going to be off-course distractions that I have and they’re going to be there and I felt like that was, I guess, mature of me, if that’s the right word, to put that aside and focus on the golf and play some good golf this week.”

I can’t say for sure whether a communications expert prepared that answer in advance, but if so, that communications expert is among the best in the game. To call all time great Phil Mickelson’s pre-tournament bullying a ‘distraction’, to use the word ‘mature’ like a knife against him, so subtly and subversively, Ruffels reduced Mickelson to meaninglessness without ever saying his name.

What rage must arise in the middle aged sportsperson as his body, once so perfectly under his control, wrests free and does what it wants, which, increasingly, is to wilt. The critical challenge for the middle age sportsperson is to direct that rage somewhere other than the person who will soon, if he hasn’t already, eclipsed him.