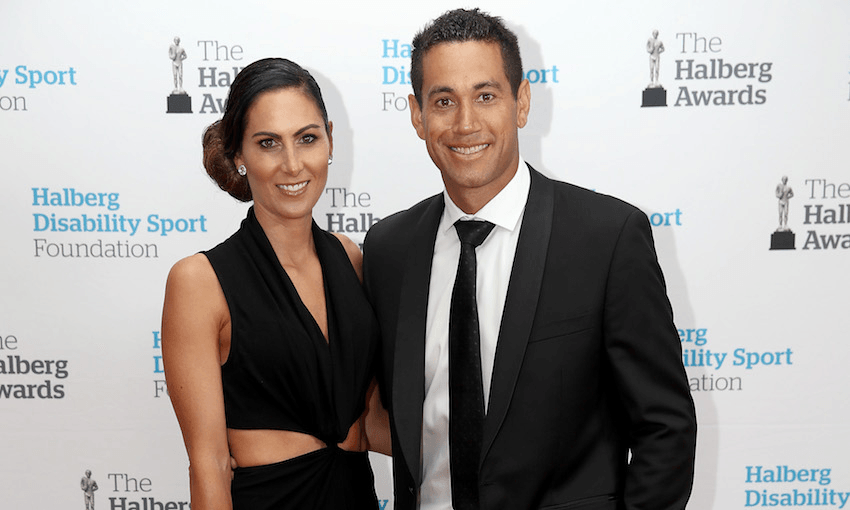 Ross Taylor and Victoria Brown pose as they arrive ahead of the 55th Halberg Awards. (Photo by Phil Walter/Getty Images)

Ross Taylor and Victoria Brown pose as they arrive ahead of the 55th Halberg Awards. (Photo by Phil Walter/Getty Images)

After his heroic innings, Ross Taylor stood on the boundary rope at University Oval and stared adoringly at his wife, Victoria Brown. She was largely to thank for this moment, having also been a top cricketer. Someone threw him a Powerade, which he accepted, but everyone present knew he’d rather have a glass of wine. His wife and a red, that’s all Ross Taylor ever needed.

With two runs on the board and two wickets down, the boys were in trouble. The Black Caps, New Zealand’s men’s cricket team, needed a miracle if they wanted to catch England’s total of 335 runs. Luckily they had Ross Taylor.

Taylor, who’s made a name for himself with his funny and relatable Twitter feed, sauntered out to the middle. His uniform fit well, despite an argument forming in recent weeks that the Black Caps uniforms were too feminine and needed more skin. He looked nervous. This was a big moment for him, and with the crowd cheering and thousands watching at home, it was a coin toss whether Taylor would be able to handle the pressure.

Against all odds, he did. Thanks to some inconsistent bowling and lacklustre fielding from the England boys, Taylor was able to take advantage and record an unlikely century.

Ross Taylor has defied the odds at every step in his career. Making his debut at 22 for the men’s top side, he risked falling into the common trap with top male athletes: singledom. “His confidence in his abilities intimidated me,” said one potential suitor from 2007. “I didn’t like the idea that he might beat me in an arm wrestle,” she laughed. But despite everything, he married former Northern Districts star Victoria Brown in 2011. Three months later his first child was born and in the midst of juggling baby bottles with cricket balls, Taylor was left to wonder if it was really possible for a man to have it all. He seriously considered giving it all up and staying home to take care of his new family. But thanks to the support of his partner, Taylor was able to return to the field mere weeks after his child’s birth.

Taylor suffered cramps during his innings, a common ailment in men that’s not often talked about publicly. When he admitted to feeling weak as a result of the cramps, many fans took to Twitter to protest his vulgar language. “We’re not paying you to complain about your guy problems, just play,” tweeted one angry woman. “Gross,” tweeted another.

By the final over, Taylor could barely walk. Even if he hadn’t won the game for the men, his bravery in staying out there so long deserves a round of applause. He has shown young boys all over New Zealand that anything is possible.

During his Man of the Match press conference, Taylor looked exhausted. He had a fresh, natural look, and his uniform was stuck to his body, outlining his strong thighs. When asked if this achievement meant more to him because he was married, Taylor looked confused. A reporter asked how he juggled parenthood with his training, to which he responded “what are you talking about?” When a follow up question was presented by journalist in the audience asking if he had heard the wolf whistles from women in the crowd, Taylor snapped “why are you asking me these questions?”

When the conference ended, he left the room briskly and without smiling.

Taylor has since been maligned for being “unnecessarily rude” and “ungrateful” during the press conference. He released a statement of apology this morning, which has gone some way to earning back the trust of his fans.