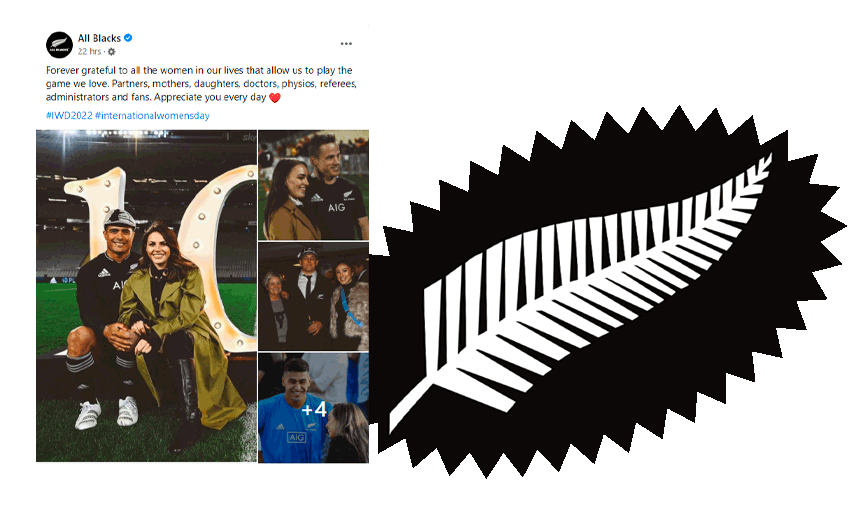 By Jen Vermeulen
Guest writer
Made possible by

International Women’s Day was an opportunity for NZ Rugby to celebrate women players, including the world champion Black Ferns team. Instead it paid tribute to ‘all the women who allow men to play the game they love’.

Not even a week ago, NZ Rugby CEO Mark Robinson called women’s rugby a “strategic priority” for the organisation. Women’s rugby has been acknowledged as the fastest growing part of the sport, and this is a year full of milestones for the game. Top Black Ferns are on full time contracts for the first time, the new Super Rugby Aupiki competition has just launched, and the Black Ferns, one of the sport’s most successful teams, will be defending a World Cup on home soil come September.

As a social media manager for almost 10 years, I know social can be tricky to get right, but with so much to celebrate in the women’s game, coming up with a social media post on International Women’s Day should have been an easy win. It’s there for the taking–women at the top of their game, women who have blazed a path on the pitch, women who have overcome every obstacle to be where they are today. Instead, NZ Rugby used the All Blacks accounts, their biggest digital footprint, to celebrate the women who allow men to play the game they love with this post:

On a day that is meant to draw attention to continued gender oppression, pay disparity, men’s violence against women, and the structural disadvantage women face in the wake of thousands of years of patriarchy, this post celebrates women only through what they give to men. Their only value and contribution is as wives, mothers, supporters. It’s what they can do for men, that allows them to have value to men. It’s dressed up as a feel-good thank you, but it robs women of agency, and of their own achievements.

This is a broader issue with the commercialisation of International Women’s Day so maybe we can’t blame NZ Rugby for that. The history of International Women’s Day is rooted in political activism by working class women. It’s not the polite feminism of a cute Instagram pic and a pink cupcake from your still predominantly male leadership team. All the NZ Rugby post did is instrumentalise women on a day that is meant to highlight exactly how harmful that behaviour is. Spoiler for the men who still do not get it: women are not accessories to your greatness, women have value outside of their role in your life.

The issue is then further compacted by the choice of men who are being celebrated in this particular post. Two of these men do not have a stellar record in their treatment of women: Aaron Smith was embroiled in a very public sex scandal in 2017, and Sevu Reece pleaded guilty to assaulting his partner in 2018. There is a valuable conversation to be had about cancel culture, and the space needed for redemption and rehabilitation, but an International Women’s Day post is not the place to invite that conversation. It would have been so easy to simply not include photos of these men, yet even with the bar so incredibly low, NZ Rugby still tripped over it. It was also negligent from a player welfare standpoint to put these men in the firing line, while potentially exposing their partners to further hurtful public discourse.

None of this was lost on commenters across Facebook, Instagram and Twitter. One Facebook commenter wrote: “Black Ferns wahine toa, amazing in your own right, world champs and what a shame the All Blacks missed this opportunity to celebrate you. Much more relevant for International Women’s Day than a patronising message like this that demonstrates the ingrained, institutional sexism that women face every day. Appreciate the sentiment but wording is important and this is not well executed. And while everyone deserves a second chance, tone deaf to have photos of a publicly caught out cheater and a domestic abuser in this post.”

On Twitter, another commenter summed up the feelings of many: “This is probably the most tone deaf tweet I think I’ve ever seen. To include Sevu Reece on an International Women’s Day post and to not even post anything about the Black Ferns.”

This is probably the most tone deaf tweet I think I’ve ever seen.

To include Sevu Reece on an International Womens Day post and to not even post anything about the Black Ferns https://t.co/gc0G1WXQQi

The argument could be made that these are the All Blacks’ social media channels, and should therefore be about the All Blacks players. This is a fair assessment, if a clear missed opportunity to continue growing the Black Ferns channels. On those channels, the Black Ferns shared a lovely post celebrating the women who have inspired them on their journeys. If the All Blacks had taken a similar route with players sharing which women players inspire them, we wouldn’t be having this conversation. Instead, we ended up with a post that is completely clueless.

Maybe all of it could have been forgiven if the post had been taken down after these issues were raised. Instead, it went completely unacknowledged for well over 24 hours until an apology was buried on the NZ Rugby Twitter account. That silence sent a strong signal that NZ Rugby actually didn’t see anything wrong with the post, which leads to the real problem:

This isn’t a social media person making a mistake – this is an institutional failure.

In the last few months, there have been an exodus of powerful women from New Zealand Rugby, including its head of women’s rugby. Sixty per cent of staff made redundant during the organisation’s 2020 Covid-induced restructure were women. Under the shadow of the Black Ferns’ culture review, it does not suggest an organisation that champions women and their potential.

Instead, it suggested a short-sighted organisation that does not value the input of women, instead preferring to cling to the good old boys’ club. It suggests a dinosaur wilfully ignoring the comet hurtling towards it because this is the way it’s always been done, and if it just holds on long enough, it’ll be fine.

The fact that women’s rugby has made such gains is in spite of, not because of, the leadership at NZ Rugby. It’s thanks to the tireless champions of women’s rugby who have pushed and begged and borrowed to get the organisation to eke out even the tiniest amount of begrudging support.

Those are the people who you should be acknowledging on International Women’s Day, the champions for real change. If that’s too hard, if all you can manage is token lip service, perhaps it’s better to say nothing at all.

An earlier version of this post incorrectly stated that there are no women in the NZ Rugby executive team.