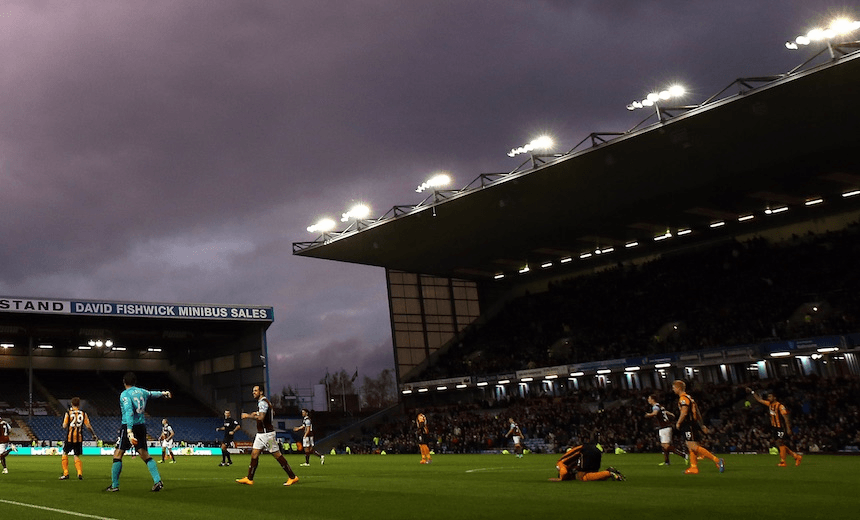 By Joseph Moore
Guest writer
Made possible by

Joseph Moore travels to the north of England for a first-hand glimpse of the team that has tortured his family for two generations and counting.

I’m sitting alone on an empty, overpriced train plummeting deep into the heart of North West England. It’s mainly overpriced because I paid extra to get a ticket which included WiFi (it doesn’t work) and a cheese and egg roll. A staff member walks down the aisle collecting the egg roll wrappers – a camp, middle aged northerner with bleached hair and one earring. He stops at my table.

“Ah can take ya roobish, and ah can also sing ya one verse of Carly Simon’s ‘You’re so Vain’. What verse would ya like: one, two or three?”

I look around to gauge what verse the three other people in the carriage want. They haven’t noticed anything is happening. I choose the first verse.

He puts his bag of garbage on my table and begins to sing, flatly:

“You walk into the party like you were walking onto a yacht, Your hat strategically dipped below…” before immediately cutting himself off.

“Ooh would ya look outside, that there is the River Trent, the third longest river in the United Kingdom… and over there’s a power fact’ry.”

He never finishes the first verse, but it doesn’t matter. I’m an hour into my pilgrimage to Turf Moor, home of Burnley FC, and it’s already my favourite live sporting event ever.

I’m heading to Burnley for my Dad, who became obsessed with their eponymous football team when he was was an impressionable 8-year-old listening to football results on the wireless in 1960s Christchurch. I think Burnley were good for like a year back then. Whatever his reasons for embracing them, it began a fandom that has consumed him and those around him for a miserable lifetime. I was given Burnley clothes to wear to school, our family cat was called Burnley, and in the months before I was born he put in a solid campaign to name me “Turf”. Throughout that time the lads in claret and blue have come a game from being relegated from professional football altogether, before trudging around the middle of 2nd division for most of the 2000s, and sneaking their way into the Premier League a total of two times, staying up there a total of zero times. While I never fully embraced the team in the way my father does – I’m a bit of a glory hunter and focus my attention on the Wellington Phoenix – I thought it was a noble, son-like thing to do to spend a day of my holiday in the UK watching his crappy soccer team play some crappy soccer.

After an exciting 1-hour layover in Preston, my second train finally slogs into Burnley. Despite the rain, the station’s hilltop position gives me a very clear view of the entire town: a supermarket, about three streets, that sweet UKIP smell… they don’t show you this part on FIFA. I walk towards the centre of town to find a pub. I’ve deliberately underdressed, in an attempt not to ‘stand out’ as an asshole out-of-towner, only to find the uniform of the British working class is designer tracksuits and the latest Nikes, aka what you wear to Ponsonby Central. I walk into one of many pubs with ‘HOME FANS ONLY’ scrawled across the door and order a pint, then drink it the corner looking an absolute doofus in my sensible pullover and trousers.

With a history older than the Treaty of Waitangi and its capacity of 20,000 accommodating almost a third of the entire town, Turf Moor is one of the UK’s purest and creakiest football grounds. I get there an hour before kick off. Apparently this is a big mistake. As I turn a corner towards the ticketing office, I’m greeted by a small parade of horse and motorcycle-mounted police officers. “Get out of here!” they yell at me, before blaring their sirens at another car trying to enter. Intense. What’s going on? Bomb squad? Terror threat?

Another police bike pulls into parking lot, escorting a series of buses. It’s the away fans. I duck out quickly, while the police / bobbies / Mister Plods escort the villainous away fans into the stadium before anyone else arrives. While I’m all for new cultural experiences, I’m not sure hooliganism is one of them. I don’t want to be punched in my non-bald head, or worse, make like Elijah Wood in the football hooligan movie and become a hooligan, slowly rising up the ranks of the sinister hooligan underground before realising the error of my ways and returning to university.

Twenty minutes pass before I’m able to buy a ticket. I walk into the stadium with a backpack. There’s no security – weird, considering I am a newly-converted football lout with a thirst for blood. The concourse has all your standard drink stalls, though the main beverages on offer are ‘Bene N Hot’ (a combination of Benedictine, the French liqueur you used to steal from your parents liquor cabinet in a pump bottle, and hot water) and ‘Bovril’ (a disgusting meat version of hot chocolate). I opt for nothing, though I’m gutted I didn’t bring any of my e-cigs with me as it’s the first stadium I’ve been to with a designated vaping area.

About 10 minutes before kick off, the entire town shows up. It’s a huge game – the opposition, Hull City, are top of the table, and had embarrassed our boys 3-0 earlier in the season, right before Burnley went on an impressive 8-game unbeaten streak. The desire for revenge is as thick as vape fumes in the air. The atmosphere is bonkers. Although there are only 17,000 people here they’re louder than any All Blacks crowd I’ve been a part of. “We hate bastards!” they sing in unison, a song directed at their arch-rivals Blackburn Rovers, who they aren’t even playing today. I try to pick up on the words, in awe of the passion I’m surrounded by.

“It’s pathetic, no one’s fookin’ singin’ t’dae”, complains a fan sitting next to me.

“This is shite!” my new mate yells at one point, before getting a text from his girlfriend and leaving at the 50-minute mark. Not long after he bails, there’s a scramble in the Hull goalbox. Notorious bad-boy Joey Barton smashes the ball at the Hull keeper, who spills it at the feet of Welsh international striker Sam Vokes. He slots home the rebound. We go bloody nuts. Not since I found myself an involuntarily member of a dog-pile at a pub during the Rugby World Cup final have I been surrounded by such joyous chaos. I’m hugging randoms like old relatives. After one goal. In a 2nd division league game with 14 games to go.

Burnley hold the lead and take the win. The crowd is ecstatic – they’re now 3rd on the table. Only one place away from automatic promotion to the Premier League, which means they are potentially only one year away from getting relegated from the Premier League!

It’s dark as I walk back to the station. Inside, I see a group of lads in their early 20s with cut lips, bruised heads, and blood on their faces and arms. Hull fans.

“What happened to yas?” A sympathetic Burnley fan asks.

“Our fault, we was singing our songs when we was walking up to the station. A guy taps me on the shoulder and we just get creamed” one replies. “I’d never thrown a punch in me life!”

“Aye it’s your fault, everyone knows to keep your mouth shut after a game.”

They share a 4-pack of cider and debate among themselves which nightclubs in Manchester might let them in with blood on their faces. One pulls out his phone and shows the other a text.

I board my train happy that my Dad gave me the opposite advice. The return journey takes a little over three hours back to London. I don’t think old mate Carly Simon is working this leg. Pity, because after a long afternoon of it, I’ve grown quite fond of passionately flat singing by middle-aged British men. I’m sure I’ll be back, or at the very least back in spirit, as I one day force my son or daughter into going on a bleak pilgrimage of their very own.

Find your own personal Burnley – maybe Sunderland, or Norwich City – live and on demand at Premier League Pass.