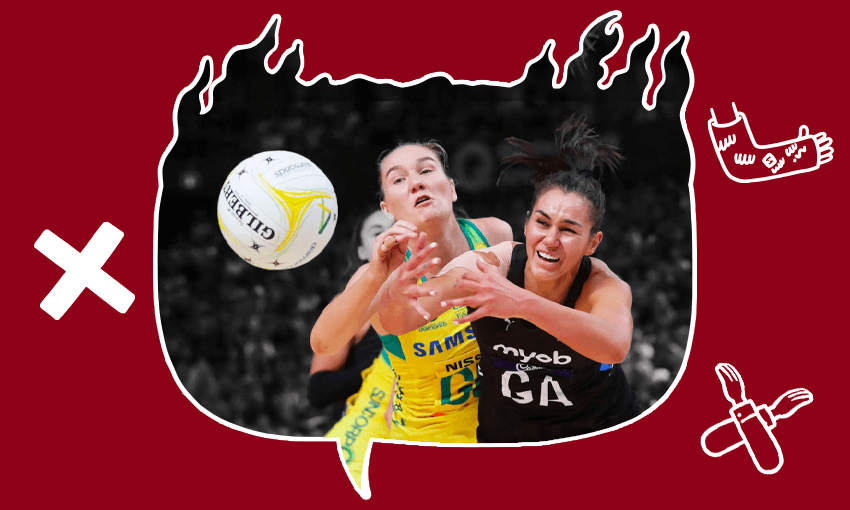 Hear me out: Netball has become too physical

Today’s elite players are fitter, faster and stronger than ever before – but their athleticism is starting to overshadow the game’s true magic, writes Reweti Kohere.

Contrary to popular belief, nowhere in netball’s official rulebook do the words “non-contact sport” appear. Instead, the rules allow some physicality provided players don’t try to gain an unfair advantage when contesting the ball. Such interference – including but not limited to pushing, tripping, holding or leaning – is deemed contact and is illegal within the sport.

You’d be forgiven for thinking the opposite is true if you’ve caught a glimpse of the ads on Sky Sport, social media marketing or games broadcast in your local pub recently. Today’s game is a frenetic spectacle of skill, vision and fortitude. I’m a lifelong netball fan, having played it since childhood when I was the only boy on the netball courts on Saturday mornings at Laird Park in Whanganui (I wore shorts but reckon I would’ve rocked a Westmere Primary School blue skirt). In victory and defeat, I’ve watched hundreds of women wear “the black dress”. I’ve witnessed some of the all-time international greats – Laura Langman, Liz Ellis and Serena Guthrie, for example – dominate. And, like every other fan, I’m wondering if Dame Noeline Taurua’s Silver Ferns can win Commonwealth Games gold in Birmingham next month. In Dame Noels we trust.

So what I’m about to say, I don’t say flippantly – there is too much contact in netball these days.

Contests for the ball between two players are jaw-dropping and jarring. Our top netballers have become fitter, faster and stronger, resulting in nearly every ball being up for grabs, every play challenged and every goal potentially denied. Players often hit the floorboards, and it’s comical too when the footage is compiled – just ask NSW Swifts co-captain Maddy Proud.

But it’s never fun watching athletes crumpled in a heap, crying in pain, clutching their ankle or anterior cruciate ligament after a freak accident or a collision with another player. Elite netballers get injured more than their recreational counterparts, and contact with another player or the ball is a common cause of injury, according to a 2021 review of nearly 35 years of scientific studies. One analysis found that netball had 3.3 times more severe injuries compared with basketball, which shouldn’t be the case – contact is part and parcel of playing basketball and therefore is part of learning the game from a young age.

Elite netballers handle the physical demands by being match-fit, but that doesn’t reduce the hazard of being slammed into a goal post by a defender who’s only trying to protect the space – or halt a well-timed drive. Just ask Melbourne Vixens goal attack Kiera Austin.

Keira Austin collides with the post and it is not pretty 😬

The sport constantly walks a fine line between being an entertaining display of players jostling for dominance and a slogfest that’s draining to watch. Umpires help keep players on that line, but it’s not uncommon these days for officials to blow their whistles nearly 100 times each game for contact infringements. It’s no longer surprising to see them issue cautions and warnings for persistent infringing or dangerous play – or actually send players off the court.

It caught my eye recently to read that referees in Australia’s domestic league, which typically allows more contests, were reportedly asked to blow the whistle more for contact, given international umpires are less tolerant of Australia’s “human backpack” style of play. Regardless, international tests between the top countries are and always will be brutal – the Australian Diamonds, the English Roses, Jamaica’s Sunshine Girls and South Africa’s Proteas give the Silver Ferns as much as they get.

Ideally, it should take attacking players two passes to move the ball from the centre circle, where play starts, to the goal shooters, where play ends. When those first and second phases of play are executed perfectly, you suddenly realise no one was called for contact because the speed and timing of the ball nullified any need for a contest. That’s netball at its finest – strong drives into space and pinpoint, quick passing resulting in a coordinated attack lasting no more than seven seconds.

Some 20 million people in over 80 countries, most of which are Commonwealth nations, play netball. And when Brisbane hosts the 2032 summer Olympics, millions more could witness the best of the sport if it’s featured for the first time. Netball has changed so much in 20 years – and the sport is nowhere near done evolving. I’d just mourn the day when 14 players are wearing helmets and protective padding.