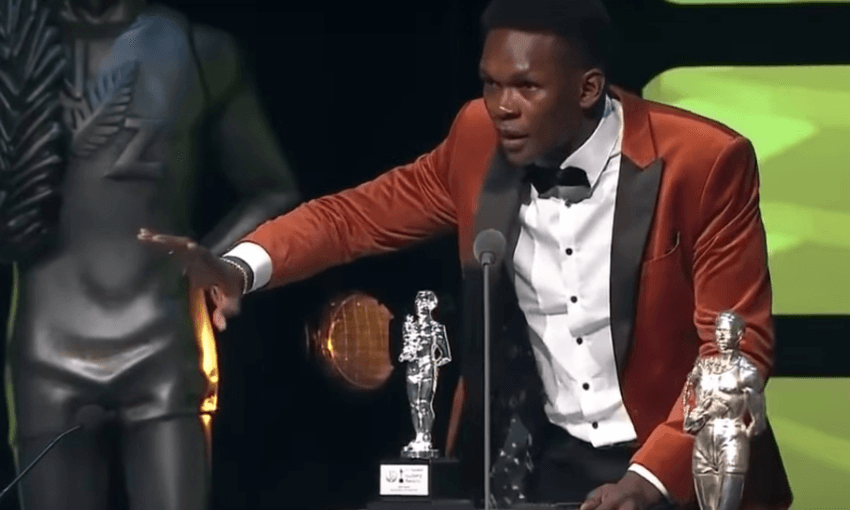 At the highest gathering place of New Zealand sport, UFC champion and sportsman of the year Israel Adesanya delivered the message he has long been destined to give, writes Scotty Stevenson.

I met Don Rowe in a Hamilton toilet. At the time I was editing a sports magazine and he was a pending graduate of the Wintec journalism school. He was a pugnacious little fucker, all fast twitch fibres on a wiry frame that had endured too many years of too few calories. He introduced himself and proceeded to tell me the magazine I edited did a terrible job at covering fight sports. He spat the words at me, while grinning. I told him to write me something. He did. It was the following month’s cover story. The title: The Dancing King.

I have never met Israel Adesanya, not even in a Hamilton toilet. I do remember the image chosen for Don Rowe’s November 2014 cover story on him though. Adesanya is flying out of the shadows, his ripped body lit to emphasise every muscle, his left arm and leg perfectly parallel, his right arm cocked to strike. He is flying out of the shadows, off the page, away from the forces of gravity. His shorts are emblazoned with the words “Black Murderers Row” (Who needs apostrophes in combat situations?) and every inch of him looks lethal. And then you see his face. It is devoid of emotion. It is stone cold focus.

Don wanted New Zealand to know about Adesanya, a kick boxer on the pathway to mixed martial arts glory. He was already the Stylebender, already building an MMA record that would ultimately see him signed by the UFC, already on his way to the top, already flying off pages and out of the shadows but, while there were clusters of MMA fans in New Zealand, there was scant coverage of the sport in the traditional media outlets. It’s fun to look at that cover now. The other stories: the 50th anniversary of Sir Peter Snell’s Olympic double, the return of Sonny Bill Williams to the All Blacks, and “Ten reasons we still love Richie McCaw.”

Snell, McCaw, SBW, Adesanya. One of those things was not like the others.

Last night, that became even more abundantly clear as the 30-year old UFC middleweight champion accepted his award for New Zealand Sportsman of the Year, and set about completely melting the brains of New Zealand’s sports establishment with the best acceptance speech in Halberg Awards history.

Why the best? Because it was so authentic it made sitting through the cavalcade of fawning bullshit worthwhile. Saying ‘fuck’ wasn’t the shock, although it would have been met by the kind of tsk tsking you’d expect from certain quarters. No, what really mattered was the honesty. Award nights by nature are a time for letting bygones be bygones, accentuating the positive, being all upbeat and grateful for the recognition. Adesanya reckoned otherwise and ripped the room a new one. My face hurt from smiling so much. It reminded me of the time former ASB CEO Barbara Chapman eviscerated the egos of a bunch of blokes at the New Zealand Rugby Awards.

“When you see one of us rising, you want to tear him down because you feel inadequate and you want to call it humble,” he said. It was an outsider’s view on the ultimate sporting insider’s night. He delivered that line like a kid who had been transplanted in a foreign land, bullied at school and found his meaning in making an impact with his fists and feet. He won the night by knockout. “Understand this.”

There was more of course: the shout outs to fighters past, the hard sell on combat sports, the acknowledgement of his coach Eugene Bareman, who was also nominated for an award ultimately won by the impressive Dame Noeline Taurua, herself a standout for being about the only person in netball to front foot and extinguish the flames of Folau that threatened to engulf her team. Adesanya then gave himself a shout out for wearing mustard, which was a line of such sublime comedic timing that it probably went over the heads of those in the room who were still coming to terms with the fact that a grown man said ‘fuck’.

The awards felt energised afterward. Some guests even woke up. Sky TV CEO Martin Stewart got so excited he tweeted the supreme award winner (the Silver Ferns) before the award was even announced on the live broadcast. It’s a digital world, after all.

Kudos to the Ferns. Great story and all. Their night, really. But the one person we’re all talking about today is Israel Adesanya, the Dancing King, the Stylebender, the truth-spitting prince of mustard. We’re talking about him in the streets and in the offices; in the pubs and living rooms; in the papers and online. Somewhere in a toilet in Hamilton, they’re probably talking about him, too.