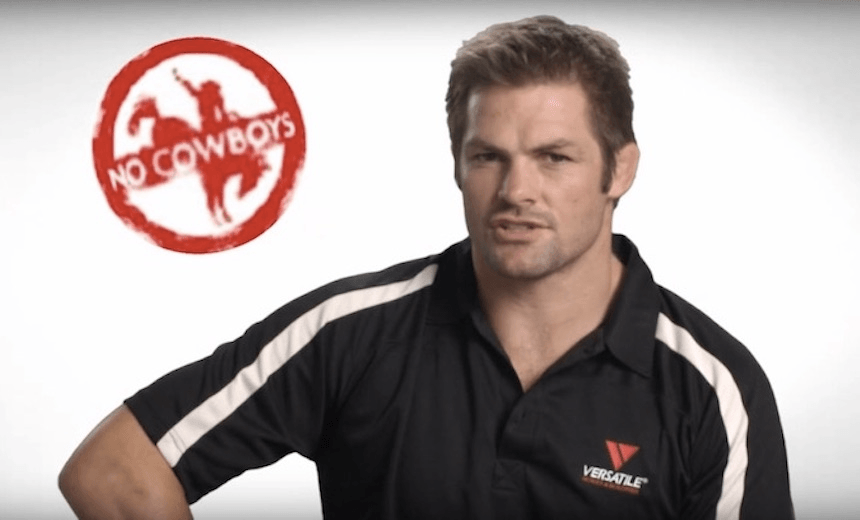 Salesman of the Century: The stellar ads that helped make Richie McCaw our New Zealander of the Year

The All Blacks great is more than just a Versatile home owner – he’s a surprisingly versatile actor.

Richie McCaw was named New Zealander of the Year last night. Some people are angry. They say setting about every All Blacks record, winning two World Cups, and retiring the greatest rugby player of all time isn’t enough to earn you a bank-sponsored award at a Wednesday night Langham booze-up. But with all respect to the guy who founded The Warehouse, McCaw absolutely deserves his place among the past winners of this prestigious award. People forget he is more than a great rugby player-turned-helicopter pilot: McCaw is also one of the finest actors of his generation; a cultural icon who has helped shape the identity of our small island nation in some the most epic ads made south of Hollywood.

Look at our great captain’s oeuvre. His latest campaign for Westpac is one of his most ambitious projects yet: an arthouse meditation about the value of getting on with it. The 60-second ad includes several key themes which run through his body of advertising work – hard yakka, the great outdoors, and going for a run, among others.

Despite his signature themes, McCaw is far from a one-note wonder. In fact, from his brooding Beats by Dre performance to his friendly and informative work as an ambassador for kitset building company Versatile – not to mention his comic turns for Mastercard – he has exhibited a remarkable range for an actor with no formal training.

Here are the 148-test All Black’s television ad appearances ranked from least to most culturally important.

This 2011 Sealegs commercial featured push-ups – a McCaw ad staple, and bonus points for them being on the beach – and put him at the wheel of a fancy boat, but lack of any speaking part prevented him from demonstrating his true range. A minor work.

The All Blacks’ loyal kit manufacturers gave McCaw his first known taste of the advertising limelight back in 2007, when he and some other All Blacks drew stickmen doing the haka on a pane of glass for the Impossible is Nothing campaign. From the same era, the Of This Earth campaign was the first to include a now-trademark jogging scene. Contrast these stoic, expressionless performances with 2015’s Force of Black campaign to see just how far he progressed. Despite his remarkable improvement in acting range, McCaw remained somewhat typecast in adidas ads. As a result they rank among his lesser works.

Weetbix were perhaps the first advertisers to tell the All Blacks hero: “be yourself”. Easier said than done, but McCaw rose to the task for this 2011 ad with Sonny Bill Williams. Although he doesn’t have a speaking part, McCaw’s presence and easy charisma speaks for itself.

The first ad of McCaw’s post-All Blacks career may be his most artful and profound work, using extreme exercise as a kind of metaphor for saddling yourself with backbreaking debt. But beneath the flashy surface it mostly just retreads the themes of his earlier work. Hard slog, jogging, sweat… We’ve seen these all before.

While not an ad in the strictest sense of the word, Air New Zealand’s 2011 All Blacks safety video was a landmark moment, McCaw’s first real opportunity to branch out into a more lighthearted role. He delivers a highly competent piece-to-camera from the cockpit, but the highlight is the subtle glance he shoots the flight attendant at 0:59 – that’s pure acting.

In 2015 the All Blacks again appeared in an Air New Zealand safety video, but McCaw – by then a recognised talent with nothing left to prove – made only a brief cameo appearance.

Like De Niro in Meet the Fockers, McCaw’s appearances in the All Blacks’ popular Mastercard ads revealed an unexpectedly strong comedic side to an actor better known for his serious work. In early ads he played a bemused foil to the All Blacks’ number one fan Tim, but as the series developed the pair established a firm friendship. In what may turn out to be their final Mastercard ad the pair share some heartwarming moments together – perhaps none more so than the classic haircut scene.

Richie McCaw’s advertising career masterpiece. The 2015 Beats by Dre ad is the single best showcase of his talent spectrum, tying together strands from across his oeuvre – enjoying a cup of coffee, slow-motion jogging in beautiful rugged scenery, putting in hard yards on the training paddock – into a visually arresting 3-and-a-half minute feature. That he does all this while wearing different models of Beats by Dre headphones just goes to show the full extent of his ability.

“That’s Versatile” goes the jingle at the end of every ad, and it could just as well be about McCaw’s acting as the kitset homes and garages he’s promoting. He started as a Versatile ambassador back in 2010 when he held the title ‘New home builder’, before graduating to ‘New Versatile home owner’ and finally just ‘Versatile home owner’. These ads are the perhaps the closest we’ll ever get to ‘the real Richie McCaw’, showcasing his signature off-field moves like sipping a cup of coffee and standing with his hands in his jean pockets. Their importance cannot be overstated.

This is our finest All Black. Our finest actor. Our New Zealander of the Year.