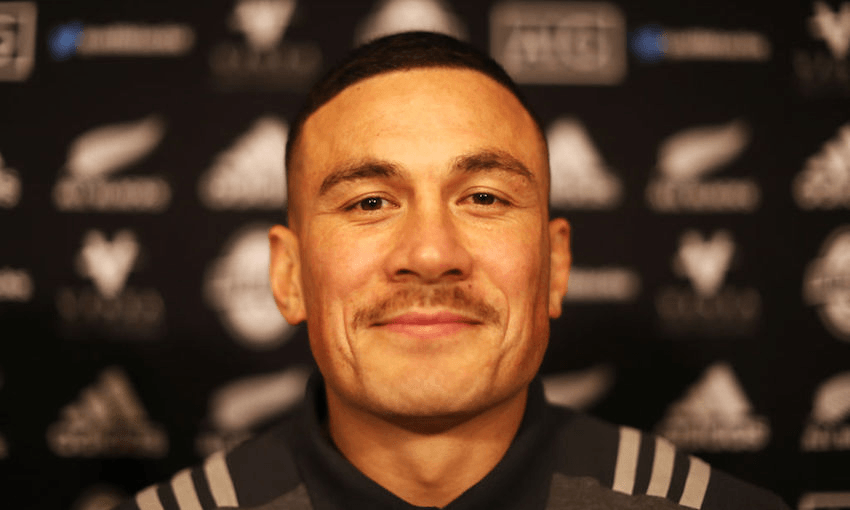 SBW: I love rugby – but there are far more important things in life

Is hype around the All Blacks out of all proportion in this country? Alex Braae went along to the first squad naming of the year to see just how big a deal it all is, and talk to a player with a unique perspective on it all.

About two dozen journalists attend a typical prime ministerial post-cabinet press conference. But rugby in New Zealand is a bit more important than that, and gets the media attention to match. For the first All Blacks squad naming ceremony of the season, at least twice as many people were there to see it.

Journalists, broadcasters, camera operators, media liaisons, techs, the aptly named Grand Tearoom at the Heritage hotel was swarming before the players and coaches even turned up. Sky TV was going to go live with the squad naming – in the past various radio stations have taken it live too. A nation awaited. Soon, they would know the names of the men who would do battle against France – a clash that has in the past been sold through the bombing of the Rainbow Warrior.

The coaches, in immaculate suits, strode into the room with purpose and immediately all the journalists were in the chairs. An expectant hush hung in the air – almost as if a conductor was about to lead an orchestra through an opera.

But when chairman Brent Impey opened his mouth, it wasn’t to sing, but to intone in a stern, clear voice the names of those who had been anointed. And when he finished, he handed over to head coach Steve Hansen to take questions, after first commiserating with those who hadn’t been selected in a funereal tone.

Reporters patiently waited to respectfully ask their questions, rather than the wild free for all of political standups. And as it was my first time attending such an event, I had been warned beforehand to take it very seriously. “A couple of muppets went along and took the piss mightily thinking they were being funny, fucked off the ABs and other media, and were banned next time they showed up,” said a former colleague. Suffice to say, I took his advice. And it’s fair enough for the regular rugby media to not want people to screw up their day jobs, because after all, All Blacks stories almost always out-rate everything else by a country mile.

Steve Hansen may have smiled once during the question and answer section – I was watching him fairly closely and didn’t see any, but may have looked away at the crucial moment. At the end, the writers stood deep in thought, absorbing the revelations, while the TV and radio journalists started getting set up for their standups and one on one interviews. That’s when the players themselves started getting amongst. A few debutantes, a few old hands, and all seemingly the most relaxed people in the room.

And of those players, by far the loosest in the shoulders was Sonny Bill Williams. He who has weathered unimaginably intense media shitstorms in multiple countries and multiple codes, been hailed as a genius, damned as a traitor, and everything in between. If anyone could put this all in perspective, surely it would be him. I got in the line for a few minutes one on one.

It’s not too difficult to keep training while you’re doing it?

Ah, it’s been tough. Not eating or drinking and you’ve got to train pretty strenuously, so it is going to be tough. In previous years I’ve done it where it’s just been, just about getting through it. I’ve seen it as a bit of a hassle. But this year I’ve really tried to take the mindset of fasting in the stomach, but feeding my soul. So that’s my buzz at the moment.

So, this is actually my first squad naming announcement, and it’s a pretty serious business.

Oh yeah, did you forget to brush your hair this morning brother?

I just mean, does the seriousness of these sort of situations ever get to you at all?

Not at this age bro, no.

When you were younger?

Yeah of course, obviously. It’s intimidating coming into this room and seeing so much media, the coaches, players you’ve only seen on TV or played against briefly. But, at this stage I try to take the emotion out, see it how it is and just be grateful to still be playing for the All Blacks.

Do you ever feel like the seriousness of these sort of things is out of proportion at all?

Oh, I think rugby in general in New Zealand is out of proportion. There are a lot of more important things in the world going on. But, it’s our national game and it is what it is. For myself, I see it as a blessing that rugby’s part of my life. It doesn’t define me, I don’t get my masculinity from being a good rugby player. I get it from being a good person, a good man, a good husband, a good father. That’s my mindset now.

But in saying that, I’m fortunate to get paid well to play for the All Blacks, and do what I love. The flipside is that I’ve got family members that are labourers for a living, you know? Living paycheque to paycheque. I’ve been brought up in Housing Commission houses, no wallpaper on the house, so I understand that. And I think it just comes from experience and age, that you understand that rugby’s not the be all and end all.

Right, so what keeps you going then? I’m not saying retirement, but…

Well I am 32 so it’s a legitimate question. But I’m still loving what I’m doing, the candle is still burning, I’m signed to New Zealand for another year next year, and whatever happens after that happens. But I’m just enjoying the ride, trying to make it a meaningful existence, and it was a good point you touched on before about how serious this occasion this is. You’ll have seen other things that you take more seriously than this, so I think just understanding that’s what life is about.

It’s just finding what your journey is, and what is meaningful, and that’s the buzz I’m on. But let’s not get it twisted bro, it’s an honour to be in the All Blacks, and it’s a privilege to be here. I’m just looking forward to meeting the new boys and hearing their journeys.

So with that in mind, are there any of those new players that really stand out for you?

Jordan Taufua, I’ve played with him a couple of times back with Counties. If you ever do an interview with him ask him about his pre-match warmup, it’s legendary. He almost has a game before the game starts. It’ll be interesting to see how he goes, because he’s a good man.