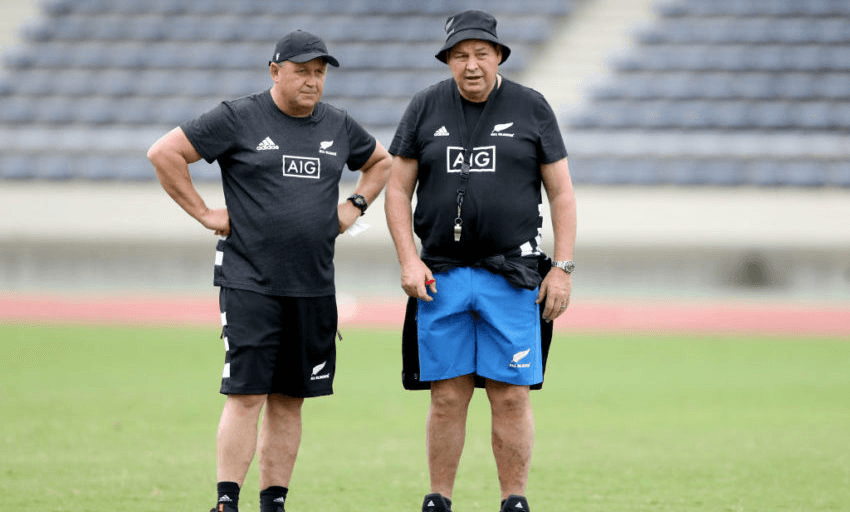 Ian Foster and Steve Hansen at an All Blacks training session in Japan. (Photo by Hannah Peters/Getty Images)

Ian Foster and Steve Hansen at an All Blacks training session in Japan. (Photo by Hannah Peters/Getty Images)

For an awful lot of 2019, I was one of the select few that sat in a room with Steve Hansen several times a week. There’s something pretty awe-inspiring about having that much to do with the man who has one of the most important jobs in the country, at least at first. There was a  rhythm to his press conferences: some dry humour, a lot of deflection, occasionally some deep dives into his own philosophical thoughts; but for the most part it was rugby talk that he’d distilled down to what he knew would make favourable headlines.

Hansen is a smart bloke. He knew how to manipulate a room full of journalists. But there was one issue he’d never be drawn on – so it was almost never brought up. That was who would take over from him after the ultimately doomed World Cup campaign.

He kept up the rhetoric even in the smouldering aftermath of the semifinal loss to England. However, like a lot of things with the All Blacks, you didn’t need to actually ask to get a pretty strong impression what the truth was. The man who sat so diligently to his right at every post match press conference, Ian Foster, was being groomed from a couple of years back to slide seamlessly into the role, just as Hansen had done in 2012 when Sir Graham Henry called it a day.

The only other logical challenger for the most part was the fresh faced Scott Robertson, who has breakdanced his way into contention with three consecutive Super Rugby titles. The equation seemed pretty simple: if the All Blacks win the World Cup, the job will be Foster’s. If not, it’ll be Robertson. Two former players with strong ties to their provinces and good reputations among the media.

That, in itself, was an intriguing enough storyline for rugby fans. Except for some unknown reason, NZ Rugby decided a fortnight ago to say that they’d shoulder-tapped 26 coaches to apply. This made absolutely no freaking sense, because you could rule out about 20 straight off the bat. They have no right to even be in the discussion for an All Black head coaching job, then most of the rest said nah anyway.

Warren Gatland said no, because of course he would – he’s signed to coach the British & Irish Lions in 2021. Jamie Joseph said no, too; he’s happy to stay in Japan where he can exercise his seemingly imperial power over their domestic competition in order to benefit the national side. Then, the latest and probably most cutting development, Dave Rennie has decided that coaching the Wallabies is a more attractive option. Read that last part slowly, because it’s true, then feel free to put your head in your hands. All three, especially Rennie, can now walk with a little more swagger in their step because they can boast that they’ve turned the All Blacks down.

How on earth did it come to this? Why did NZ Rugby make such a big deal about the amount of talent they were inspecting, when they’ve been so late in getting their invites out that now they’re not going to have anyone show up to their party? The three aforementioned coaches would have had those deals on the table months ago, and in Gatland’s case it was public knowledge that he’d signed his before the World Cup had even started.

If nothing else, it reeks of arrogance that they’d think that way. While there is some truth in the lure of the black jersey keeping players here in New Zealand (for now, anyway), a very high priority for a pro coach is a pay cheque and security. Plus, they don’t have such a finite window on which to cash in on their talent. The All Blacks should have been on the case to figure out who would take Hansen’s spot ages ago, not just before Christmas.

Unless, of course, they already have. The key clue in this theory is Tony Brown, the former Otago stalwart who has just tied his colours to Joseph’s mast in Japan. He was also linked to Robertson’s coaching set up for when he applied, which was a little sneaky on his part, but for him then to turn down even going for the All Black assistant job could be seen to suggest that he knows he was never going to get it. So that would rule out both Joseph and Robertson.

Which only leaves Foster, who would be the last man standing among what would seem to be a formidable list of competitors, had a serious game really been played. He’s the guy they wanted, because for them it’s just a change of shift in the top job. Perhaps this is NZ Rugby’s way of showing they’ve done their due diligence, but for them it’s turned out to be embarrassingly hamfisted and obvious.

In the scale of rugby-punching-itself-in-the-dick moments, this one is relatively minor. But given the game’s rather precarious position right now, it’s another one it definitely doesn’t need.