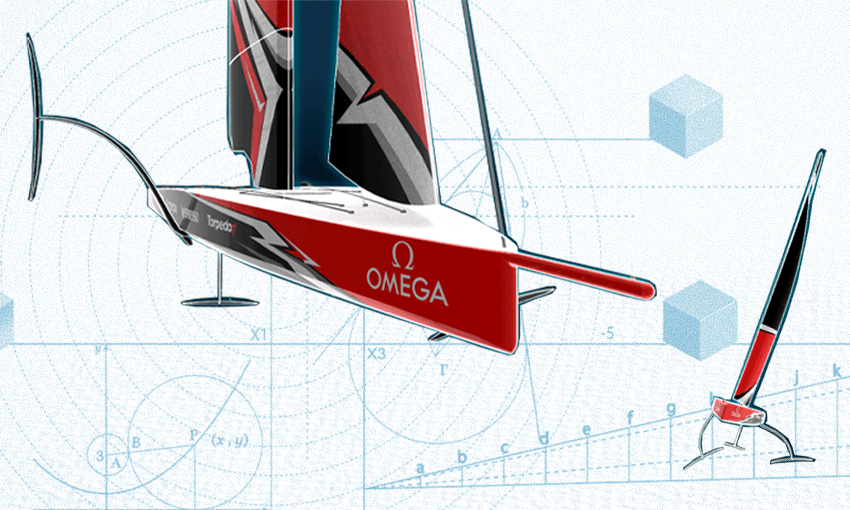 New to sailing? As the Prada Cup resumes, here’s how to talk like a pro.

When I was 10, my mum made my brother and me join the local sailing club. It was a favourite pastime of families in Kerikeri, and my brother was actually quite good. I lasted only a few weeks before being hit in the head by the swinging boom of a vessel I wasn’t even on, and thus my career on the seas was finished.

If splitting my eyebrow open on a flailing wooden pole wasn’t enough, on September 25, 2013, the part of my heart that still held some love for the sport, shattered. On that windy day in San Francisco Bay, Emirates Team New Zealand and Oracle Team USA embarked on a winner-takes-all final race for the America’s Cup. New Zealanders watching via early morning television held their breath.

We needed nine race wins to bring the Cup home – we had eight, Team USA had one. Then by some miracle (or more likely expensive sailing technology), we lost eight races in a row and grasped defeat from the jaws of victory.

In 2017 Team New Zealand challenged again, but still hurting from four years beforehand, I didn’t watch it. We won. Now, four years later, the race is on again and this time it’s a home game for New Zealand.

In order to once again join in on the spirit of sailing, and so you don’t have to, I’ve done some research to bring you an easy-to-use guide to the basics of yacht racing.

Has the America’s Cup started yet?

Strictly speaking, no. The races that are happening currently are part of what’s now called the Prada Cup. These races involve all of the America’s Cup challengers, bar the team defending their America’s Cup victory. In this case that team is Emirates Team New Zealand.

So what is the Prada Cup?

The Prada Cup is a separate competition, the winner of which will advance to take on Team NZ for the America’s Cup. It used to be named after another humble clothing firm: The Louis Vuitton Cup.

Who are the competitors for the Prada Cup?

Nearly. In a dramatic capsize on Sunday, the boat, helmed by New Zealander Dean Barker sustained a hole in the hull and damage to equipment. They’ve now abandoned the round-robin and are aiming to return to action in the semi-final.

When are the semi-finals?

The semi-finals run January 29 to February 2. First to four wins goes through.

And the America’s Cup itself?

On March 6 Emirates Team New Zealand will meet its yet-to-be-decided rival in the first race of the America’s Cup. Again, it’s best of 13, so first to seven wins will be crowned the winner.

OK, let’s get out on the water. Port and starboard. Which is which?

Port refers to the left side of the boat, starboard the right. It’s not quite the same as the left and right we use in everyday life, because it’s relative to the boat, not the person.

What happens when the boats are on a collision course?

Just like in driving, there will always be one boat with the right of way. The other boat will have to either slow down or move aside to let them pass.

If the boats are close and begin to tack towards each other, the boat tacking starboard – meaning turning so that the wind is hitting its starboard side – has the right of way.

Tacking is what yachts do to create speed. Basically it’s when they turn to catch the wind in their sails. A boat will tack when they are heading upwind. When they’re going downwind, it will gybe. The basic difference is a tack is turning the boat from the bow, or front, and a gybe is turning the boat from the stern, or back. Unlike a running race, the boats won’t just sail in a straight line for their target, tacking and gybing is what builds speed.

Team USA capsized when they tried to tack and then gybe around the mark on Sunday, that’s a tricky manoeuvre.

What if they’re not tacking towards each other, but they’re still in each other’s way?

If one boat is clear of the other without overlap, that is the boat with right of way. If there is overlap, the boat that’s pulling up the rear has right of way. The leading boat then has to get out of its path.

Is there any offside?

Yes! The ocean might be gigantic, but there are boundaries for these races. The racecourse is about 3km long and 900m-1.5km wide. The only reason the above right-of-way rule wouldn’t apply would be if a boat with right of way was about to force its opponent over the boundary line.

What happens when a penalty is awarded?

The umpires will signal to the team who has infringed that they have been awarded a penalty. This team must then pump the brakes until they are 50m behind the other boat, then they may carry racing.

It was clear Luna Rossa were going to win when I realised how far ahead they were after crossing the windward/leeward gate on the final lap.

And then it’s over?

Not yet. The race director gets to set the number of laps in each race based on the amount of wind there is. The boats go up and down between the gates and around the marks until they’ve completed all set laps. The race is over when the boats complete their final loop around the windward gate and head back downwind, crossing the finish line.

Is there any other terminology I should know?

Apart from port and starboard, leeward and windward, and tacking and gybing, there are a couple of other words you might hear being thrown around.

OCS – This stands for on course side, and basically means one of the boats made a false start. As they don’t start from a standstill the teams have to get their timing just right to cross the start line as soon as the race begins, but it’s not easy to pump the breaks if they’ve mistimed it.

It’s so disappointing that Team USA were penalised for starting OCS!

Foils – These are the legs that stick out the bottom of the boats, and help to keep the boats upright when they reach high speeds. If a boat “foils” that means it’s raised out of the water and balancing on these foils. When a boat foils it can manage faster speeds as there’s less drag from the water.

Team UK got on their foils quickly at the start of today’s race which gave them a huge advantage.

Great, where can I watch it?

The races are all being broadcast live on TVNZ and TVNZ On Demand, and if you’re in Auckland you can head down to the waterfront in the city to catch some of the races in person.

How a group of mates in a caravan changed NZ sport forever.
By Duncan Greive
CEO / Publisher