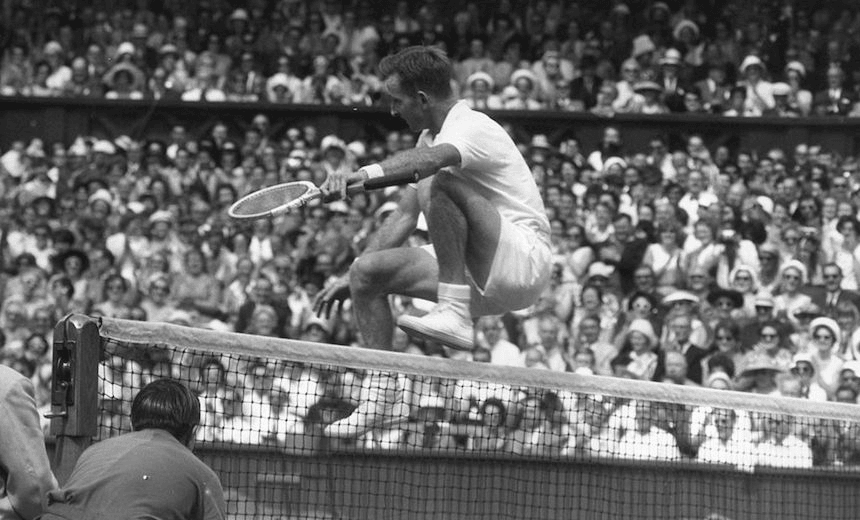 Arguing With My Dad: Who is the greatest tennis player ever?

Arguing With My Dad is an occasional column which features Greg Bruce in conversation with his father about sports. In this instalment, a disagreement over tennis becomes a discourse on the nature of debate itself.

Dad and I have never argued about tennis in our lives, and in fact we’ve hardly ever talked about it, but since my role here is simply as archivist of the insane, I wasn’t going to stop him when the conversation took a tennis-related turn.

The stakes couldn’t have been lower. I have struggled to care about tennis since the end of Federer’s golden age. His long, ongoing unseating by the grafter Djokovic feels to me like an endless grief. I had been through earlier stints of enjoying tennis – Agassi and Hingis, and Brett Steven in his prime – but the only match I’ve watched in the last couple of years was when Andy Murray won Wimbledon and I only watched the first couple of sets, my interest in history-in-the-making waning with every passing point, until I fell asleep in front of the TV.

Anyway, Dad called up and asked who I thought was the best player of all time and I said – as neutrally as possible because I had an idea where this might be going – Roger Federer. He told me that I was wrong and the correct answer was Rod Laver.

His phone call came half an hour before my bed time, so I wasn’t in the mood. He had begun the call by discussing plans for his weekend visit to see his grandchildren and all had been pleasant enough. Then, from nowhere, he had turned to tennis. I was not prepared.

“I thought I’d just throw that one at you,” he said, “and see how you responded.”

“So what was your argument?” I asked. “That Laver would have won more grand slams than Federer but he couldn’t enter a lot of tournaments?

“He couldn’t,” Dad said, his voice rich and belligerent with the joy of the anticipation and cultivation of the coming conflict. “Because he was professional and the grand slam tournaments, back in those days when he turned professional, he wasn’t able to enter them.”

He went on, because apparently it wasn’t yet time to let me talk.

“Have a look at his record anyway and I think, well I don’t think, I know you’ll find I’m right, that he’s been the greatest player in the world and you’re up the creek without a paddle with your nomination.”

“Where has this even come from?” I asked.

“It’s come from leftfield,” he replied. “I was just reading through your previous columns about arguments with my dad and thinking, ‘well I’ve not been given a fair go in those columns so let’s bring this one up and see whether the truth is reported this time.’”

I asked if he had considered subjects other than tennis.

“No, of course not,” he snapped. I don’t know why he snapped. The question seemed legitimate. I stayed calm though, because I knew that was not what he wanted.

I pointed out the flaw in his argument: that he had asked me who I thought was the world’s best player and I had said Federer, and it was he who had then disagreed with me.

He claimed again that I was the one who had disagreed – a claim audio recordings refute – then he backtracked: “If I’d started off by telling you who I thought was the greatest player you may have agreed with me – no you wouldn’t have, no – but I put it the way I did because I knew who you would quote.”

“If you knew who I would quote,” I said, “you were deliberately targeting a disagreement.”

“How is that rubbish? That’s exactly what happened.”

We both tried to speak over the top of each other a few times. Eventually, inevitably, I gave way.

“Have you got nothing better to do,” he said, “than to argue with me at 9 o’clock at night?”

Spurred by a mix of injustice and bafflement, my voice reached an extremely high pitch: “You’ve called me, you’ve been reading through these articles, you’ve thought ‘Oh, I’ll have an argument with Greg.’ You’ve called me, provoked an argument, told me that I’m the one that wanted to disagree with you even when you’re the one that disagreed with me and now you’re telling me I’ve got nothing better to do than to argue with you. This is some of the most outrageous…”

He cut me off: “I just called up to see if we might agree about something”, he said. I told him that that didn’t appear to be the case in this instance; nor did historical precedent support his claim.

“Greg,” he said, “When I asked you that question, if you had said Rod Laver, I’d have said, ‘Yes, Greg, I totally agree with you.’”

And so it was that a simple question about tennis had brought us to a place bulging with dishonesty and logical fallacies, in which the argument turned inexorably away from tennis – a subject about which neither of us much care – and toward the issue of which of us is most argumentative, a question that long time readers of this column will know to be rhetorical.

“Obviously,” he said, after a while, “If I want to talk about something harmonious I’ve got to choose another subject. That might be…. ahhhh….ahhh…”

After an extended period, he asked after my mother, from whom he has been separated for 24 years.