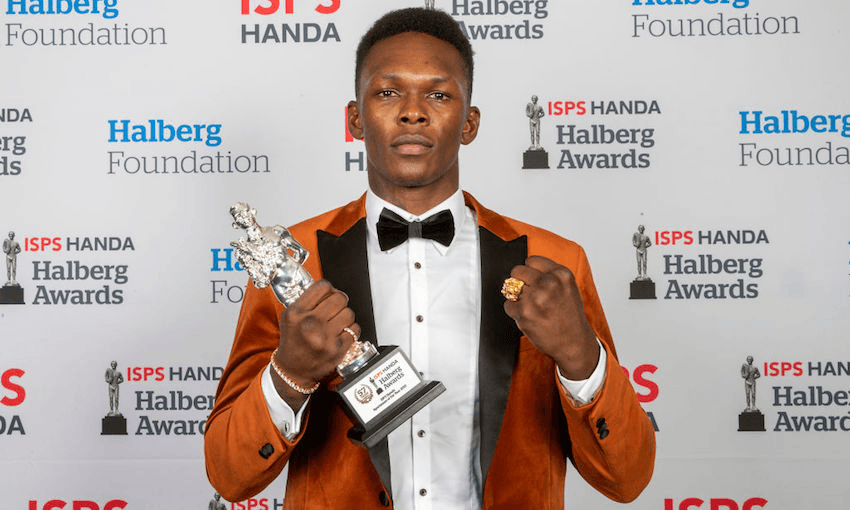 Israel Adesanya at the Halberg Awards on February 13, 2020 where he was named Sportsman of the Year. (Photo by Dave Rowland/Getty Images)

Fighting in the age of Covid, Israel Adesanya represents a new New Zealand

Israel Adesanya at the Halberg Awards on February 13, 2020 where he was named Sportsman of the Year. (Photo by Dave Rowland/Getty Images)

Israel Adesanya has fought his way to the top of his sport, and into the hearts and minds of New Zealanders – whether they want him there or not. What’s at stake when he fights this weekend in Abu Dhabi?

Just two years into his UFC career, mixed martial artist Israel Adesanya is a bonafide international superstar. The Nigerian-born Kiwi, who lives and trains in Auckland, has gone from a brash but unknown cage fighter to potentially New Zealand’s most renowned and winning sportsperson. With more than 100 professional fights and an undefeated mixed martial arts record, the undefeated, undisputed champion is unapologetically in his fighting prime.

We first met in 2014. Adesanya, fresh from the kickboxing circuit in China, was living on a mattress on the floor of an Auckland flat with his dog Millionaire. Today he’s the face of Puma, rubs shoulders with Emirati princes, and stands staunch on the cover of EA’s latest UFC video game. Earlier this year Adesanya stormed the Halberg Awards, taking out the top sportsman of the year, and issuing a challenge to the whitebread, banal and flaccid world of mainstream New Zealand sport.

He’s on the cover of Metro, co-hosting The Project, driving a McLaren, brought up on stage by Six60 and trending on Twitter every time he so much as sneezes. In a few short years Adesanya has eclipsed the profile of David Tua and Joseph Parker a hundred times over. David Higgins would cut off his left nut to get half the press coverage Adesanya does on an average Sunday.

As rapper Mazbou Q wrote following Adesanya’s championship win last year, he is also the face of the Afro-Kiwi diaspora. He has balanced the academic expectations familiar to anyone with immigrant parents with a bloody determination to shine on his own terms. He has navigated a New Zealand unsympathetic to brash young men of colour and emerged with the unshakable confidence required to step, time and time again, into a locked cage with another trained man. He has spoken out against racism in New Zealand in the vein of Taika Waititi – and received the same response. His appearance speaking at the Black Lives Matter protest in Aotea Square was greeted with equal parts adoration and derision. But Adesanya remains emblematic of a new New Zealand; young, bold, diverse – and proud of it.

Since February, 2018, Adesanya has fought and amassed a perfect 8-0 record in the UFC, the world’s leading professional MMA organisation. His prize winnings are in the high seven figures. His fights have become must-see viewing, irresistible to New Zealand media outlets who have traditionally refused to cover martial arts success, and in all that time he has barely lost a round. It’s a rise comparable only with – and in my opinion superior to – Irish superstar Conor McGregor, only without the racism, embarrassing losses or allegations of drug and sexual abuse.

This weekend he fights Brazilian Paulo Costa, an absurdly muscular once-in-a-million athlete – the sort of guy that would make a superhero blush. Costa is a brutish anomaly in a sport of freaks, with Ricky Martin’s face, the body of a young Arnold and a perfect 13-0 record in the sport. The build-up has been a war of words which crosses the near-nonexistent line typical in fight sports: Costa, says Adesanya, is a blatant steroid cheat, a juiced up baboon, and dumb as a rock. The road to the fight has been rocky. Following Auckland’s second Covid-19 lockdown, the entire City Kickboxing team moved into a single bubble in their Eden Terrace gym, living on the mats shut off from the outside world for several weeks. Four athletes from City Kickboxing will compete this weekend. Historically, when fighting on the same event, they are a perfect 9-0.

The fight is expected to be close. Adesanya excels at a technical style of kickboxing, utilising footwork, distance control and supremely fluid techniques to break his opponent down. Costa fights like a car crash and has far less experience but a significant power advantage. The bookies lean towards an early knockout loss for Adesanya, or a late victory. For my money, Adesanya will claim his 100th professional victory and prove once again why he’s that rare transcendent athlete that only combat sports produce.

The pair will fight on Yas Island in Abu Dhabi. During the Covid-19 crisis, the UFC was one of the first major sports leagues to resume competition, mostly in the Middle East. Fighters endure strict quarantines ahead of their fights in an exclusive Las Vegas hotel commandeered by the organisation before shipping out. The fights take place in empty arenas. Numerous events have fallen over as a result of positive Covid tests. And, should the fighters make it to the event healthy, Adesanya will compete around 4am local time to accommodate the North American viewing audience.

The UFC’s ‘Fight Island’ is an opulent example of sportswashing – a multimillion dollar advertising campaign for a regime accused of numerous human rights violations and violent crackdowns on protest and free speech. This is nothing new – fight sports have been used in this manner since Mobutu Sese Seko bankrolled Ali v Foreman in the Rumble in the Jungle. The UFC proudly continues the tradition however, vocally campaigning for Trump’s reelection and turning a blind eye last week to white American Colby Covington accusing his African-American opponent of Marxist domestic terrorism for supporting the Black Lives Matter movement. In fact, Trump himself called to congratulate Covington after his victory for beating up an athlete with the temerity to bring politics into sport. However for prizefighters on the world stage, the UFC remains the only show in town.

And like Ali, it matters less who Adesanya fights for, and more what he does with the result. A win on Sunday will further cement Adesanya’s place atop the sporting pantheon in New Zealand. And proves yet again to a generation of Kiwis coming into their own that the days of the rugged Southern man are over, and success on their own terms is within their reach – no matter the obstacles, whether personal or political.