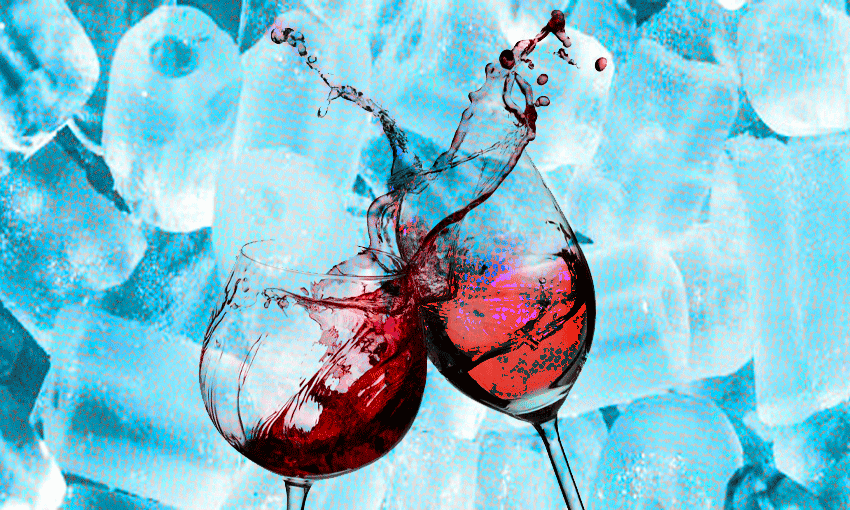 Is putting ice in red wine ever OK?

Summer read: Discovering that her favourite summer drink is apparently an offence against wine, Charlotte Muru-Lanning sets out to uncover whether it’s actually so awful to serve red wine on the rocks.

After many summers spent pouring red wine over ice without much thought, it recently struck me that maybe this combination was, in fact, the wrong way to drink red wine. I often wonder whether or not I’m living my life the right way, and in these times of uncertainty, I turn to Google for guidance.

“Should you put ice in red wine?” I typed into the search bar.

The answer: “Absolutely not.”

I’d suspected it wasn’t the best thing to be doing to my wine for a while, but I hadn’t guessed quite how much of a sin I was committing each time I tumbled a handful of ice into my glass of second-to-bottom-shelf red.

Nothing is particularly groundbreaking or purposeful about drinking red wine with ice. The reason I mix the two is simply that I more often than not have red wine on hand, and in summer I want a cold drink – so I add ice. As I see it, it’s pretty much just sangria or tinto de verano, but without most of their key ingredients. I know I’m not alone on this either, because plenty of others have raised the subject online, and also because actress Diane Keaton made her own brand of red wine that’s designed to be drunk with ice.

Wine buyer Mike Gibb is in charge of the wine selections at bar and eateries Celeste and East Street Hall, and wine store Star Superette. All are based around Auckland’s Karangahape Road and focus heavily on high-quality, natural wines.

Gibb says that people often drink a lot of reds too warm, and conversely, a lot of whites too cold. For many wines, being served at these temperatures means “the wine isn’t speaking as well as it can or could be”. It’s a misconception that’s hopefully on its way out, possibly helped along by new spots like those Gibb chooses wine for, where they serve wine at more suitable temperatures, including chilled reds.

Gibb notes that at East Street Hall, chilled reds have outperformed room-temperature reds since its opening last year. He’s interested to see whether that trend will hold up as we move into cooler months. Ultimately, though, he thinks cooled reds are on the rise.

When serving up chilled red wines, Gibb looks for wines that are light, fruity and less oaky, but adds, “I personally like a little bit of tannin which makes the wine really crunchy when you chill it down.” Think bright types like beaujolais or grenache.

An increase in wines being produced in styles suited to drinking at cooler temperatures has helped propel this shift, according to Gibb. There’s been a rise in organic, natural, early-drinking wines that taste fresher and have less oakiness. This doesn’t necessarily mean you should be putting cubes of ice in them though.

“Chilled reds are a yes for me, diluting red wine is a no for me,” says Gibb.

Get your hands off the ice cube tray. Step away from the freezer. When you put ice in red wine, as the ice undoubtedly melts, you’re diluting the wine. At the same time, you risk making your wine too cold, which could rob the wine of its aromas and flavours. This doesn’t matter so much with cheaper supermarket wines, says Gibb. But, when it comes to those more artisanal wines at higher price points, “winemakers and vineyard producers are putting a lot of effort into the wine in that bottle and manipulating it that way is probably not what they would want”.

“From a winemaker’s perspective, I would be pretty upset if someone was essentially adding water to my wine.”

So, instead of adding ice, Gibb suggests some less uncouth ways to cool down your red wine. The first requires some pre-planning, but is no doubt the easiest. It’s as easy as putting a bottle of red wine in the fridge. After around an hour, “take it out of the fridge and leave it for 20 minutes before you drink it, or pour a glass and leave it on the bench for a few minutes”.

The second way to cool down your wine is to pour it into a sturdy glass and sit it in an ice bath before decanting to your wine glass. This method will resonate with you if you’re keen on extra steps and the sound of clinking ice.

And if you’re adamant that you want to add ice, use big chunky ice cubes that melt slower, or some whiskey stones (these kind of freak me out, but it’s up to you). And remember, if you go too far and your wine gets too cold, you’re allowed to microwave it.

A very unscientific survey of my friends reflects what I suspected, that is, the majority of us are more likely to have a bottle of red on hand at home than any other colour of wine. There are plenty of reasons for this but one of the most apparent is that when you’re buying under $20 bottles of wine, cheap reds tend to be far more drinkable and comforting than cheap white wines. Chilling red wines, especially knowing how to do this properly without ruining your wine, is a very simple way to extend wines between seasons, and to make them even more useful. If you’re not doing this already, give it a go.

Enjoying eating and drinking should be about being able to appreciate as many things as possible, whether that’s a $54 bottle of natural tempranillo or a $13.99 pinot noir chilled in the fridge. Freshly made pasta or the dried kind; soft, white supermarket bread or kūmara sourdough; stock cubes or bone broth. All can be delicious. We run the risk of missing out on a lot of enjoyment when our palates become too refined. Ignorance, within reason, can be pretty delicious.

Lightforce is the country’s fastest-growing solar energy company and is on a mission to create a lighter, brighter future. Find out how going solar can help you save money and reduce your impact on the environment.
Opinion
8th August, 2022