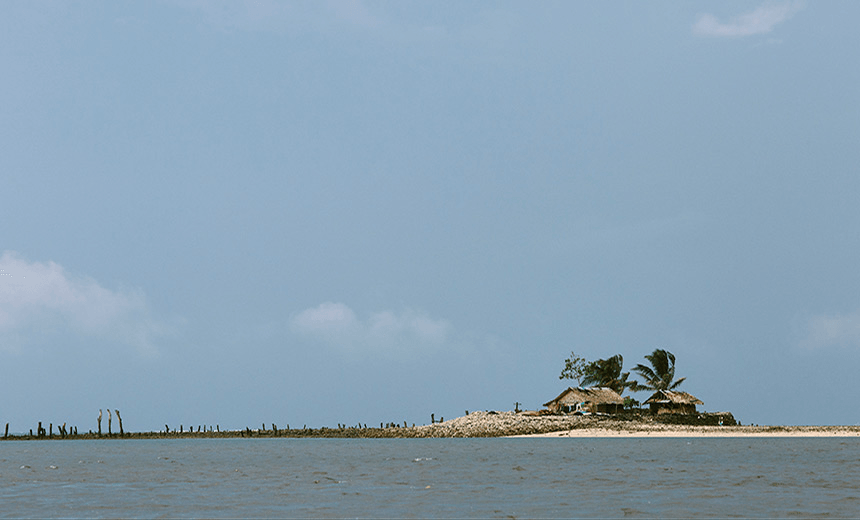 Climate change is harsh reality for the Pacific Islands. Madeleine Chapman travelled to the Solomon Islands with World Vision to meet the communities whose lives are already being upturned by climate change.

The skipper navigated our banana boat through wooden posts that shot out of the ocean like tombstones. Beyond them, on an island no wider than 50 metres, stood a lone house. The last home standing on the remains of a thriving village.

It rains a lot in Walande. It never used to, but now it’s rainy season for six months of the year on the group of small islands situated off the east coast of South Malaita island. The days we spent there were perpetually wet, small streams forming on the side of the walkway that cuts through the village of about 100 homes. In a cluster of small islands that, from above, look like sandy slices of paradise, Walande is distinctly grey and muddy, a low rocky cliff surrounding it.

The community’s near 500 residents were pushed onto this settlement after tidal waves destroyed their homes and forced the vast majority of them to migrate from Walande Island over the past 20 years. It’s now a community divided, with Walande Island their former home and Walande now referring to the mainland where most of the community have moved.

Andrew, the village chief, was one of the first to relocate after a king tide wiped out his home on Walande Island in 1995. “When we moved from that island,” he told me as we walked through the rain, “we slept in tents while we built our homes.” And impressive homes they are, built sturdy and high up on stilts to withstand the now frequent extreme weather. When I asked Andrew how long it took to build a new house from scratch, he calmly replied that it takes three weeks without rain. When I looked surprised, he laughed. “We have to build a lot of homes, we get good at it.”

The people of Walande have lived on this mainland before. Around the end of the Second World War, the tribe lived on two islands further out to sea. When sea levels started to rise and the islands became dangerous to live on they moved to the land they now inhabit. Except when they arrived in the 1940s, malaria was rife and the children were getting sick. They had to find somewhere else to go. So the villagers built a home out of the sea. They literally built an island 100 metres from the mainland to escape the forest breeding ground of the mosquitoes.

On that man-made island lived over 90 families, and frequent visitors during the holidays; Walande Island held infamous festivities over Christmas and Easter. But as ‘once in a century’ tidal waves began to regularly pound the island in the 1990s, row after row of homes were washed to sea and the island began to literally disappear. “There were 90 homes,” Andrew said, pointing out at the tiny island, “now there’s one.”

After 70 years of being home to a growing tribe, Walande Island is now home to just one family. When I asked about Timothy, who lives there with his grandchildren, Andrew expressed bafflement. “Most of us told him to move but he disobeyed us,” he said. “Many times I have told him to move but I don’t know what his reason is.”

He wasn’t the only one who questioned Timothy’s motives. Jennifer Mamae moved to the mainland even before Andrew in 1992; her family’s home was on the edge of Walande Island and the first to be damaged by the waves. “He has no reason to stay out there,” she said from the steps of her home, a small child on her lap, “he’s just stubborn.” Jennifer’s home, only the second built on the mainland, sits almost above the water on stilts.

The later you make the move to the mainland, the further inland you have to build your house. Living inland and further from the ocean is safer, but for a community who have lived all their lives by the sea, it’s considered a last resort. “We are water people,” she explained. “We swim, we fish, we bathe. Everything we do is with the water and we want to be close to it.” But even while saying that, she pointed across the path to a nearby house situated ever so slightly inland. “That’s our new home. We go there during the stormy weather.” The people of South Malaita know only a life lived by or on the sea. Unlike the coasts of Western countries where the wealthy pay millions to be close to the sea for the view, Solomon Islanders feel a very real connection to the ocean. It’s a relationship that simply can’t be dismissed with suggestions to just move further inland. I was coming to understand why Timothy and his family were still living Castaway-style on Walande Island.

The next morning at low tide, we hopped into our banana boat and our local chaperone rowed us through the boggy water the 100 metres to Walande Island to see Timothy and his family. We arrived and looked back to see a line of children seemingly walking on water towards us. At low tide the water goes so far out that the children simply walk along the sandbar connecting the two villages without getting their hair wet. With the tide out and more of the island’s skeleton revealed, it was almost possible to picture what Walande used to be. The remains of the village stretched out almost another 100 metres into the sea, a graveyard of homes. Six hours later and the only thing visible would be Timothy’s home and the growing rock wall surrounding it, which he adds to regularly to keep waves from entering his home.

Timothy was born on Walande Island 53 years ago, has lived there every year since, and, if it were up to him, he’d die there. The fact that his is the only family left is less due to force of will and more sheer luck that his parents unwittingly built their first home on the safest portion of the island. Timothy watched as families on the shore fled their homes, followed one by one as each house washed away until finally his last neighbours departed just a few years ago. He’s not alone, though. Timothy lives with his daughter-in-law and her four young children. The children attend school on the mainland and take their small canoe across every morning, while Timothy travels over to tend to his crops (it’s impossible to keep a garden on the island with all the salt water that runs through it every high tide).

As we went to board the canoe for our return to the mainland, I noticed a single solar panel lying haphazardly on the woven roof of Timothy’s house. It looked exactly like the ones used around New Zealand to power the electronic update boards at bus stops. Timothy said the government had supplied all the residents of South Malaita with solar panels and connected LED lights to replace the kerosene hurricane lamps they’d previously used. “They don’t work perfect in the rain but it’s enough for us.” It’s ironic. These families, their feet and canoes their modes of transport; their fishing nets and crops producing the majority of their diet; and their homes being washed away by rising sea levels, are operating entirely on solar power.

Timothy doesn’t see the irony. All he sees is the water rising every year and his rock wall – which he keeps building up – becoming incapable of keeping out the high tide. He knows he’ll have to move eventually but before he can do that he has to find supplies to build his new house on the mainland. And he’s in no rush to do either.

“If I move to the mainland I can’t see anything through the trees. I won’t even see the water. I want to have this spot where I can look around me. Because I’m part of this place.”