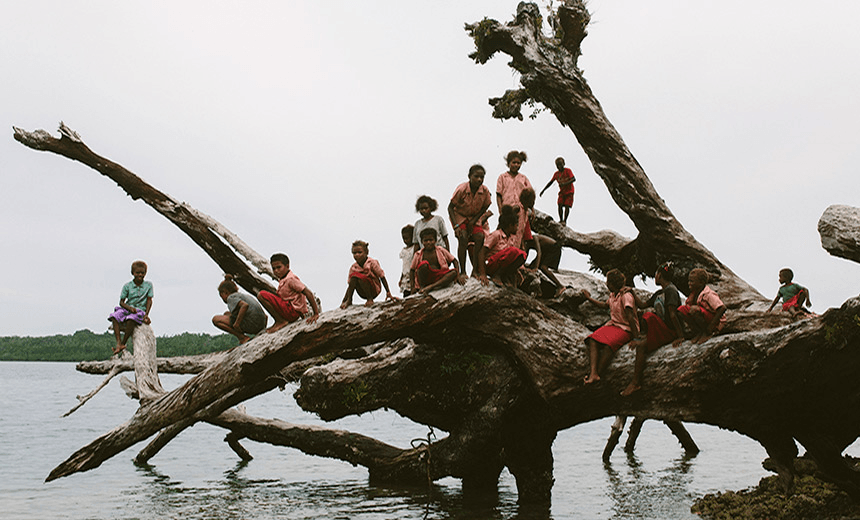 South Malaita is drowning. So who’s going to help them?

Climate change is a harsh reality for the Pacific Islands. Madeleine Chapman travelled to the Solomon Islands with World Vision to meet the communities whose lives are already being upturned by climate change.

With no electricity or cell service, let alone internet, it’s hardly surprising that most South Malaitans are unfamiliar with the term climate change, but they know their environment is transforming. For most of the villages their world does not extend far beyond their island. To them, the weather is changing and they have to adapt their way of life.

In 1922, when Stewart was ten years old, Fanalei Island, his home, was entirely self-sustaining. Half of the island was sown with plantations filled with taro, yam, potatoes. And the seas provided all the fish they could need. Things remained this way for most of his life.

But in the last 20 years, all the plantations have been wiped out by the frequent waves crashing over them, the salt ruining the top soil. Now where once there stood row after row of vegetation, there’s merely a swamp. A swamp that has grown with every high tide so that it now connects with the ocean to effectively halve the size of Fanalei Island.

With no soil safe from the sea water, residents of Fanalei including its chief, Stewart’s son Wilson, now plant their crops across the lagoon in Fouele, a community on the mainland populated by former residents of Fanalei. “Our crops here die every high tide,” he said, “we feel that we are losing our eco-system.” While the effects of climate change are now glaringly obvious, the community have been making plans to adapt for years. “For fifteen years we have tried to find someone to fund us so we can rebuild some of this island,” Wilson said, “but so far no response from the government.”

Ethel, or Aunt Ethel as she’s known to most on the island, is the unofficial leader of the Fanalei community. Aunt Ethel grew up up in Fanalei but now resides in the capital Honiara; she travels home for every holiday to bring knowledge and resources back to her family. Ethel is quick to share a story with the children in the village about what their island used to be like and what they can do to help preserve it. She showed us where the church used to stand, the centrepiece of the village. What’s left is now are a few slabs of concrete protruding from the sand. She’s not about to let her home be destroyed despite conditions worsening every year.

“When we have really high tides now,” she said as she poured me a mug of tea, “we can practically move around the houses in canoes.” I looked around at the bone dry coral paths that ran through the village and couldn’t help but be sceptical. And with the low tide revealing white sandy shores, it was hard to see Fanalei as anything but an idyllic atoll.

Chief Wilson had nonchalantly informed me that the next high tide would be at 4am, which was good for the residents because they’d be asleep and not be bothered by its rising water. I promptly forgot about it until the next morning at four o’clock when I woke to use the bathroom and descended the steps of Aunt Ethel’s house, only to drop straight into knee deep water. After checking that I hadn’t involuntarily pissed my pants, I shone my torch out to see, as Ethel and Wilson had predicted, the whole island underwater. Thankfully it was just a ‘regular’ high tide and didn’t require a canoe to get to the toilet.

Earlier that day I had asked some of the kids to help me paddle across the lagoon to Fouele to see it for myself. Fouele is a growing community. Situated on the side of a mountain, it’s much safer than Fanalei but the trade-off is a life spent traversing mud instead of sand and coral. It has fertile land and infrastructure. Already, nearly half of Fanalei’s residents have made the move to Fouele to be closer to their crops and to the school their children attend. They’ve brought some of Fanalei with them, too. The paths closest to the tiny dock (and only entrance) are paved with coral stones collected from the island. A walk from the curated ‘front’ of the village to the construction at the back shows a community being built from the ground up.

Although, the migration from Fanalei to Fouele is well under way,  some of the residents aren’t ready to say goodbye just yet. This is their home, for some over 100 years. After paddling 20 minutes each way, I understood why everyone in Fanalei was so lean. But I also started to wonder why they insisted on staying there when their jobs and schooling were conducted across the lagoon.

Two hours away by boat, in another lagoon, is West ‘Are’are, a village similar to Fanalei in almost every way. It too is a flat atoll where previously fertile ground is now spoiled regularly by sea water. Unlike Fanalei, there’s a school in West ‘Are’are that would allow children to stay on the island for longer. Here too, the community are starting their move across their lagoon to higher ground, but unlike in Fanalei, the people of West ‘Are’are are impatient. They’re impatient because they know exactly what’s happening to their home, and they want to leave before tragedy strikes.

For those living in West ‘Are’are, climate change is a term they’ve come to know and understand. Through sporadic radio play and messages from the city, they’ve learned what climate change is, what’s causing it, and what it means for them. In fact, when we arrived, we were greeted by an organised assembly of speakers to discuss how their island had been hurt by climate change, and given a meticulously handwritten document outlining, in great detail, what needs to be done for them to resettle and retain their livelihoods through land and crops.

It’s not just the sea rise that’s causing problems, either. The communities have both experienced unusually cold and rainy weather, and along with it, an increase in cases of pneumonia and the common cold. The water might be rising up from beneath them, but it’s also pouring down from above.

“We know we need help but we don’t know who is going to help us.”

Then there’s us, a group of strangers from New Zealand. The nature and brevity of our visit isn’t lost on Angelica, a young teacher who minced no words when addressing our group. “You’re here collecting information.” she said. “But what are you going to do with it? Don’t just take the information. Do something.”

Do something. The thing with climate change is that it takes a whole lot of people doing something for anything to change. And sitting there, listening to people who’ve done nothing to contribute to climate change, ask simply for something to be done, I felt embarrassed. In New Zealand, it’s so easy to ignore things when they’re not happening on our doorstep. But for these people, it’s already here and the rest of the world needs to step up.

Back in Fanalei, Aunt Ethel showed me a patch of sand and grass which she had already designated to become a play area for the kids. It’s in a precarious spot, directly beyond where the village church used to stand and at the mercy of the tide. But Ethel also plans to build up the small concrete wall that exists there and strengthen the shores all around the island. She has big plans for the place and she’s employing her young nieces and nephews to help. “They need to know what their island was like,” she said, “so that they can help save it. It’s up to them now.”

Like the people of West ‘Are’are, Ethel and Wilson know that Fouele is where their families will be based sooner rather than later. “Yes, we can move but not right now,” Wilson said, “We love this place. It’s our home.”