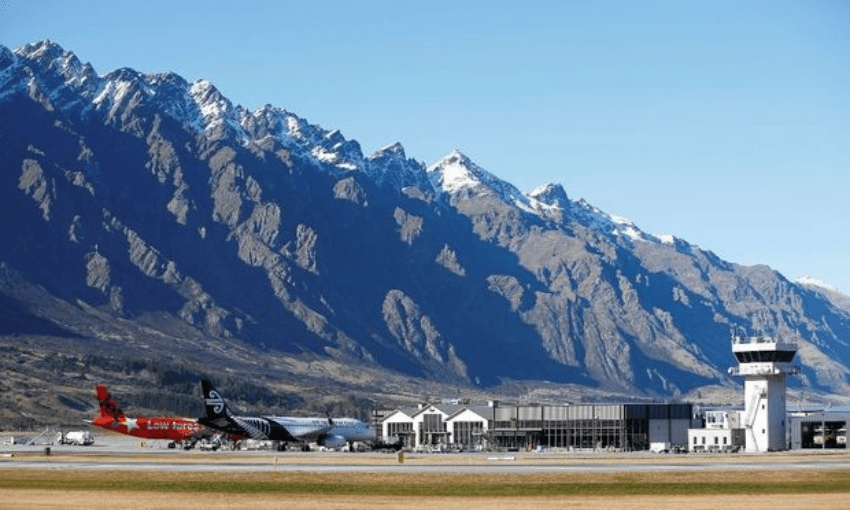 The Bulletin: Too many tourists? The Queenstown Airport decision

An airport expansion in Queenstown has been cancelled, after strong opposition from the community. Simply put, they didn’t want the noise, and they didn’t want the numbers that it would’ve brought. An airport expansion may now take place at Wanaka instead. There’s a lot of good local coverage on this from Crux and Mountain Scene, with Crux especially doing a fantastic long-running job on the issue.

For example, the ideas talked about in this Crux piece have really wide implications for the rest of tourism in New Zealand. Basically, local mayor Jim Boult says the decision is a recognition that the nature of tourism is changing, away from being about getting as many bums on seats as possible, to providing high value experiences. It’s the equivalent of shipping a raw log overseas, versus turning it into a table first.

The strain of too many tourists is being seen all over the country: From rocketing house prices in the Lakes District as housing gets converted to AirBnb’s, to fury at convoys of freedom campers leaving rubbish and… other things… on the side of the road, to deaths on the Tongariro Crossing, to glaciers rattling with the drone of helicopters, to threats of high country walking tracks being closed by farmers who can’t cope with the numbers. And as this NZ Herald article notes, in a few years we’ll have the America’s Cup right in the middle of the peak season, which will put immense strain everywhere.

It was only in the last week that Cabinet approved a tourist tax – basically a shakedown of some arrivals at the border for a whopping $35 – with legislation likely to pass next year. The money from that will go into conservation and tourism infrastructure, but was opposed by tourism industry groups, who now say they’re “prepared to accept” it if it’s spent wisely. Their concern (which seems fanciful, but I may be wrong) was that tourists would be put off flying to New Zealand if they also had to pay the equivalent of a fancy lunch at the border.

But if a few tourists were put off coming by that, would that really be so bad? There are 3.6 million tourist arrivals each year, and it’s growing. This piece from the NZ Herald in January does a great job of arguing where tourism needs to go – New Zealand must find ways of playing up the unique aspects of coming here, and charge accordingly for the privilege.

Finally and as an aside, Crux editor Peter Newport wasn’t always the editor of Crux – he was once a contributing writer for us. And this piece he did for The Spinoff last year, about how the tourism boom manifested itself on the ground, remains a must read.

Secondary school teachers have now rejected a pay offer from the ministry of education, along with primary teachers, reports the NZ Herald. The PPTA union want a 15% rise, along with other demands such as an accommodation allowance for teachers in areas with high rental costs, and a small increase in non-contact time each week. Delegates to the conference voted unanimously against an offer they called “insulting,” reports Radio NZ. They say negotiations will continue, but if a new offer isn’t made and accepted in the near future, they’ll start talking about industrial action.

Incidentally, education minister Chris Hipkins returned temporarily from parental leave to speak to the PPTA conference. His view was that the offer secondary teachers wanted was far too high – “out of the ballpark,” as he put it.

The government has found itself in a position, which in some ways it would have anticipated, of having demands by multiple professional groups going beyond what it was initially willing to offer. What might have been more of a surprise is the militancy these disputes have then taken on, with primary teachers, nurses and public servants all showing they were ready and willing to go on strike.

National MP Jami-Lee Ross is stepping away from parliament for an open ended period, to deal with a personal health matter. Now I know what you’re probably thinking here – was he the leaker of Simon Bridges’ expenses? It’s “unrelated”, insisted Mr Bridges at a press conference he conducted yesterday, which Newshub have a video of. But that won’t stop questions swirling around as to whether he is the leaker, reports Politik.

A crisis over tahr-culling appears to have been averted after minister Eugenie Sage struck a deal with hunters, reports the NZ Herald. Under the new plan, 6000 of the creatures will be culled before November, with another meeting planned for after Christmas to see if further culls are needed. Bucks will also be left for hunters to have a crack at, with the cull aimed at females. Tahrs are considered a pest, but there are also thriving commercial and hobby hunting groups that enjoy shooting them, who were outraged about earlier plans to cull 17,500.

The NZ Herald are doing their Mood of the Boardroom breakfast today – it’s basically a business confidence survey with croissants. They’ve also released a range of stories that have come out of a business leader survey they’ve done, so if you’re interested today and tomorrow would be good days to pick up newspapers. In general terms on the political angles, business editor-at-large Liam Dann has written about what the survey shows government needs to do to win business over.

This could turn into an interesting entry into the various free-speech debates that have been going on this year. A billboard put up in South Auckland that calls on parents to not ‘risk’ vaccinating their children will be taken down, reports Stuff. I’m putting ‘risk’ in scare quotes, because it’s not a scientifically credibly position (and don’t @ me on this please) As this piece outlines, vaccine warnings can lead to delays in parents getting their kids vaccinated, which can then result in disease outbreaks, illness, and even death.

From our partners, Vector’s sustainability manager Karl Check explains why the company is pushing for more urban forests, despite recent storms in Auckland bringing trees down on powerlines, and cutting electricity to parts of the city.

Right now on The Spinoff: Actual expert Dr Nikki Turner writes about the anti-vax billboard, and the bigger problem with trust in scientific advice. Mike Metcalfe has written a first person piece about the double life of being a ‘high functioning’ alcoholic. Professor Andrew Allen argues NZ’s rejection of GM technology is pigheaded and risky.

And welcome to our new partner for the Politics section – Flick Electric. Editor Toby Manhire writes about how that means we’re going to expand out politics coverage, which I for one am very excited about.

The meth contamination testing hysteria didn’t come from nowhere, and freelance journalist Branko Marcetic has done the legwork to outline some of the characters involved in creating it. Part 1 has been published on Newsroom, and is an immensely detailed timeline of how a crisis was constructed, and how that benefited some people commercially. Here’s an excerpt:

“Who are Powell and Stratford? According to Powell’s page on the website of the Independent Forensic Practitioners Institute, a forensics industry body that he’s the president of, Powell is a professional member of the Royal Society of New Zealand who has a PhD in geology, is licensed to operate x-ray equipment, and has a Post-Graduate Diploma in forensic science.

Despite Powell’s science background, the Forensic and Industrial Science Ltd. website nonetheless contains questionable information, telling visitors that meth contamination “is generated from its use” and that it “can pose a risk to inhabitants’ health”.

Meanwhile, according to his LinkedIn page, Stratford lacks even this background in forensics or chemistry, instead boasting a Bachelor of Science (Honours) in Maritime Business. Prior to starting his meth-testing business, Stratford worked as a professional coach for business executives, a business consultant, the general manager of two companies promoting sustainable infrastructure projects, an account manager for a risk management firm, and an underwriter for a marine liability firm.

Over the past six years, Stratford has acted as something like the de facto face of the meth-testing industry, frequently quoted in media reports making alarming claims about the extent and danger of meth contamination in New Zealand.”

The Highlanders are trumpeting being what they say is the most popular team in Super Rugby, reports the ODT. How could they make such a claim? The team says they’ve had the highest average home attendance over the season, with an average of 15,677 coming through the turnstiles each game, which they say makes them an exception to declining crowd numbers. But there is a twist in the tale – this article from Stuff earlier in the year shows their crowds plummeted between 2015 and 2017.