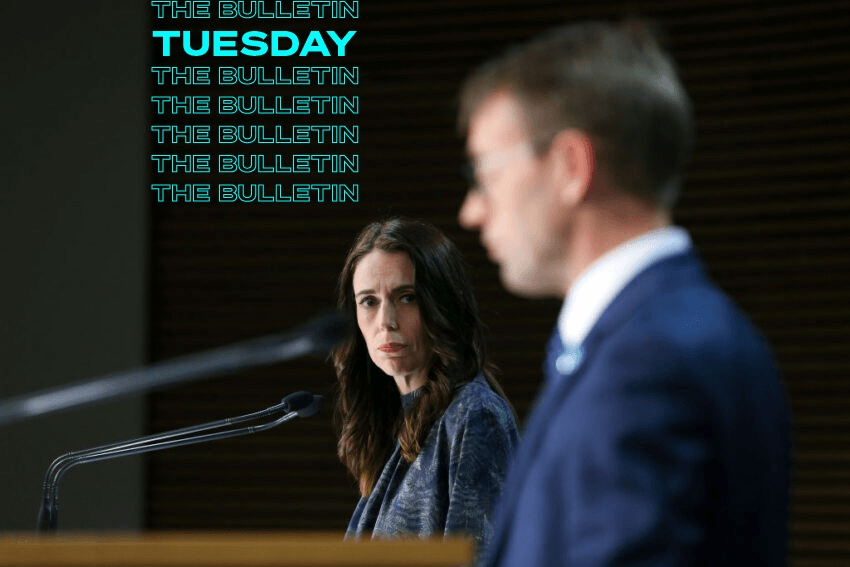 Auckland’s lockdown will slowly ease as the government’s Covid-19 minister concedes the virus is here to stay, Justin Giovannetti writes in The Bulletin.

The sense from the ground floor of the Beehive. In her opening remarks at yesterday’s 4pm briefing, the prime minister spoke about the elimination strategy in the past tense. The approach had given the country many months without Covid-19, but increasing vaccination levels and the delta explosion meant it was time to accelerate towards something different. The director-general of health then spoke about elimination in the present tense. Ashley Bloomfield said that finding cases and smashing them remains the hallmark of the country’s response to the virus.

Of the press conferences I’ve covered in the Beehive theatrette, yesterday’s was one of the most confusing. Nearly any headline I write from one part of the afternoon’s comments could be contradicted by some other portion of the two speaking. But first, let’s get into the facts from what was probably the most significant announcement since the country adopted the elimination strategy more than 500 days ago.

Auckland will remain in level three but restrictions will be phased out over the coming weeks. The Spinoff reports that the city is exiting lockdown through a new way of managing Covid-19. Instead of a move down to level two, it now needs to move up through three steps. Step one starts at midnight tonight and allows for groups of up to 10 people, from two bubbles, to meet outdoors. Kids can go for playdates, friends can meet up for a beer or walk. The talk of bubbles is gone as you can meet up as often as you’d like, within those rules. Early childhood education will return and people can move about the city for recreation like going to the beach, sailing and lawn bowls. This is not an exhaustive list, simply some highlights from Ardern. Steps two and three further relax restrictions, but moving to them isn’t based on vaccination levels, rather cabinet’s discretion.

Four to eight weeks. That’s the expected time necessary to move up the steps, according to Bloomfield. It marks the transition from the elimination strategy to what comes next. From tomorrow, that means the period could stretch out to Dec. 1.

Covid-19 will remain in New Zealand. Speaking after the press conference, Covid-19 minister Chris Hipkins said the country can no longer eliminate the virus, according to the NZ Herald. “We have been trending in that direction for the past few weeks and I think people won’t be too surprised by that,” he said. Less than a week ago, Hipkins stood in parliament and said that the National party’s Covid-19 plan would allow the virus into the country at Christmas.

Beyond the new steps in the alert levels, very little else is clear. Make no mistake, while the rules are changing in New Zealand and the clarity of the four alert levels is gone, the country now finds itself in a position people from around the world have been in before. According to the prime minister, this was always the plan. Without certainty, Aucklanders will need to deal with significant grey area and interpretation is now key. In many cases, even officials won’t know. As an example, I asked yesterday whether you can pop into a friend’s house to use the toilet after some wines in the backyard. Ardern said no: “If you don’t have a good bladder, don’t stay for long.” Bloomfield then said that it would be fine provided you went in the house alone. This is the messy world of dealing with Covid-19.

There are other pressing questions that are significant. Jack Tame wrote for One News that the government’s plan is a roadmap without signs. The plan has no vaccination targets, something that is at the centre of Australia’s reopening efforts, as well as no dates and no metrics to use to understand cabinet’s thinking. The plan is silent on what happens if case numbers increase, something modeller Shaun Hendy has warned is now inevitable, according to Stuff. There’s no mention of what will happen with Auckland’s border, nothing on vaccine mandates and no hint of what comes next. This new plan doesn’t end with Auckland moving to level two. Once the city hits level three step three, “we will likely move to a framework that then reflects a more vaccinated population,” said Ardern.

Increasing numbers means increasing strain on the health system. New Zealand intensive care specialists have in recent days warned, according to Newshub, of the risks of a widened outbreak on their limited resources. As modelling expert Michael Plank noted in comments to the Science Media Centre yesterday, “the Australian state of Victoria has gone from around 20 cases per day to 1,500 in just six weeks, and there are currently 96 Covid patients in ICU. This could happen here and it would put immense pressure on our hospitals.”

What to do with another grim report on perinatal mental health.
By Anna Rawhiti-Connell
Bulletin editor
3rd May, 2022