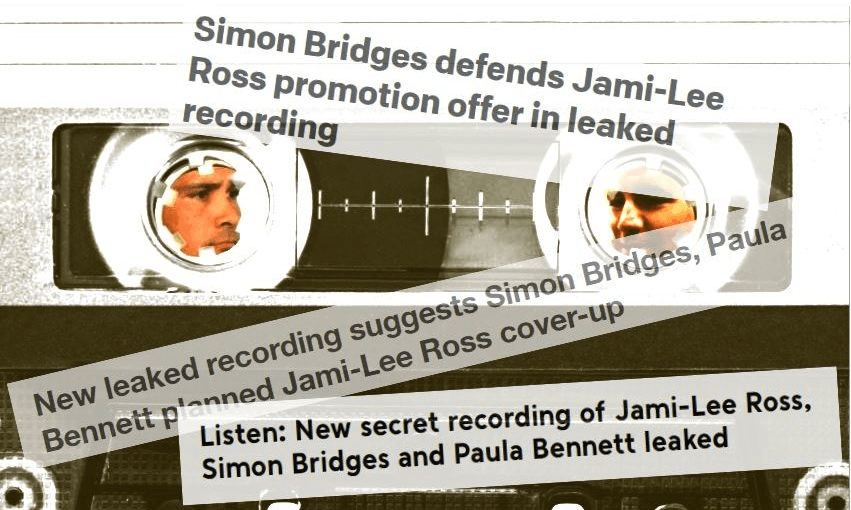 A new week has dawned, and to start it off, another conversation secretly recorded by Jami-Lee Ross has been leaked to Newshub. So what does it say, and what does it mean?

The leader of the opposition goes on all the major TV and radio shows on a Monday morning, and generally the interviews follow similar issues. This morning, Simon Bridges’ day has been dominated by a brand new leaked recording of him and National’s deputy leader in conversation with now rogue-MP Jami-Lee Ross.

The conversation takes place in the leadup to a press conference that would announce that Ross would be away indefinitely on medical leave, which is acknowledged to be both true and not necessarily the real reason why he’s being pushed aside. Bridges and Bennett are urging Ross to go quietly, and in return they won’t completely wreck him.

“I give you my 100% assurance that if you go with the statement along the lines we’ve talked about, I will never badmouth you in relation to this – privately, publicly, in background, off the record in any way,” says Bridges on the recording. That was the leverage for both sides basically – it didn’t have to be about one side beating the other, they could both walk away from the episode intact. As we can see now, that’s really not how it played out. Not at all – both sides ended up launching nukes at each other in the space of a wild week, leaving scorched earth in their wake.

The tape underlines just how colossal a fuck up it was for Bridges to describe Ross’s reasons for going on medical leave as “embarrassing” during that press conference. Ross was reportedly furious about that, and it arguably breaks the assurance given by Bridges on the tape – depending on whether you consider a medical issue being described as embarrassing as being akin to badmouthing a person.

One area where there will be incredibly heated debate will be around the allegations of harassment. On the tape, Ross is heard to ask for more information about what he is said to have done. In response, deputy leader Paula Bennett pivots to talking about disloyalty, which she says would be enough to convince caucus to boot him out.

On the one hand, it could be argued that the biggest victims if it all were to come out would be the women themselves. In the vast majority of cases, that is how these sorts of things go. Keeping it quiet, and more importantly not giving Jami-Lee Ross information so that he could target his accusers for revenge, would do more to protect them than outing him would. Mr Bridges told Newstalk ZB that it was what the women wanted. It also arguably gave Jami-Lee Ross better protection for his own mental health – minimising media attention would be one way to ease the pressure on him.

On the other hand, it looks awfully like a cover-up. Perhaps one made for the right reasons, but a cover-up all the same, with the political needs of the party seemingly put first. One thing to keep in mind about all of this is that Jami-Lee Ross was the chief whip of the party, a position which involved information from colleagues and enforcing the will of the leadership. That made him incredibly dangerous if he decided to go rogue, and, hey, here we are. There is also a moment at the end of the tape where the leaders tell Ross that if he follows their instructions (ie, isn’t disloyal any more) then he could return to parliament, and even be promoted. If the accusations of harassment and bullying against him were so serious, why would they allow him back at all? They were either bullshitting him to get him to go quietly, or weren’t as concerned about the allegations after all.

There’s one more question in all of this – where did the tape come from? Newshub isn’t saying, but it seems almost certain to have come from someone in Jami-Lee Ross’s camp – there’s absolutely no reason why someone in Simon Bridges’ camp would want this story to come back into the news all over again. As well as that, it follows the release by Ross on to social media of other secret recordings (one phone call, one personal conversation) and a text message to RNZ. In the case of the previous two tapes, Ross was personally brandishing them, but in this case we can’t know for certain if the MP, who, remember, was in a mental health ward just a fortnight ago, was directly involved.

It all shows the one big weakness in the Latin phrase that gets bandied around whenever there’s a mystery like this to assess. Cui bono,who benefits? Because it’s hard to see how anyone has benefited at all from this latest tape release.